Animated kiddie franchise more about selling toys than a narrative for the whole family. 3 Stars

In an effort to stretch more miles out of its Monster High franchise, Mattel has created a new origin story for its creation in Welcome to Monster High.

In an effort to stretch more miles out of its Monster High franchise, Mattel has created a new origin story for its creation in Welcome to Monster High. Featuring some new looks and characters for the franchise in an obvious effort to sell more toys and merchandise, Welcome to Monster High is aimed squarely at pre-adolescent girls with its almost completely female line-up of principal cast members. For that audience, this new CG animated film may prove fun or it may confuse diehard fans who already had in mind the origin story of the school and may resent this somewhat different take on it.

Having gone for centuries without a best friend, Dracula’s (Michael Sorich) daughter Draculaura (Debi Derryberry) is eager for one and also dreams of there one day being a place where all monsters can congregate peacefully and without hiding in the shadows. After a concerted search, she locates Frankenstein’s Monster daughter Frankie Stein (Cassandra Morris) and together the ghouls locate other friendly monsters of their own age: the Wolf Man’s Clawdeen (Salli Saffioti), the Creature from the Black Lagoon’s Lagoona (Larissa Gallagher), and the Mummy’s Cleo De Nile (also Salli Saffioti), and together with Dracula’s help, they round up enough other monsters to open a school educating the creatures about the human world from which they still hide. Amid all their joy of finding one another, however, comes one Gloomy Gus: zombie Moanica DeKay (Cristina Milizia) and her all-boy zombie crew who are determined to destroy the human world if she can convince the monsters at the school to join with her.

While the writing by Shane Amsterdam, Stephen Donnelly, and Dana Starfield doesn’t contain enough sophisticated wit to make Welcome to Monster High as entertaining for adults as it would be for the young kids in the family (Hotel Transylvania managed to traverse both mind sets much more skillfully), there are some decent puns along the way and a couple of funny characters and situations (a zombie attack that is so slow the monsters have no trouble fighting it) add a measure of amusement for young and old. The animation, while bright and colorful, is not especially groundbreaking, and the five leading lady ghouls look very much like variations on Barbie, perhaps not a surprise since Mattel is the producing entity of this enterprise.

Voice work is more than competent. Michael Sorich and Debi Derryberry have a good father-daughter rapport as the Draculas, and she especially adds good humor and a positive spin on everything to keep things light even when the evil Moanica is at her worst. As voiced by Cristina Milizia, Moanica is a typical mean girl of this current era, putting down everyone’s hopes and dreams and always issuing threats and taunts. Jonquil Goode plays singing star Tash, the human that the ghoul girls all think is the living end, and her surprise revelation and the ongoing threat of Moanica mean that this likely isn’t the last we’ve heard from these characters or this franchise.

The program is framed at the widescreen television aspect ratio of 1.78:1 and is presented in 1080p resolution using the AVC codec. Sharpness is vivid throughout, and colors really pop with the mix of bright primary hues that streak through the hair and clothes of all of these various monster kids. Contrast has also been dialed in to perfection. The presentation has been divided into 12 chapters.

The DTS-HD Master Audio 5.1 sound mix is rather sophisticated for a children’s animated video. The music, of course, gets the full run of the fronts and rears, and there are some panning effects through the soundstage that one might not be expecting. Dialogue has been well recorded and has been placed in the center channel.

Ever After High Special (23:24, HD): the children of Snow White and the Evil Queen vie for top popularity in this animated television special.

Unless one is a dedicated fan of the Monster High franchise and will be bothered by some changes to characters and the origin story, Welcome to Monster High is a pleasant enough animated tale for tots. The high definition image and excellent sound design is a surprisingly ambitious effort for a youth market disc release but not one without some merit.

For kids, I would think it would be entertaining enough. I tried to be fair in assessing the story and animation quality with its specialized audience in mind.
M 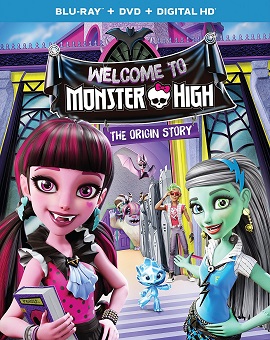