Henry James’ 1880 novel Washington Square is perhaps best known in its play and movie adaptations entitled The Heiress. While William Wyler made a masterpiece of a film based on the Broadway hit, Agnieszka Holland’s 1997 film Washington Square hews more closely to the original text and tenor of the novel with its typically muted Henry James tone and smallish dramatic effects rather than the more expansive (and more satisfyingly triumphant) alterations found in the play and film. This 1997 movie is well made, competently acted, and splendidly produced, but drama mavens will likely prefer the more urgent and dynamic performances and mood of Wyler’s film.

Awkward, charmless heiress Catherine Sloper (Jennifer Jason Leigh) has few romantic prospects until she meets the charming but penniless Morris Townsend (Ben Chaplin) at her cousin Marian’s (Jennifer Garner) engagement party. Morris’ lack of both social position and a profession makes his courting of the plain Catherine highly suspicious to her cold, calculating father Dr. Austin Sloper (Albert Finney), and he discourages his daughter from entertaining fancies of a future marriage with the wastrel. He is certain that Catherine’s future inheritance of $30,000 a year is what is capturing Morris’ attention, not any of her physical and emotional attributes. Catherine’s flighty widowed Aunt Lavinia Penniman (Maggie Smith), a romantic at heart and half in love with Morris herself, heartens her niece to elope, but Catherine admires her father too much to do anything behind his back. She’s willing to wait to prove the legitimacy of the love she and Morris share, even to the point of enduring a year-long trip to Europe separated from her beloved as proof to her father that the feelings are real. But will Morris really wait for Catherine, and is her wealth his only real goal in this unusual courtship?

Director Agnieszka Holland begins the film magnificently with a slowly moving camera that lowers us ever so gently into this nineteenth-century world of fine manners, clothes, and furnishings, but it’s almost the last such evidence of such camera fluidity in the movie, the majority of the film shot rather staidly and starchily immobile. The screenplay by Carol Doyle is certainly truer to James’ novel than The Heiress was (but even here the director and writer take some feminist liberties with Catherine’s evolution from a pitiful shrinking violet to a quietly authoritative woman of substance), even if the ending of this movie doesn’t offer the viewer nearly as dramatically satisfying a capper for the two men in Catherine’s life who betray and disappoint her: her father and her lover as the Heiress adaptation fashioned ending with a grand flourish of victory for Catherine and retribution for Morris. Doyle’s script also doesn’t attempt to plumb the depths of Dr. Sloper’s conflicted feelings for his daughter even if he is proven completely right in his negative estimation of Morris.

Albert Finney offers the best performance in the film as Dr. Sloper, dryly witty and firm without undue harshness as the father looking out for his inexperienced, overly infatuated daughter. Jennifer Jason Leigh certainly grows noticeably as Catherine throughout the film making her journey from naïve simpleton to more resigned matron wholly believable, but she lacks spark and dynamism throughout (there is no comparison in her slightly colorless performance to what Olivia De Havilland brought forward as Catherine in The Heiress). Ben Chaplin likewise cuts a handsome figure as Morris Townsend but lacks the enticing charisma of a charming charlatan. Maggie Smith effects an American accent as Aunt Lavinia, but those expecting some of the typical Maggie Smith wryness won’t find it in this characterization at all. In smaller roles, Judith Ivey is fine as Dr. Sloper’s disapproving sister Elizabeth, Jennifer Garner is pert and pretty as cousin Marian, and Betsy Brantley is excellent as Morris’ faithful and loving sister Mrs. Montgomery.

The film’s theatrical aspect ratio of 1.85:1 is faithfully delivered in a 1080p transfer using the AVC codec. The image is clean and sharp throughout with excellent color saturation levels and good if not quite great black levels. No age-related visual artifacts mar the viewing experience. The movie has been divided into 8 chapters.

The DTS-HD Master Audio 2.0 stereo track offers artifact-free listening with no evidence of hiss, crackle, flutter, or popping. Dialogue is usually easy to discern except in moments when Jan A.P. Kaczmarek’s background music overpowers more hushed speech on-screen. Otherwise, the music has a nice spread through the sound field while appropriate sound effects are judiciously placed.

Audio Commentary: director Agnieszka Holland offers a start-and-stop commentary for the film. While she reveals some surprise information (Donald Sutherland was her second choice for Dr. Sloper), she often spends too much time describing what we’re seeing or explaining motivations which are patently obvious. She also errs several times in the early going calling the book’s author “Henry Miller” though she gets it right later on.

Agnieszka Holland’s Washington Square will likely satisfy purists who want their Henry James plots more inwardly focused and dramatically muted, but for others, William Wyler’s The Heiress will probably be the more appreciated version of this celebrated story. The Kino Blu-ray looks and sounds splendid which fans of the movie will surely appreciate. 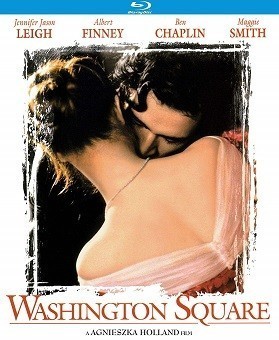