Forum List What's new Dark Style Change width
Log in Register
What's new Search
Menu
Log in
Register
Navigation
Install the app
More options
Dark Style
Close Menu
Posted on February 26, 2018 by Kevin Collins
You are using an out of date browser. It may not display this or other websites correctly.
You should upgrade or use an alternative browser.
They’re big. They’re bad. They scuttle along in caverns miles beneath the Earth 3 Stars

They’re big. They’re bad. They scuttle along in caverns miles beneath the Earth – until an earthquake opens paths to the surface. Now, these monsters of genus Arachnida are invading our world with deadly force! With top special effects co-designed by King Kong’s Willis O’Brien, The Black Scorpion is horror with a sting more lethal than the king-sized ants that overran Los Angeles’ sewers in the classic Them! Can humankind survive these invincible juggernauts? That fate rests on the shoulders of Hank Scott (1950s monster-movie stalwart Richard Denning) as the creatures rip a train from its track, snatch a helicopter from the sky and, in the film’s most gripping sequence, battle each other in their subterranean lair.

Saw this where I worked One of the best ifties sci-fi films.

I don't suppose any of the special features will be HD? The Harryhausen Animal World and Pete Peterson footage made the original dvd release an absolute must-have. That disc was a real testatment to Peterson's talent.

Interdimensional said:
I don't suppose any of the special features will be HD? The Harryhausen Animal World and Pete Peterson footage made the original dvd release an absolute must-have. That disc was a real testatment to Peterson's talent.
Click to expand...

THE ANIMAL WORLD is available in its complete 80-minute form through the Warner Archives, on DVD only. Trust me, though, the Harryhausen sequence (9 minutes) is the only worthwhile thing about it.
Last edited: Feb 22, 2018

That's all anyone really wanted to see! I never did pick up the 80 minute version. I don't suppose that'll ever make it to blu-ray.

The last edition (I have the first, and I'm sure many do) from WB was in its correct AR and upscaled to 4K is a stunner. I really like the movie, but I don't need a third copy, a pass for me.
Last edited: Feb 22, 2018

The Warner Archive DVD that I reviewed three years ago looked very good, so I'm sure that the Blu-ray will be superb.
B

It will be fun to watch back to back with Them!

And don't forget the other notable, Trantula!

Just received and watched the Blu-ray of "The Black Scorpion" tonight.
The encoding is poor,
and this only adds to making all the many (and might I add, many) opticals look even worse than they should:
All the dissolves stay in the lower rez optical from the beginning of the shot going into the dissolve and all the way to the end of the shot coming from the dissolve -- Yes, I know it was done a lot in the 1950s.

Yes, there are many composite optical shots in the film, but this encoding is poor for many "clean" shots.
I really don't understand what happened here, as Warner usually does nice work.

But, opticals aside (which is a baked-in problem), the encoding on this disc makes for some shots (even those not in an optical) look messy.

Weakest job that I have even seen from Warner Brothers.

Some people may not notice, but I could not help.
It is still nicer to have than the 1.33 DVD.

aPhil said:
Some people may not notice, but I could not help.
It is still nicer to have than the 1.33 DVD.
Click to expand...

And I said encoding, but it has a good bit-rate and it may be the master for the Blu-ray. Again, many may not notice. I would be interested in other opinions

I thought it looked great. I dont go looking for encode issues, i look at how the film appears on my television and was very happy

Here is part of the review from George Reis at DVD Drive-in. He has been reviewing since Laserdisc days so I always trust his reviews:

Through the years, Warner always seemed to give attention to THE BLACK SCORPION, as it was previously available on VHS, laserdisc, and then on full frame DVD. Several years ago, the Warner Archive Collection re-released the film on made-on-demand DVD (finally in widescreen), and now in this noticeably better-looking Blu-ray. The film is presented here in 1080p HD in a fitting 1.78:1 aspect ratio (previous boxy, full frame transfers appeared awkward). The black and white image is very crisp with rich detail, and there’s healthy filmic grain structure on display. It also features good grayscale, deep black levels with plenty of shadow detail. For a 1950s B movie, the DTS-HD Master Audio 2.0 track is pretty clear and solid. Optional English subtitles are included.

Maybe is should put this in the What Bugs You threat, but kid in the movie, I wanna throttle him.
You must log in or register to reply here. 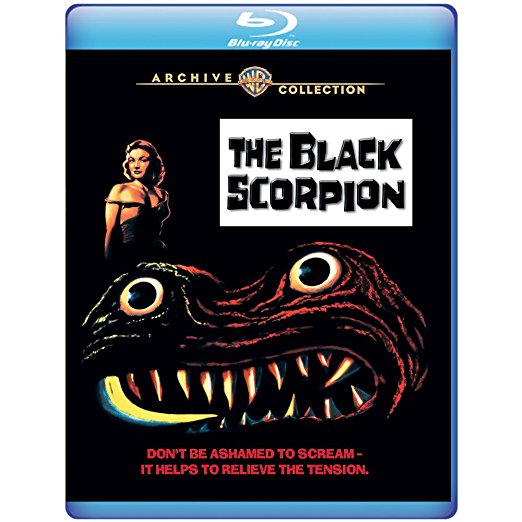