Billed as a zombie romantic comedy, Warm Bodies is a much better film than it deserves to be, thanks to a clever script and the performances of its leading cast.

Poor zombie “R” (Nicholas Hoult) leads a pretty dull life, wandering aimlessly with his fellow zombies (known as “corpses”) in a deserted airport in search of fresh humans to feed on, and listens to John Waite records inside the cabin of an airplane. His best friend, “M” (Robert Corddry), grunts that they should go to the city for food. R, M, and a group of other corpses barge into a medical facility where a group of freedom fighters are gathering supplies. When R sees their leader, Julie (Teresa Palmer), it’s love at first sight. Other than the issue that R is a member of the walking dead and Julie is very much alive, R also killed and ate Julie’s boyfriend, Perry (Dave Franco), including his brains, which gives R access to Perry’s memories of Julie. R feels he must save Julie from his fellow corpses, and takes her back to his airplane to show her his collection of trinkets. His time with Julie has triggered something inside, causing his heart to begin beating, and causing a chain reaction among the corpses. This does not bode well with the Boneys, corpses who have lost their skins and souls and will attack anything living or dead, which helps set up an exciting and climactic third act.

Told almost entirely from R’s point of view through voice-over, Warm Bodies is a film that shouldn’t work as well as it does. Writer-Director Jonathan Levine, working from Isaac Marion’s novel of the same name, brings a fresh approach to the zombie movie without spoofing or parodying the genre, using dark humor to make it more approachable for general audiences and weaving in references to William Shakespeare’s Romeo and Juliet without being overly obvious. It also helps to have a talented cast that help to make the film believable. Nicolas Hoult, better known to audiences as Hank/Beast from the more recent X-Men films, has the almost impossible task of portraying his character by showing little emotion and speaking in mostly mono-syllabic grunts and groans. Teresa Palmer has believable chemistry with Hoult, and shows a vulnerable young woman underneath her tough exterior. John Malkovich has a nice supporting role as Julie’s father who is also leading the fight against the corpses and Boneys. Robert Corddry is used for additional comic relief without being annoying, as I’ve found in the few movies I’ve seen him in. Warm Bodies is a surprisingly good film, better than it possibly deserves to be.

Warm Bodies was photographed in Super 35mm and completed as a 2K digital intermediate. Lionsgate’s 2160p upscale has been graded using Dolby Vision HDR. My system does not support Dolby Vision, but when played back using HDR10, the result is a slight increase in detail in makeup design including black veins and scars in the characters’ skin. Overall, the movie was originally graded in typical apocalyptic desaturated colors and leaning towards greys in its palette. That color scheme is carried over in this HDR version, but allowing for more gradients of color and better contrast, allowing for increased shadow detail. In the flashback sequences, HDR is used to make the colors more vibrant. Colors also become more vibrant as we near the conclusion. Another fine catalog release from Lionsgate.

Lionsgate has upgraded the soundtrack to Dolby Atmos for the 4K UHD version of Warm Bodies, and is backwards compatible with a Dolby TrueHD 7.1 core. Compared to the Blu-ray’s DTS-HS MA 7.1 track, the Atmos track, even when played back in a 7.1 environment, has more defined LFE and surround activity with a much broader dynamic range. Dialogue is directed mostly to the center channel, but never gets lost in the mix. This is not an overly aggressive track, but is still impressive and more immersive. A Dolby Digital 2.0 mix optimized for late night listening along with a Spanish Dolby Digital 5.1 track have also been included.

NOTE: Warm Bodies is another Lionsgate release that defaults with English subtitles on when the 4K UHD disc loads.

As with most Lionsgate 4K UHD releases, all of the special features have been ported over and included on the 4K UD disc.

Audio Commentary with Writer-Director Jonathan Levine and Actors Nicholas Hoult and Teresa Palmer: This is a fun, lively track as the three reminisce on the making of the film.

Whimsical Sweetness: Teresa Palmer’s “Warm Bodies” Home Movies (1080p; 12:38): Actress Teresa Palmer documented much of the film’s production with her iPhone. Thankfully, she knew to hold the phone in landscape while she was recording.

Zombie Acting Tips with Rob Corddry (1080p; 4:30): Hal Rudnick of Screen Junkies interviews Corddry, intercut with faked behind the scenes footage, about his “method” acting style for his role as M.

A zombie movie that has heart, Warm Bodies makes for a nice date night movie for the Halloween season. The upgraded video and audio, along with the reduced price (under $20), make this a no-brainer (pun intended). 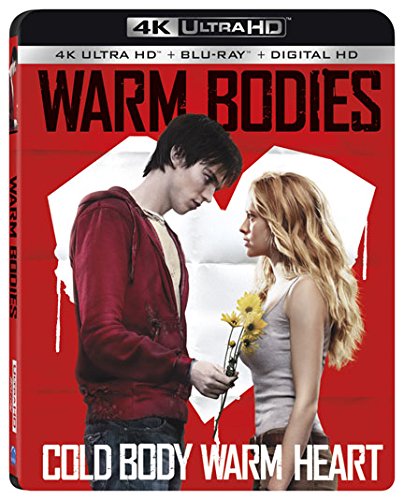