WARFRAME RAISES THE DREAD WITH GHOUL PURGE BOUNTIES ON PS4, XBOX ONE 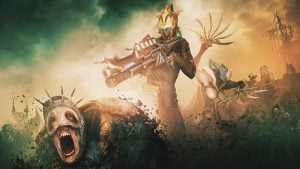 LONDON, ON – January 23, 2017 – Independent Canadian developer and publisher Digital Extremes injected a dose of gruesome action today in Warframe®‘s Plains of Eidolon with the Ghoul Purge Bounties. Led by a deadly four-pack of Grineer Ghouls born from sacks in the earth — each with unique attack patterns and new weapons — and extensive new Orbiter customization options, this New Year’s update is free and scheduled for PlayStation®4 and Xbox One today.

The grounds of the Plains have erupted with vile beings of Grineer origin – repugnant Ghouls that overrun their victims in a gruesome mass of limbs, toxin and violence. Players will encounter them via a Ghoul Alert, or by stumbling across their graveyards (where they are “born” from the ground), through Incursions or Bounties. 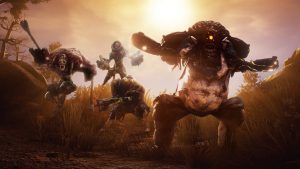 Four in all, these disgusting new Grineer include the Rictus Ghoul, who wields a deadly buzz saw it can ride to battle; the Auger Ghoul, armed with dual flame-throwers that double as drills it uses to dig down into the earth in one spot, disappear, and surface in another for a surprise attack; the Devourer Ghoul, a hideous, pustule-laden beast, attacks with a lengthy tongue, spiked fists, and a jet pack to thrust him forward to shred Tenno to bits; and the Expired Ghoul, who dons bomb-spiked gloves to beat and detonate enemies to pieces.

To counter this plague upon the Plains, Tenno can arm themselves with a handful of equally authoritative weapons. Prepare to wield the majestic Corinth, a double barreled shotgun that’s commanding and explosive up-close; the sleek, deadly Gunsen, a steel-bladed, fan-like weapon that slices the throats of unsuspecting enemies in a mini-second; the satisfyingly brutal four-barreled Quartakk rifle; and the Grineer favorite, a compact, high fire-rate, automatic Uzi dubbed the Stubba.

Keep your eyes on the sky, Tenno. Dynamic Weather has come to the Plains of Eidolon! This new system brings rain, lightning, rolling thunder, changing wind, and cloud patterns. With the inclement weather, there is also an increase of fish spawns; Grineer have reduced visibility while it is raining, and weather can change day or night. Stay vigilant to take advantage of its benefits!

Additionally, Focus 2.5 has arrived. It is the result of all the feedback and subsequent fine-tuning since the release of Focus 2.0 back with Update 22: Plains of Eidolon. Focus 2.5 brings with it more refunded Focus Points, reduced Node Costs, Shared Pool Capacity, and more.

The best is always last! Tenno can now personalize and decorate their own Personal Quarters with an assortment of cool items. Customize the Orbiter with a mini-stage, then select from posable Warframe figures, companion toys and beds, wallpaper, a fish tank and more to create a mini diorama of one’s own making. Plus, players can now invite a friend inside to visit!

Happy New Year, Tenno! Visit the official Warframe website at www.warframe.com and download Plains of Eidolon now for free. Join the community and the fun on PC, Xbox One or PS4. To keep up with the latest updates from the development team, be sure to followWarframe on Facebook, Twitter, YouTube and Instagram.

ABOUT DIGITAL EXTREMES
Founded in 1993 by James Schmalz, Digital Extremes ranks as one of the world’s top independent video game development studios. Originating with the co-creation of Epic Games’ multi-million unit selling Unreal® franchise including Unreal, Unreal Tournament – and all its iterations – Digital Extremes went on to develop Dark Sector®, BioShock® for the PlayStation®3, the BioShock 2 multi-player campaign, and The Darkness® II. The studio has reached its greatest critical and commercial success with the free-to-play action game, Warframe®, boasting a global community of more than 30 million registered players on PC, PS4™ and Xbox One. For more information about Digital Extremes, visit www.digitalextremes.com. To sign up for Warframe, visit www.warframe.com.

Me neither, but apparently it's pretty huge. I saw a few articles about it around the holidays that talked about how its grown and changed over the years with a pretty consistent user base.
You must log in or register to reply here.
Share:
Facebook Twitter Reddit Pinterest Tumblr WhatsApp Email Link