Forum List What's new Dark Style Change width
Log in Register
What's new Search
Menu
Log in
Register
Navigation
Install the app
More options
Dark Style
Close Menu
Posted on September 27, 2016 by Todd Erwin
You are using an out of date browser. It may not display this or other websites correctly.
You should upgrade or use an alternative browser.
Entertaining adventure epic 4 Stars

One of the most popular video game franchises of all time comes to the big screen in a big way, but for many, it is too much at once.

The Orcs have been destroying their home planet with the fel magic that their leader, Gul’dan (Daniel Wu), uses to not only obtain power but also to transport to other worlds. With their world in utter ruin, an army of Orcs are sent to conquer Azeroth, in hopes of finding a world to inhabit. But tribal leader Durotan (Toby Kebbell) and friend Orgrim (Robert Kazinsky) are starting to believe that Gul’dan’s use of fel magic may be what is destroying every world they’ve conquered and abandoned, and trying to live in peace, side by side with humans, might be the better answer. Llane (Dominic Cooper), the King of Azeroth, is getting ready for war with the invading Orcs, with help from Aduin Lothar (Travis Fimmel) and the once mighty wizard guardian Medivh (Ben Foster). The half-human, half-Orc Garona (Paula Patton), a slave to the Orcs but captured by the humans after a brief battle, ends up trying to be an ambassador of sorts to try and bring peace to both worlds.

I have never played World of Warcraft, the video game franchise this film (supposedly the first of many more to come) is based on. The screenplay, by director Duncan Jones and Charles Leavitt, poses many of the same problems David Lynch’s epic Dune had – trying to cram too much information, characters, and storylines into a single movie. As entertaining as the visuals were, I quite often found myself getting lost in the character arcs and subplots. Warcraft could have been two or three movies and possibly made more sense to those unfamiliar with the game. The effects, by Industrial Light and Magic, are often quite good, although we’ve seen much of this before in Peter Jackson’s Hobbit and Lord of the Rings movies. My other real complaint with the film was Paula Patton, not so much for her performance, but it was quite obvious she had a hard time speaking her lines with those giant tusks in her mouth – you would think the producers would want to re-record her lines without the speech impediment the tusks caused.

Warcraft was completed, per IMDB, as a 2K digital intermediate, although photographed in 3.4k on the ARRI Alexa XT Plus. It was also released to select large format theatres in Dolby Cinema (laser projection with high dynamic range). That all being said, the movie looks much different when comparing the UHD 4K upscale with HDR to the 1080p Blu-ray. While detail is slightly improved, as well as contrast, colors are a bit more subdued on the UHD version. Both versions look terrific, regardless, but there really isn’t any WOW factor on the UHD, which is something one would expect for a film of this type in this format.

Warcraft has an immersive and vibrant Dolby Atmos track which contains a Dolby TrueHD 7.1 core. The overheads are used sparingly, more for environmental sounds than anything gimmicky. At least, that was my experience in my home theater setup, which consists of a typical 5.1 configuration, plus left and right height speakers, and played back as a Dolby TrueHD 7.1 source with Pro-Logic IIz enabled. Dialogue is clear and mostly understandable (Paula Patton’s slurring through her tuscan dentures excluded), directed mostly to the center channel but panning across the soundstage where necessary. Surrounds are used extensively, creating a 360 degree environment almost throughout the feature, with LFE adding a nice low end to body slams, swords slashing into things, Orcs slamming their hammers down, etc.

As with most UHD releases, all of the special features can be found on the included Blu-ray edition of the film.

Gag Reel (1080p; 3:25): Mostly flubbed lines or giggles, but some are hard to discern why they were included.

The Fandom of Warcraft (1080p; 6:36): Focusing on BlizzCon, an annual convention for fans of Warcraft by Blizzard Entertainment.

Warcraft: Bonds of Brotherhood Motion Comic (108op; 53:47): Another story from the Warcraft universe.

Digital HD Copy: An insert contains a code to redeem a digital copy through Ultraviolet. Follow the instructions exactly, and those with devices that provide 4K UHD access to VUDU or FandangoNow can stream the film in UHD.

In-Game Content: On the same insert that contains the Digital HD Copy, there are three codes to redeem a copy of World of Warcraft for PC or Mac, a code to play Heroes of the Storm and claim Gul’Dan, and a code to play Hearthstone and claim Medivh.

A film mostly for fans of the popular video game, and it’s those that this home video release is also aimed at. The HDR on the UHD version was a bit disappointing, and wondering if that was the director’s choice. 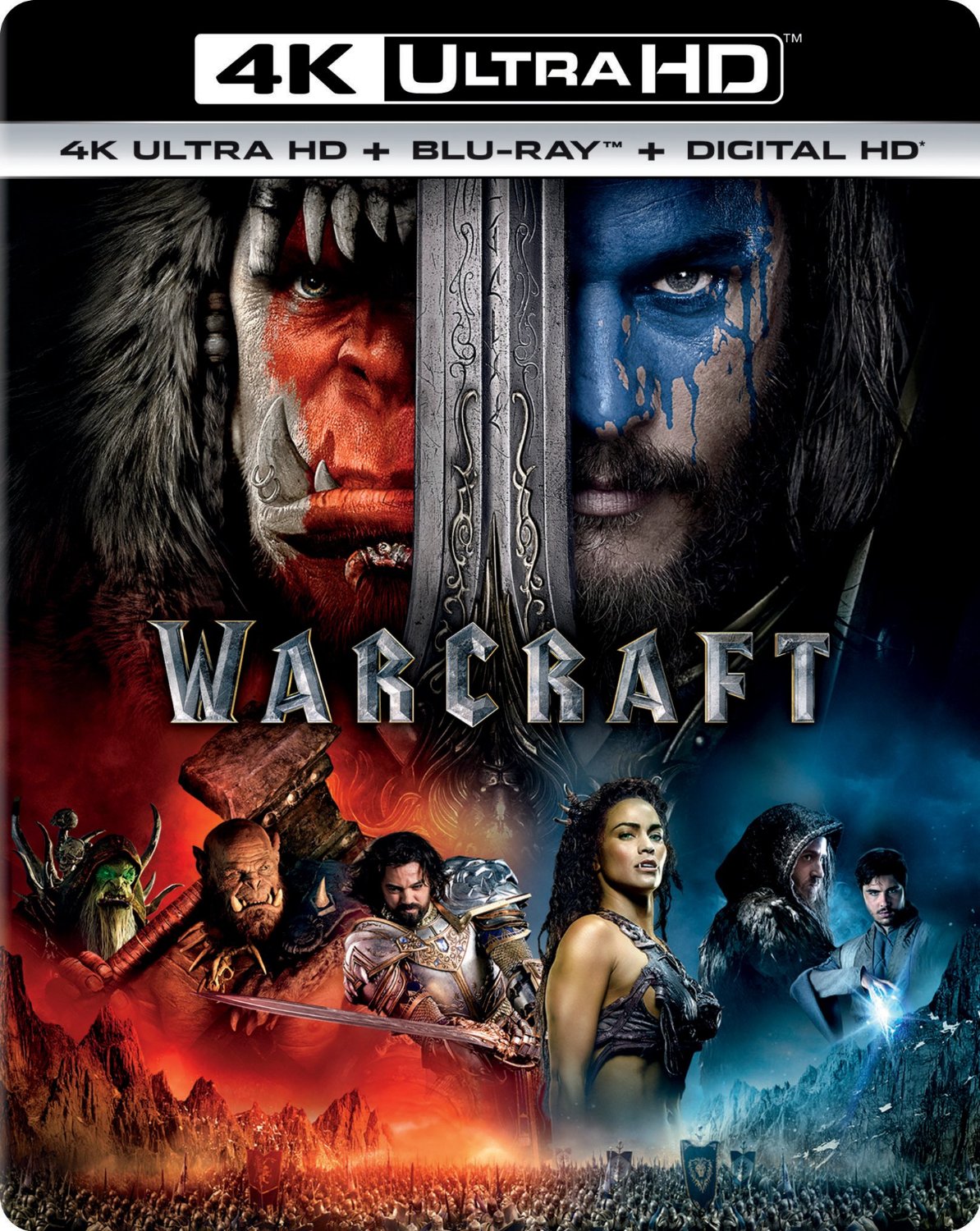