Emotionally complex and filled with a soulful resonance that’s often missing from other action franchises, War for the Planet of the Apes brings the Apes trilogy to a fitting and satisfying end.

Humanity’s survival hangs by a thread in Matt Reeves’ War for the Planet of the Apes, the third outstanding film in the 21st century rebirth of the venerable franchise. Mythic throughout and yet grounded in the dirt and grime of desperate survival, War for the Planet of the Apes provides fascinating characterizations and an engrossing production that allows viewers to experience the scratching and clawing for life that is going on within both sides of this on-going conflict: apes and humankind.

There is still no real truce between man and ape in California. The apes, led by the verbally skillful Caesar (Andy Serkis), are still dug into the depths of the Muir Woods in northern California with sporadic attacks on their forces by a human army headed by the fanatical Colonel McCullough (Woody Harrelson). When the latest human ambush fails, Caesar spares the lives of four soldiers and sends them back to their leader with the promise that the war can end if the Colonel wishes to simply leave them in peace. Instead, he heads an undercover operation that storms the apes’ stronghold killing Caesar’s wife and older son. Enraged, Caesar vows revenge and goes on the hunt for the Colonel hearing that his forces are expected to be joined by a northern army so they can finally outnumber the apes and wipe them out completely. To try to temper their infuriated leader, friends Maurice (Karin Konoval), Rocket (Terry Notary), and Luca (Michael Adamthwaite) go along on the quest hoping to talk sense to Caesar. Along the way they pick up a mute human child (Amiah Miller) not wiped out by the ape virus and an aged creature with his own verbal skills who calls himself Bad Ape (Steve Zahn) who has some knowledge of the stronghold where the humans are camped.

The screenplay by director Matt Reeves and Mark Bombeck is filled with surprises and lots of references to the earlier Apes franchise produced by Fox, but its crux is about survival, not only the survival of the human and ape species but also the survival of Caesar’s moral fiber as he struggles with the twin complications of vengeance and compassion. The movie begins and ends with horrific assaults, all staged and shot with amazing dexterity (the camerawork in the opening battle is truly spectacular as the camera captures the actions from a variety of interesting angles including overhead shots that are pure poetry (only with the unavoidable carnage of war), but all of the action scenes are evocatively produced (the attack inside the apes’ cave comes out of nowhere but is so visually dazzling that it takes the breath away). The film trundles in pacing just a bit once Caesar is captured and is tortured by the Colonel as the moment of final attack draws near, but the beatings and torture have their payoffs eventually making them worth the wait. The character of Bad Ape provides the comic relief of the film, and it’s most welcome with the amount of death and destruction that this third installment must of necessity contain, and the film comes to its conclusion at a point which would make the Fox 1968 Planet of the Apes and the subsequent films in that original franchise possible.

Once again, Andy Serkis’ motion capture performance is a thing of beauty and a real marvel. The special effects artists have aged his Caesar convincingly over the course of the three films, and the now wise and noble leader is also allowed a full range of emotions as he copes with the monstrous slaying of his family while trying to maintain a leadership role with the remaining apes in his colony. Woody Harrelson’s monomaniacal Colonel McCullough never ventures over-the-top into mustache-twirling villainy, and the screenwriters have also allowed him some backstory that helps explain his drive to exterminate the apes. Steve Zahn makes the most out of his comical Bad Ape and is even allowed some offhanded heroics which will further endear him to the audience. Karin Konoval’s Maurice is still the soul of kindness and compassion and develops a real rapport with Amiah Miller’s mute but very active Nova. The only other human character we get to know at all is one of the spared soldiers from early-on, Preacher played by Gabriel Chavarria. He figures importantly in subsequent moments of the movie, but his role might have been broadened a bit to help us understand choices he makes near the end of the film. As in past entries, Terry Notary, Ty Olsson, Michael Adamthwaite, and Toby Kebbell (as the evil Koba whom we’re reintroduced to in some disturbing flashbacks and fever dreams) deliver ingratiating performances as various apes under Caesar’s direction or who have defected from the tribe.

The film’s theatrical 2.40:1 theatrical aspect ratio is faithfully reproduced using the HEVC codec delivering a transfer in 2160p resolution. While the opening forest warfare and the closing sequences across the Sierras offer lush color, most of the film occurs in dark caves or in the bleak white of wintertime which isn’t much conducive to a rainbow of different hues. Sharpness is exemplary throughout, and the judicious use of HDR10 means the whites in the snow scenes dazzle but are completely without blooming while occasional bursts of light from gunfire, explosions, laser beams, and the like jump off the screen while black levels remain inky rich and deep. The movie has been divided into 28 chapters.

The Dolby Atmos sound mix (decoded to the Dolby TrueHD 7.1 core on my equipment) offers the immersive experience one expects from a modern action franchise while also allowing the quiet moments their own kind of grace and nobility. Michael Giacchino’s background score is an unusual one and gains in impact as the film progresses. Atmospheric effects continually punctuate the available screen channels, and the battle scenes will rock the house with thundering bass extensions and split effects across and through the soundstage.

On the UHD disc is:

Audio Commentary: writer-director Matt Reeves delivers another comprehensive commentary track (just as he did with his last Apes extravaganza) going into great detail about the preparations for the production and the enormous challenges they faced realizing his vision.

The commentary is also on the Blu-ray disc along with these additional bonus features:

Deleted Scenes (23:03, HD): ten scenes may be watched separately or in montage.

WETA: Pushing Boundaries (10:36, HD): the special effects house that specializes in the motion capture performances and the big action scenes discuss the aging of Caesar through the films, the picturing of the rain and snow elements in the movie, and the climactic avalanche. Speaking, among others, are Dan Lemmon, Andy Serkis, director Matt Reeves, producer Dylan Clark, and special effects coordinator Mark Gee.

Music for Apes (6:20, HD): director Matt Reeves and composer Michael Giacchino meet up on the last day of scoring the film where the director expresses his admiration for the work Giacchino has done on the movie. They also talk with a percussionist who has worked on all of the Apes films back to the 1968 original.

The Apes Saga: An Homage (7:48, HD): producer Dylan Clark and director Matt Reeves discuss how the new Apes trilogy ties into the original set of films in important ways.

Trailers (6:54, HD): three trailers may be viewed together or separately.

Emotionally complex and filled with a soulful resonance that’s often missing from other action franchises, War for the Planet of the Apes brings the Apes trilogy to a fitting and satisfying end. Also satisfying is the beautiful UHD transfer and Dolby Atmos soundtrack which immerses the viewer both visually and aurally in this majestic and disturbing world. Highly recommended! 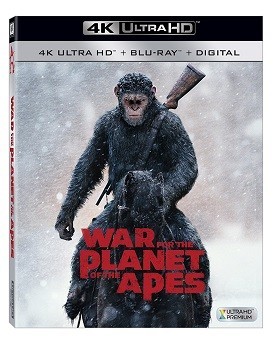