When Hollywood’s take on Leo Tolstoy’s immortal War and Peace debuted in the Soviet Union, it received great box office but also rankled the powers that be. Considering that the novel was part of their country’s pride, they decided to make a film adaptation of their own to not only stand toe to toe with Hollywood, but surpass it. Long available on DVD, Criterion has licensed a recent restoration of the movie for its Blu-ray debut.

Set over the course of seven years leading up to the Napoleonic invasion of Russia, the lives of three Russians play out: Pierre Bezukhov (Sergei Bondarchuk), a noble-hearted intellectual, Prince Andrei Bolkonsky (Vyacheslav Tikhonov), a disillusioned man seeking refuge in the service of the army, and Natasha Rostova (Ludmila Savelyeva), a young countess coming of age. Their trials and relationships form the crux of the story as Napoleon and his forces seek to conquer Russia in his quest to rule the world.

A massive undertaking that took several years, War and Peace is a remarkable achievement that matches epic scope with intimate detail. By using innovative camera techniques, director Sergei Bondarchuk takes us into the high societies of St. Petersburg and Moscow as well as giving us a bird’s eye view of the battles that play out as well. This immaculate attention to detail and scope gives us some of the film’s most memorable sequences, like the Battle of Borodino in Part 3, Natasha’s debutante ball in Part 2, the Battle of Austerlitz in Part 1, and the burning of Moscow in Part 4; however, this exhaustive work didn’t come without a price – Bondarchuk actually died twice during production from heart issues before being revived each time. Despite nearly losing his life in the process, Bondarchuk should be commended for giving world cinema – perhaps – the most definitive film version of Leo Tolstoy’s masterpiece, one which retains epic sweep and spiritualism in its translation from stage to screen, something that had eluded the Hollywood version despite their best efforts.

Not only did he direct the film, but Sergei Bondarchuk also occupied a central role as Pierre Bezhukov; like Henry Fonda, he was older than Tolstoy’s description of the character but he’s closer to the book and more convincing in the role (certainly not a knock on Fonda’s abilities as an actor). For the role of Natasha, Bondarchuk choose ballerina Ludmila Savelyeva for the part; she’s very luminous in the role and comes off as a cross between Audrey Hepburn and Leslie Caron. Vyacheslav Tikhonov embodies the disillusioned Prince Andrei very well; Boris Zakhava makes for a memorable Field Marshal Kutuzov. Other noteworthy appearances include Irina Skobtseva (Bondarchuk’s wife) as Helene Kuragin, Oleg Tabakov, Viktor Stanitsyn,  Kira Golovko, Irina Gubanova and Aleksandr Borisov as members of the Rostov family, Anatoly Ktorov as Count Bolkonsky, and Vladislav Strzhelchik as Napoleon.

Presented in its original four part version, this HD transfer – presented in its original 2:20:1 aspect ratio – was taken from the 2017 restoration performed by Mosfilm of existing film elements. There’s a healthy dose of organic film grain as well as a fairly strong color palette with fine details rendered faithfully. There are some instances in which scenes appear softer that others, but given the fact that the original 70mm elements were not available, it’s still not too distracting; other than that, there some instances of scratches as well as some dirt and dust, but again, not a whole lot and not too distracting. Overall, this is a substantial improvement over previous home video versions and likely the best the film will ever look on home video.

The film’s original stereo soundtrack is presented on a 5.1 DTS-HD Master Audio track for this release, restored from the original 6-track elements. Dialogue is both strong and clear along with the sound effects; the music score also has great fidelity and direction given as well. Instances of crackling, popping, or hissing are very few and far in between, which makes this likely the best the movie will ever sound on home video.

War and Peace – 1966 Documentary (48:36) – This Polish documentary takes us behind the scenes during the filming of the movie.

Interview with Anatoly Petritsky (14:19) – The lead cinematographer talks about some of the innovative camera techniques and the challenges involved in this brand new interview.

Interview with Fedor Bondarchuk (6:41) – The director’s son talks about his father’s work on the movie – including his near death experiences – in this brief new interview.

Les Sovietiques (27:19) – This 1968 French TV program profiles actress Ludmila Savelyeva as well as show her at work with the director in dubbing dialogue for one scene of the movie in post-production.

Cold War Classic (46:44) – Film scholar Denise J. Youngblood talks about some of the influences as well as the historical context of the movie in this brand new program.

Making War and Peace (30:52) – This 1969 documentary, commissioned by Mosfilm, follows the movie from production to release.

Understandably revered and praised in both its home country and all over the world, Sergei Bondarchuk’s War and Peace may just be the definitive film adaptation of the classic Leo Tolstoy novel. Criterion has given the film its proper due on home video with solid marks in both audio and visual quality with a healthy dose of special features related to the film. Highly recommended.

Saw the Blu-ray a month ago and despite some slow parts I liked the film and made me think of The Leopard and Abel Gance's Napoleon. Nice extras on the disc too.

One of the first titles I streamed on The Criterion Channel.

I thought I was going to turn it off in the first 20 minutes. I really struggled to finish watching this film...

...however, once things started progressing, I found myself engrossed in this wonderful, epic film.

I absolutely loved this!

Most striking, beyond the triumphant battle scenes, was the transfer. Just gorgeous to watch! Loved the cinematography in the big ballroom scenes with the camera swooping around the dance floor.

This is just one of those films you have to watch once in your lifetime.
Expand signature
Ronald J Epstein
Home Theater Forum co-owner

This was a movie that I had often heard about but never saw up until I had the chance to review it. I had to break up the film into four parts over four days but the end result was worth it entirely; no regrets whatsoever. It's definitely a film one should see at least once in their lifetime.
Expand signature
"I don't expect anything from you, except to die and be a very cheap funeral. You're gonna die now!"
Reactions: PMF

Ronald Epstein said:
One of the first titles I streamed on The Criterion Channel.

I thought I was going to turn it off in the first 20 minutes. I really struggled to finish watching this film...

...however, once things started progressing, I found myself engrossed in this wonderful, epic film.

I absolutely loved this!

Most striking, beyond the triumphant battle scenes, was the transfer. Just gorgeous to watch! Loved the cinematography in the big ballroom scenes with the camera swooping around the dance floor.

This is just one of those films you have to watch once in your lifetime.
Click to expand...

Wow. I would have sworn on a stack of bibles that you wouldn't have had the patience for this, but you've redeemed yourself, Ron! We'll make an avant-garde cinephile of you yet.
I know RAH has stated that this transfer is unrepresentative of the original 70mm elements, but I thought the Criterion Blu-ray was gorgeous to look at.

Gorgeous, - yes. But still in no way replicating the 70mm presentation. Nothing ever can. A shame. But hey, Criterion deserves props for this one - a monumental undertaking, given its due in hi-def. If not perfect, then most certainly 'beyond' watchable. An epic in every sense - mesmerizing in its execution and performances. Wow, doesn't begin to describe Bondarchuk's War and Peace.
Reactions: PMF
M

Still one of my favorites this many years later!
Reactions: PMF

I've wanted to see this for years, but I have no interest in watching a film of this length sloppily converted from PAL and in pan and scan (as the available US editions presented it). The Criterion Blu-ray is fantastic, though with the caveats mentioned by others. Don't expect anything resembling Lawrence of Arabia, 2001, or The Sound of Music. Mosfilm clearly put a lot of work into making this presentable. One of the interviews on the disc reveals that even during shooting there were problems with the sub-par Soviet 65mm stock (Bondarchuk wanted to use imported Kodak stock).

As for the film, it's one of the best "new to me" films I've seen this year. I watched it over two nights. Even for all the epic scale, you don't lose sight of the characters. I think it was also clever of Bondarchuk to play Pierre because the character does work as sort of a surrogate for the audience and who better than the director to guide viewers? The cinematography is breathtaking, between all the mind-blowing camera movement and even surrealistic editing that you'd rarely see in a film of this scale.
G 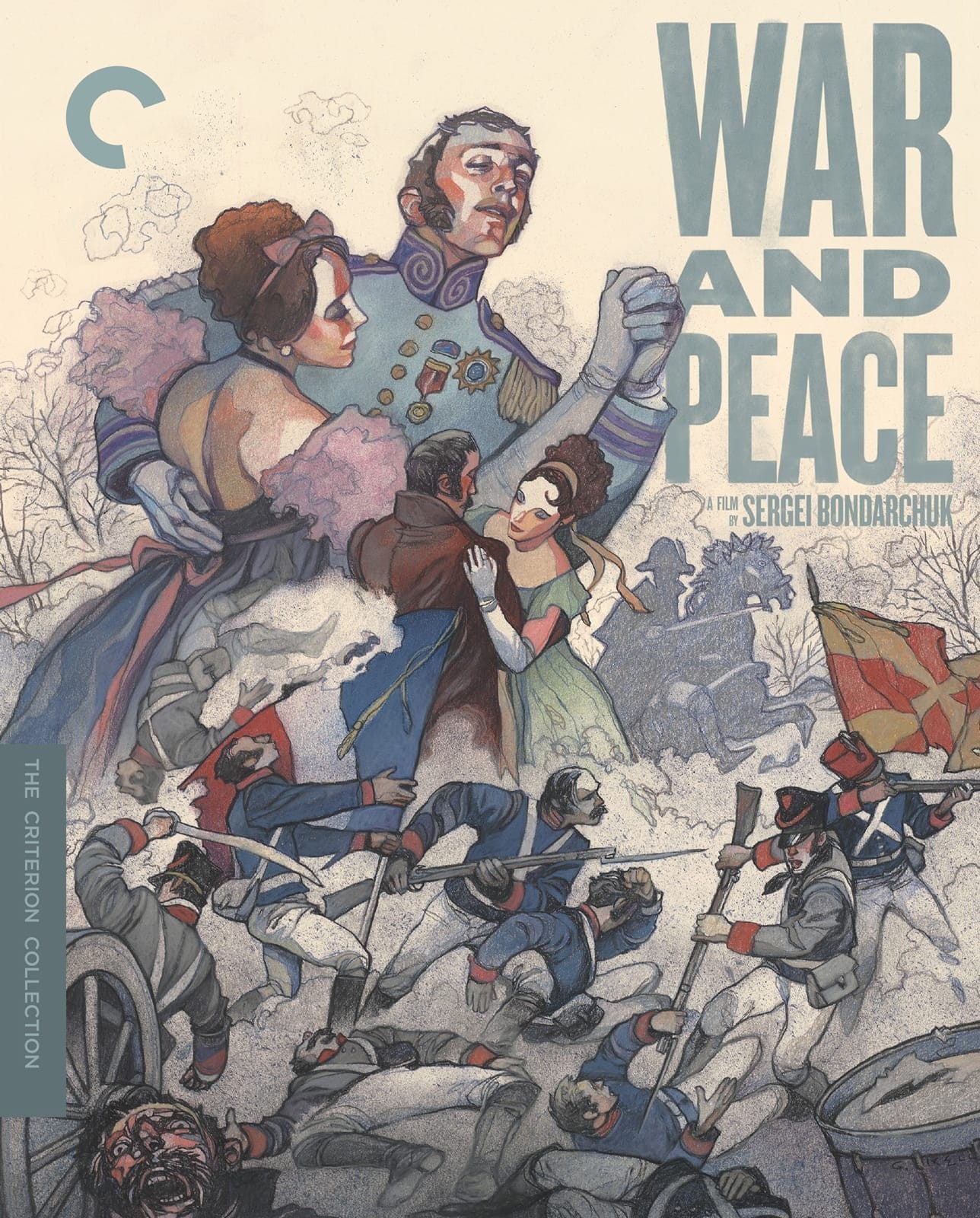