He Walked by Night brings a slightly modified true crime story to the screen with a mesmerizing lead performance and action so fascinatingly taut and realistically mounted that it’s impossible not to get caught up in the action from its first violent act until its last inevitable gunshot.

Another stunning docudrama film noir from Eagle-Lion studios produced in the late 1940s and received with excitement by critics and public, He Walked by Night brings a slightly modified true crime story to the screen with a mesmerizing lead performance and action so fascinatingly taut and realistically mounted that it’s impossible not to get caught up in the action from its first violent act until its last inevitable gunshot. This Classic Flix Blu-ray brings another pristine noir transfer to a welcome public with enough bonus material to make the package a must buy for film aficionados.

Electronics expert Roy Morgan (Richard Basehart) steals parts from various radio and electronics shops around Los Angeles in order to fashion his more sophisticated and elaborate technological inventions which he can rent out for top dollar. But when he’s almost caught breaking into a shop by a passing policeman, he shoots and kills the off duty officer and thus becomes a wanted man hunted unmercifully by Captain Breen (Roy Roberts) and his two best homicide detectives Marty Brennan (Scott Brady) and Chuck Jones (James Cardwell). But Morgan is a very cool customer always remaining a step in front of the law due to his scanning of the police band to always know the progression of the case against him. It takes the combined efforts of all of the various police precincts in Los Angeles and sterling work by forensics expert Lee Whitey (Jack Webb) for the police to have a chance of apprehending this dangerous criminal.

The script by John C. Higgins, Crane Wilbur, and Harry Essex rings true from first moment to last, utilizing the monotone narration by Reed Hadley and portraying the Los Angeles area in all its varying environs and population. Scenes jump back and forth between the police doing their jobs and Morgan making elaborate preparations to first distract the police (by engaging in a series of liquor store robberies in various disguises) and then to map out escape routes should his true identity ever be traced to his current address. Alfred Werker directs most of the film in a very orthodox style aided immeasurably by the supremely talented cinematographer John Alton whose set-ups feature low-key lighting and chiaroscuro shadow effects that heighten the film’s ambiance of danger and unease constantly. But even the well-lit scenes can make one sit up and take notice or squirm unmercifully. A group effort to come up with a sketch of the killer is fascinating to see come together, and a later sequence where Morgan probes into his body for a bullet and then removes it is almost unbearable to watch even though the camera rarely leaves the face of the criminal enduring the agony of his own self-surgery in order to extract the projectile. It’s sequences like these and the film’s pièce de résistance, the climactic pursuit of the killer through the underground tunnels of Los Angeles (allegedly directed by Anthony Mann and preceding by a year the similarly filmed climax for The Third Man) that lifts this excellent crime drama into another league, a first-rate police procedural that never telegraphs for an instant where it’s going or what will happen.

Richard Basehart is absolutely magnetic as the seldom speaking Roy Morgan. Cagey and physically and mentally adept, Basehart’s Morgan wears of smirk of self-satisfaction through most of the movie, and yet when the dragnet begins to tighten, his sneer turns to the snarl of a caged tiger waiting to pounce and slowly begins showing the fear of imminent capture in the elaborate and extended tunnel sequence. Much more straightforward and direct performances are offered by Scott Brady and James Cardwell as the two police sergeants on the case, Brady always in search of a match for his cigarette and Cardwell the ever-supportive partner even when things go against him midway through the film. Roy Roberts lends another of his stalwart supporting performances as the even-tempered police captain determined to get his man. Jack Webb is very effective in several scenes as the brilliant forensics expert whose knowledge of explosives and ballistics are vital in cracking the case. (Webb would take his experiences in this film with the film’s technical advisor Marty Wynn to craft Dragnet a few years later.) Whit Bissell has some strong scenes as a frightened shop owner hoodwinked by Morgan and who later serves as a lure for the police to capture him. Among the other famous faces on display for a scene or two during the movie are Frank Cady, Jack Bailey, John Dehner, Tommy Kelly, and Byron Foulger.

The film’s original theatrical aspect ratio of 1.37:1 is faithfully represented in this 1080p transfer using the AVC codec. Apart from some very slight line twitter, this is another masterful restoration with superb sharpness that relays lots of details in facial features in close-ups and a grayscale that’s second to none, very important in a film that plays so much with light and shadow as this one does. It’s also clean as a whistle with not a trace of dirt or debris. The film has been divided into 19 chapters.

The DTS-HD Master Audio 2.0 mono sound mix is solid as a rock with dialogue beautifully rendered and mixed with surety with galvanizing atmospheric effects (gunshots, running water, echoes in the underground tunnels) and Leonid Raab’s very spare score which rarely reveals itself in a film that’s mostly played out without music. There are no age-related problems with hiss, crackle, or flutter.

Audio Commentary: a delight from beginning to end featuring two of the most learned film historians working today: Alan K. Rode and Julie Kirgo. Filled with knowledge on many of the members of the film’s cast and the varying locations around Los Angeles where certain scenes were filmed, this commentary track is a must listen.

Below the Surface: He Walked by Night (11:47, HD): excellent critical summary of the film’s great strengths with contributions by, among others, historians Alan Rode, Julie Kirgo, Courtney Joyner, Todd McCarthy and cinematographer Richard Crudo

Art Gallery: twenty-four stills and poster art from around the world which can be advanced manually or automatically.

Twenty-four Page Booklet: filled with interesting stills and posters along with a comprehensive essay on the film and its legacy by critic Max Alvarez.

Another winner from Classic Flix who is rapidly making a name for itself with these brilliant Blu-ray restorations of classic films noir, He Walked by Night is a release not-to-be-missed. Its compelling crime story and devastating central performance enhanced by moody direction and stupendous camerawork make it a classic of its kind. Highly recommended! 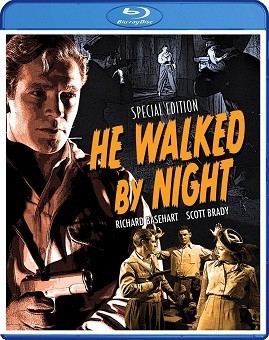