The Vietnam War, a brilliant new documentary by Ken Burns and Lynn Novick, comes to Blu-ray from PBS.

There is no single truth in war.

I never set foot in Vietnam, but I spent four hours in Danang harbor on October 7, 1970. I was a Communications Yeoman aboard the aircraft carrier USS Bon Homme Richard, where my job was to ensure that the ship’s incoming and outgoing messages – many of which were Top Secret and Secret – were prepared accurately and were delivered to their intended recipients in a timely fashion . I had been aboard the ship since February, 1969 and was completing my second tour of duty in the Gulf of Tonkin and South China Sea. During that time the ship had never previously gotten close enough to the coast of Vietnam to see land. The visit to Danang was intended in part to demonstrate that the Vietnamization of the area had succeeded to the point where the United States was willing to risk exposing one of its most important warships, albeit for only a few hours.

An hour or so after the ship dropped anchor I took a few minutes to walk out onto the catwalk and take a look around. What I remember most is that the land adjacent to the harbor was densely green. I had some free time but I decided not to linger; it was possible that there were Viet Cong snipers in the hills and my four-year enlistment was up in fewer than 90 days. I had never been shot at and this, I felt, was no time to begin. We departed Danang at 1300 hours (1:00 p.m.) and within 48 hours the ship had resumed its usual air operations.

I mention this because although I am a Vietnam veteran, my tour of duty bore little resemblance to the harrowing experiences of the Marines and soldiers depicted in The Vietnam War, the monumental history by Ken Burns and Lynn Novick. Available statistics tell us that approximately 2,594,000 American military personnel served within the boundaries of South Vietnam between January 1, 1965 and March 28, 1973. Another 514,300 people, mostly sailors like me, served aboard ships in the South China Sea and the Gulf of Tonkin. Some 294,800 were stationed in Laos, Cambodia, or Thailand. Altogether those Marines, soldiers, sailors, airmen, and nurses made up about 39% of the active duty military who served worldwide during the Vietnam War. The documentary focuses primarily on the Marines and soldiers, appropriately so because they comprised the vast majority of those who were killed and wounded during the war.

Ken Burns and Lynn Novick begin the documentary with a recounting of the colonization by France in the 19th century of what was then known as Indo-China. Vietnam was occupied by Japan during World War II, during which time resistance to Japan was made by the Viet Minh (with American support) by Ho Chi Minh. When the war ended France wanted to reclaim its colony. The United States under Franklin D. Roosevelt was opposed to the continuation of French colonization, but after his death President Truman was reluctant to get involved, and by the end of September, 1945 the French had re-established control of the country. The following year the First Indochina War began, with Ho Chi Minh and his insurgents fighting to get the French out of the country. The war dragged on for more than seven years, until the critical siege of Dien Bien Phu in northwest Vietnam. In 1953 the French army decided to establish a large base in a valley there, to be manned by 20,000 soldiers who would be supported with artillery and resupplied by air. The French had grown weary of fighting a guerilla war and hoped to draw the Vietnamese into a decisive battle.

What the French did not count on is that in 1954 the Vietnamese, under the leadership of General  Vo Nguyen Giap, succeeded in using soldiers and civilians to laboriously drag heavy artillery into protected positions in the mountains surrounding Dien Bien Phu. From there the Vietnamese were able to shell the French base with impunity, eventually rendering the airstrip virtually unusable and forcing the French to parachute supplies into the base. Vietnamese soldiers made repeated assaults against the base, undeterred by the fact that they were suffering more casualties than the French. Eventually the base was overrun and the French surrendered, effectively ending the war. It was a decisive victory for Ho Chi Minh, even though Vietnamese casualties probably doubled those of the French.

A peace accord in Geneva stipulated that Vietnam would be temporarily divided at the 17th parallel until a unification election was to be held in 1956. However, when it became apparent that Ho Chi Minh would win the election the president of South Vietnam, Ngo Dinh Diem, refuse to allow the election to take place. The United States, convinced that Ho Chi Minh had come under the influence of the Soviet Union and Red China, supported Diem. North Vietnam, aided by guerillas in the south that became known as the Viet Cong, began preparing for war. The United States provided military aid and advisers to help South Vietnam.

It is important to understand the French experience in Vietnam because the United States did not seem to learn from it and repeated many of the mistakes made by the French. The documentary covers in detail America’s involvement in Vietnam in mostly chronological order, starting with baby steps during the Eisenhower Administration to the ultimate collapse of South Vietnam during the Ford Administration. When all was said and done, more than 58,000 Americans had lost their lives.

The Vietnam War is divided into ten episodes, spread out over ten Blu-ray discs. They are titled as follows:

With the benefit of new materials which have been released in the 44 years that have elapsed since the United States pulled out of Vietnam, and in particular recorded conversations involving Presidents Kennedy, Johnson, and Nixon, The Vietnam War shows how all three presidents were doubtful that a military victory was possible, but they pressed on largely because of political considerations. Each episode intersperses the recollections of American veterans, South Vietnamese veterans, North Vietnamese veterans, and Viet Cong veterans, both officers and enlisted, something which no prior documentary about the war was able to provide. Combat footage chillingly depicts the horrors of war and the incredible bravery shown by those who fought.

The United States – and in particular Robert McNamara, President Johnson’s Secretary of Defense, and General William Westmoreland – believed that inflicting heavy damage on the enemy would eventually force them to the negotiating table. In that respect the lessons of the French were seemingly forgotten, because North Vietnam had demonstrated a near infinite willingness to sustain casualties and keep fighting. Expanding the war, such as mining North Vietnam harbors or even invading the North, was seen as too risky because it might have drawn the Soviet Union or China into the conflict.

Considerable attention is devoted to the domestic situation in the United States. In the mid-sixties most Americans supported the war, but that support began to erode as the fighting dragged on with no end in sight. At the time males who were 18 years or older were subject to being drafted into the military, unless they were able to qualify for deferments that were available to students, married men, those in certain occupations, etc. Pacifists could apply for conscientious objector status, but getting approved was difficult. Anti-war protests began to proliferate, creating deep divisions in the country. In 1968 Martin Luther King and Robert Kennedy were assassinated and Lyndon Johnson declined to run for re-election. On the eve of the presidential election Richard Nixon cynically encouraged South Vietnam to not participate in peace talks, promising that they would get a better deal if he were elected. Those were tumultuous times.

The war in Vietnam has been the subject of scores of books and movies, and no documentary – even one with a running time of 18 hours – could cover it completely. The Navy and Air Force are mentioned only in passing, and The Vietnam War does not attempt to resolve the question of whether the war could have been won by the United States if it had been fought differently. It is about what did happen, not what might have happened.

The result is an outstanding documentary that is compelling, infuriating, inspiring, disturbing, and heartbreaking. Much of the combat footage is very graphic, and some truly horrific events are depicted. The script, by historian Geoffrey C. Ward, wisely avoids the clichés about psychotic Vietnam veterans which proliferated during the post-war years. The vast majority of Vietnam veterans are well-adjusted, highly productive, and proud of their service. Whatever your thoughts about the war are, The Vietnam War is essential viewing.

The 1080p image is encoded with the AVC codec and is outstanding. It is framed at 1.78:1 with incredible sharpness and clarity, although of course some of the vintage footage shows its age. Viewers who are familiar with Ken Burns’ projects know what to expect, namely a mixture of film and historic still photographs.

The audio may be even better than the video. Depending upon your preference, you can listen in English DTS HD-MA 5.1 or English DTS HD-MA 2.0 stereo. The documentary is beautifully narrated by Peter Coyote, and his words are augmented by more than 100 pieces of music by icons of the era such as The Beatles, The Rolling Stones, and Bob Dylan. Original music with an Asian flair is provided by the Silk Road Ensemble, featuring Yo-Yo Ma. The combat scenes will give your subwoofer a workout. There is a Spanish audio track and optional subtitles in English and Spanish. There also is an English descriptive audio track for the sight-impaired which is in DTS HD-MA 2.0 stereo.

The extras on this Blu-ray set include “The Making of The Vietnam War” (on Disc One) and a number of segments which are not included in the documentary. Those segments are on Disc One and Disc Ten.

The only problem that I had with this Blu-ray set is that the discs are slow to load on my Panasonic Blu-ray player. It takes about 90 seconds for the FBI warning to appear. However, other Blu-ray players may handle the discs differently. Once loaded, the discs performed flawlessly.

That caveat aside, this is truly a remarkable Blu-ray set which is highly, highly recommended

IMO, the best Ken Burn's documentary.
Expand signature
Crawdaddy's favorite "The Mandalorian" Quotes: "This is the Way" and "I have Spoken"

I realize I’m a year or so late to this discussion, but OH MY GOD! Finally made time to watch the documentary, and my wife and I are blown away. I’ve studied a lot about Vietnam and the surrounding era in college and post-grad, so I know the subject very well, and this show hits every note. It’s really stunning filmmaking.

I’ll be making sure my kids watch this (and Eyes on the Prize) as they study that period of history.

Ken Burns has done some great documentaries, but I agree with @Robert Crawford that this is his best work. At some point, I need to pick up the BD set -- I watched the series originally when it aired on PBS.
Expand signature
My DVD Collection 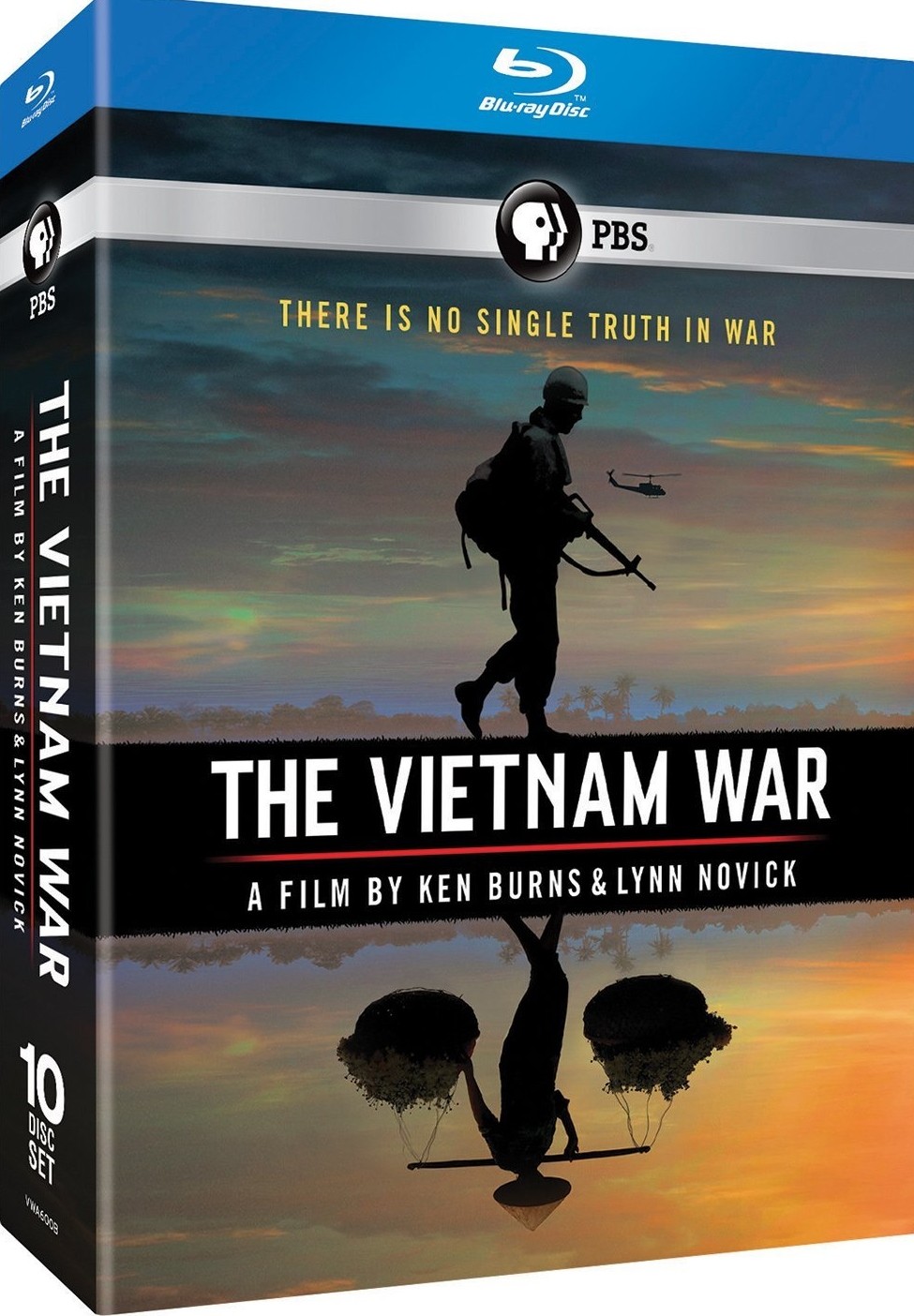