Victoria & Abdul is a delightfully executed biographical portrait of two individuals whose mutual admiration brought them both pleasure and pain.

Judi Dench dons queenly robes once again for Stephen Frears’ beguiling historical comedy-drama Victoria & Abdul. Based on a lesser known incident during the latter years of Queen Victoria’s reign, Victoria & Abdul offers a delicate depiction of the blossoming friendship between queen and commoner but soft pedals the obvious racism and bigotry at the heart of the central conflicts of the movie. Still, despite the gingerly handling of such disruptive and disturbing emotions, the core relationship is an interesting and enticing one that charms and delights for most of its journey.

Chosen to present a ceremonial coin molded in her honor for Queen Victoria’s (Judi Dench) Golden Jubilee, Abdul Karim (Ali Fazal) along with fellow Muslim Mohammed (Adeel Akhtar) arrives in England for the first time and doesn’t quite know what to make of the place. The handsome young clerk is surprised to find favor with the queen herself who is fascinated to learn much about the country that she has never visited though she herself is by title its Empress. As Victoria enjoys more and more the company of Abdul freeing her from a several decades’ long loneliness, the two forge an unlikely and devoted alliance that results in increasing suspicion, jealousy, and outrage from her oldest son Bertie (Eddie Izzard), head of household Sir Henry Ponsonby (Tim Pigott-Smith), Britain’s Prime Minister Lord Salisbury (Michael Gambon), and the Queen’s personal doctor (Paul Higgins), all of whom plot numerous ways to rid England of this outsider.

Lee Hall based his screenplay on the Shrabani Basu book Victoria & Abdul: The True Story of the Queen’s Closest Confidant, written after Abdul’s personal diaries were discovered in 2010. Hall has eased up on the obvious prejudicial underpinnings of the Queen’s household’s objections to Abdul’s growing importance to her (he’s called “the brown Mr. Brown,” a reference to Victoria’s other late-in-life devoted dalliance after the death of her beloved husband, filmed some time ago with Dench also playing Victoria) but focused instead on the Queen’s charmed reaction to someone’s kindness and devotion, not for any personal gain but simply as an act of human kindness. From his first descriptions to her about carpet making through teaching her writing and reading the Indian Urdu language, Abdul is a dedicated subject, so much so that Victoria deems him “munshi” (teacher), a title that burns in the craw of all of the aristocratic lords and ladies who serve her. The narrative then splits its time between the relationship between the devoted friends and the machinations of the scheming inner circle who try numerous ways to poison the Queen’s mind against Abdul. Various secrets are revealed: a wife, his humble station at home and lack of formal education, a severe case of gonorrhea, but nothing seems able to break their bond as settings move around England, Scotland, and Florence (where a sequence with operatic composer Puccini  – Simon Callow – attempting to sing an excerpt from his latest opera leads to Victoria performing “I’m Called Little Buttercup” brings down the house), all guided peerlessly by the smooth hand of director Stephen Frears who has a deft way of handling otherwise conflict-laden biographical period pieces (Prick Up Your Ears, The Queen, Florence Foster Jenkins) and making them palatable for most audiences.

As she likewise demonstrated so impressively in Mrs. Brown, Judi Dench can capture both the imperiousness and the vulnerability of Queen Victoria, and she’s a marvel here etching the Queen’s early melancholy and the last blossoming of a vigorousness to explore life that Abdul brought to her. Ali Fazal is a charming Abdul, a soft spoken, obedient subject who admires the Queen and wishes only the best for her. As entertaining as they all are in their furious envy and prejudicial haughtiness, the members of the Queen’s household don’t emerge from the film representing humanity at its finest though the performances are solid if a trifle one-note (likely as written): Eddie Izzard, Tim Pigott-Smith, Paul Higgins, and Michael Gambon all portray their real-life counterparts as the egotistical, entitled stuffed shirts who continually get their comeuppance numerous times in the movie. Adeel Akhtar is delightful as the other Indian subject Mohammed who longs for the warmth and security of home and has a terrific scene when he recoils from spying on his friend so the British aristocrats can oust them from the palace.

The film’s original theatrical aspect ratio of 2.40:1 is faithfully rendered in this 1080p transfer using the AVC codec. Sharpness is excellent as facial features and hair take on realistic textures. Color is likewise strong and well balanced with believable skin tones. Contrast has been admirably applied for a consistently outstanding image. Black levels are fine. The movie has been divided into 20 chapters.

The DTS-HD Master Audio 5.1 sound mix offers a strong, effective presence. Dialogue has been well recorded and has been placed in the center channel. Thomas Newman’s background score gets the full surround treatment as it swirls through the fronts and rears. Atmospheric effects might have been more numerous and sustained, particularly in the India sequences, but that’s a small nitpick.

The Look of Victoria & Abdul (6:46, HD): director Stephen Frears, producers Beeban Kidron and Tracey Seaward, writer Lee Hall, costume designer Consolata Boyle, and others discuss the intricacies of making a period movie which shot on the real locations used in the film.

Victoria & Abdul is a delightfully executed biographical portrait of two individuals whose mutual admiration brought them both pleasure and pain. The writing may not delve deeply enough into the underlying racial prejudices which are obviously present in the story being told, but the two title characters are so captivating that it really doesn’t matter. Recommended! 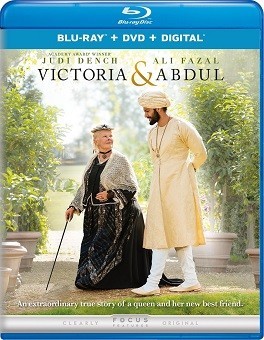