Forum List What's new Dark Style Change width
Log in Register
What's new Search
Menu
Log in
Register
Navigation
Install the app
More options
Dark Style
Close Menu
Posted on October 25, 2019 by Matt Hough
You are using an out of date browser. It may not display this or other websites correctly.
You should upgrade or use an alternative browser.
Good but not great return of the plucky detective 3.5 Stars

The cult of Veronica Mars is alive and well, well, as well as can be expected after the shocking climactic events in the eighth of eight new episodes produced for Hulu and now available on DVD and Blu-ray.

The cult of Veronica Mars is alive and well, well, as well as can be expected after the shocking climactic events in the eighth of eight new episodes produced for Hulu and now available on DVD and Blu-ray. Long a beloved neo-noir mystery series featuring a plucky female detective that ran for three seasons on UPN and the CW and then has been kept alive by a fan-funded 2014 movie and a couple of young adult novels, this new series gives fans much of what they craved about the original show but also comes up a bit short in some areas. Overall, the central mystery is above average, and it’s great to see the old gang (mostly) back together again, but shortcuts with characterizations are taken too often, the series relying on our familiarity with past narratives to provide the necessary backstory, and it’s hard to imagine many people, even the most diehard fans called “Marshmallows,” are going to be satisfied with that very controversial ending creator Rob Thomas has chosen to concoct.

It’s annual Spring Break time in Neptune, California, and the city is jammed to the gills with tourists of all social strata. A local second-rate motel, however, is rocked by a bomb blast killing four people and initiating a series of on-coming explosions over the next several days. Congressman Daniel Maloof (Mido Hamada) hires Mars Investigations to investigate these attacks since it’s obvious that stubborn local police chief Marcia Langdon (Dawnn Lewis) is in way over her head. Keith Mars (Enrico Colantoni) and his daughter Veronica (Kristen Bell) rise to the occasion as always but not without putting themselves and their loved ones and colleagues in grave danger.

As plotted by creator Rob Thomas and co-writer/producer Diane Ruggiero-Wright, the narrative takes twists and turns during the investigation dealing with insufferably arrogant ex-con real estate mogul Richard “Big Dick” Casablancas (David Starzyk), Big Dick’s enigmatic Man Friday and Fixer Clyde (J.K. Simmons), a pair of menacing hitmen (including Clifton Collins Jr., Frank Gallegos) up from Mexico after a cartel leader’s nephew becomes one of the bomb victims, sassy bar owner Nicole (Kirby Howell-Baptiste) who befriends Veronica, a teen detective-in-training Matty (Izabela Vidovic) who reminds Veronica of herself, and Penn Epner (Patton Oswalt), a pizza delivery guy and true crime fanatic who with his group the Murder Heads takes it upon themselves to find the bomber after Epner is injured in the initial blast. These characters become the focus of the season’s eight episodes relegating many of the familiar Veronica Mars family to cameos. Veronica and her father are, of course, front and center, and Veronica’s boy friend Logan Echolls (Jason Dohring) pops in and out of the story as his Navy pilot duties allow (and is given by creator Rob Thomas a James Bond-style sea emergence in a baby blue trunks a la Daniel Craig that deserves notice). But the steady stream of other favorites including Wallace (Percy Daggs III), Weevil (Francis Capra), Dick (Ryan Hansen), Leo (Max Greenfield), Vinnie Van Lowe (Ken Marino), and Cliff McCormack (Daran Norris) get screen time without often being too embroiled in the case at hand, Leo, now part of the FBI, notwithstanding.

Fans of the original series may be disappointed that the episodes don’t offer individual episode mysteries in addition to the season-long arc of the bombing investigation. That absence gives the feeling that these extended episodes (all 48 minutes or longer) are padded out and find Veronica and Keith trodding over the same territory and clues multiple times as suspicion shifts from one red herring to another until the real bomber(s) are inevitably sniffed out. Yes, there is some kerfuffle about a missing engagement ring that gets sidetracked until the final episode, and there is drama about Keith’s ongoing medical condition and Veronica’s will-she-or-won’t-she accept Logan’s proposal, but the season doesn’t seem as rich as any of the network seasons, even the highly debated third season which substituted several shorter mystery arcs instead of one long one which occupied each of the first two seasons.

The real gold of the series, of course, is still Kristen Bell as the title character. Spunky, snarky, mistrustful but also uniquely vulnerable, her Veronica may have become a woman (with several sex scenes to prove it in real life and fantasy during the season), but she’s still the loner on the outside looking in for most situations in which she finds herself. Bell’s superb chemistry with Enrico Colantoni as her father, Jason Dohring as her boy friend, Francis Capra as biker gang leader Weevil, and Max Greenfield as former crush Leo all show the actress as irreplaceable in the role. J.K. Simmons keeps us guessing continually as the Fixer, and David Starzyk is as despicably sleazy as “Big Dick” Casablancas as ever. Patton Oswalt, Clifton Collins Jr., and Kirby Howell-Baptiste all make notable contributions to the season.

Here are the eight episodes contained on two DVDs in this season set:

6 – Entering a World of Pain

The episodes are presented in their widescreen television aspect ratio of 1.78;1 and are anamorphically enhanced for widescreen televisions. While sharpness is excellent and color is exactly right, there are traces of aliasing to be seen in tight line structures in several episodes, not a surprise with standard definition transfers. Contrast has been nicely applied, however, and black levels are surprisingly rich and deep.

The Dolby Digital 5.1 surround mix offers very effective sound design. The explosions throughout various episodes are quite powerful and will rock the room. Fire power in the penultimate episode also pings around the room as split surrounds offer a nice, wide soundstage. Dialogue is always clear and has been placed in the center channel. Music also gets routed to the fronts and rears impressively.

The fourth season of Veronica Mars as presented on Hulu and represented in this home video release is not the place to start for newcomers. The identities of all four killers during the show’s three broadcast seasons are revealed at various points during this latest one, so newbies need to start at the beginning. For the rest of us, this new season offers a welcome return of one of our favorite detectives without that fully satisfying feeling that one gets from watching the broadcast seasons where a devious longer mystery is abetted by a series of deliciously clever smaller puzzles.

Strange that they'd send you the DVD to review instead of the Blu-Ray...

Adam Lenhardt said:
Strange that they'd send you the DVD to review instead of the Blu-Ray...
Click to expand...

According to the press release, the Blu-ray is being issued by Warner Archives rather than Warner Home Video, and all of the disc information on the press release I got was strictly about the DVD. It's as if the Blu-ray didn't exist in their universe, and as they are separate divisions within the company, I guess it doesn't.
Last edited: Oct 26, 2019
You must log in or register to reply here. 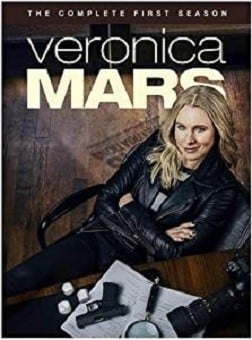