Posted on January 9, 2019 by Todd Erwin
Fun ride and nothing more 4 Stars

After years of development, Sony struck gold at the box office with Venom, creating a fairly standard origin story for the anti-hero that would ultimately become one of Spider-Man’s more popular villains.

A probe from Life Foundation carrying four samples of a symbiotic life form from an asteroid crash lands in Malaysia, releasing one of the symbiotes that takes an ambulance driver as its host, which then begins a journey in an effort to reunite with the other symbiotes. Life Foundation founder and CEO Carlton Drake (Riz Ahmed) wants to use the symbiotes to allow humans to populate other planets, as he believes the world is about to end. Investigative reporter Eddie Brock (Tom Hardy), looking for the next big story, hacks into his fiancée Anne Weying’s (Michelle Williams) computer late ne night, and discovers a possible cover up by Drake, who is settling out of court on a wrongful death case. Eddie confronts Drake during an interview, resulting in both Eddie and Anne getting fired by their employers. But Life Foundation scientist Dr. Dora Skirth (Jenny Slate) is starting to have second thoughts regarding Drake’s plans, and contacts the unemployed Eddie, who accompanies her to the lab, ultimately becoming infected with one of the symbiotes known as Venom. Venom brings out the worst in Eddie, giving him a hunger he cannot satisfy along with superpowers that provide inhuman physical agility and a voice in head dictating his motives.

This is where the movie makes a major tonal change, trying to head into Deadpool territory but remaining PG-13, and where the movie also begins to go off the rails as a CGI extravaganza. There is a car chase though the streets of San Francisco that runs on far too long, and additional action sequences that seem to serve the effects rather than the story. The role of Carlton Drake is not fleshed out enough, nor is he portrayed as particularly dangerous by Riz Ahmed (possibly poor casting?). Director Ruben Fleischer (Zombieland) at least keeps things moving at a breakneck pace and there are some funny interactions between Venom and Eddie, but as the film ended, my initial reaction was “Is that all?” This is before the mid-credits sequence between Eddie and Cletus Kasady (Woody Harrelson) that felt derivative of a similar scene from Suicide Squad.

Sony brings Venom to 4K UHD Blu-ray with a stunning 2160p HEVC encode with both Dolby Vision and HDR10 high dynamic range. Compared to the included Blu-ray edition, the UHD appears much sharper with more defined details, particularly in wider shots such as the vegetation on the hillside where the Life Foundation headquarters are located. Contrast gets a huge boost, with deeper blacks and shadow detail. A perfect example is at the 53:38 mark where Eddie speaks to Venom in a car window reflection – Venom is much easier to make out on the UHD than he is on the Blu-ray, with much more detail to boot. Colors are more natural and contain a wider range of shading – the yellow symbiote at the beginning of chapter four appears to have more colors within its body than on the Blu-ray version. This was all viewed on an HDR10 capable display.

The Dolby Atmos track on the UHD disc is loud, boisterous, and immersive, a nice improvement over the Blu-ray’s DTS-HD Master Audio 5.1 track. Sounds are placed more precisely within the listening space, and there is a greater sense of surround presence as well. Overheads are used quite effectively for Venom’s voice inside Eddie’s head in addition to additional sounds during the action sequences. LFE is robust, likely to give your subwoofer a good workout. Dialogue is clear and well-prioritized throughout.

Venom is the first 4K UHD Blu-ray I’ve come across with a forced trailer (Spider-Man: Into the Spider-Verse) after the disc loads, and in 2160p with HDR.

Spider-Man: Into the Spider-Verse Sneak Peek (2160p; 3:34): This is the same post-credits sequence featured in Venom, and can be accessed as its own featurette on both the UHD and Blu-ray discs.

The remaining special features are exclusive to the included Blu-ray edition of the movie.

The Anti-Hero (1080p; 10:01): A look at the relationship between Eddie and Venom and the history of the production. 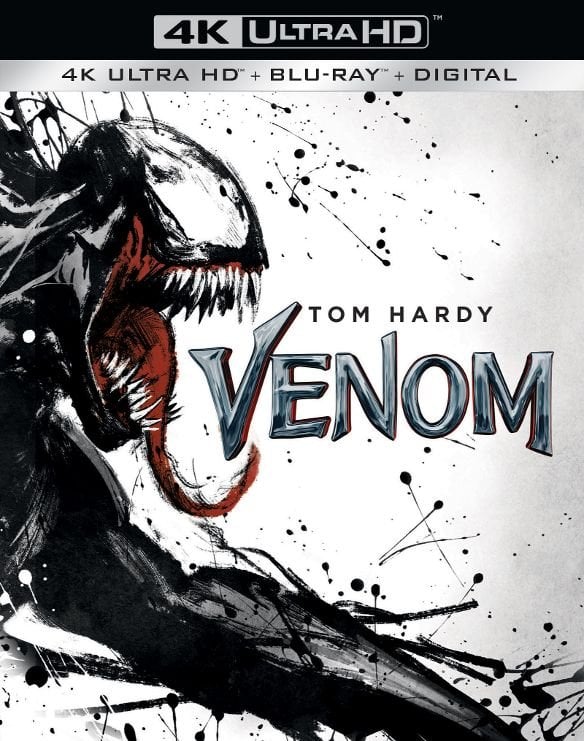