Ti West’s In a Valley of Violence succeeds in spite of itself, a revenge western with just enough atmosphere, action, and clever banter to balance the routinely written and performed cardboard characters, awkward staging and pacing, and simplistic narrative.

Ti West’s In a Valley of Violence succeeds in spite of itself, a revenge western with just enough atmosphere, action, and clever banter to balance the routinely written and performed cardboard characters, awkward staging and pacing, and simplistic narrative. Some talented personnel before and behind the camera haven’t worked up much of a sweat in bringing this fairly predictable if nevertheless entertaining oater to the screen.

A drifter named Paul (Ethan Hawke) arrives in Denton, New Mexico, a dried-up town in more ways than one, with his trusty collie Abbie (Jumpy) by his side on his way to Mexico and hopefully a new start in life. But he’s accosted by the bombastic town bully Gilly Martin (James Ransone) who underestimates Paul’s inner turmoil and simmering rage. When Paul levels Gilly with a single punch, the bully’s bruised ego won’t tolerate his father Marshal Martin’s (John Travolta) order to leave the stranger alone. Gilly and his buddies Tubby (Tommy Nohilly), Harris (Toby Huss), and Roy (Larry Fessenden) ambush the stranger outside of town, kill his dog, and throw Paul down a rocky cliff assuming he’s dead. But the grizzled Paul is tougher than even they estimate, and he returns to Denton with vengeance on his mind.

Writer-director Ti West has captured the core of a good story with his spaghetti western offshoot, but he fails to explore the psyches of his major characters, all of whom seem to have more to them than meets the eye. (Tubby’s confession late in the film reveals depths of his personality that were never explored, and even Paul’s admission of a living wife and child back East to hotel proprietress Mary-Anne (Taissa Farmiga) suggests a very interesting backstory that is shrugged off and untapped by the scenarist.) Director West also errs in punctuating the second half of the film’s revenge scenario with far more talk than is necessary. Despite some biting lines full of droll admissions and a sprinkling of wit, sounding off at length when one is trying to gain a tactical advantage for ambush and to prevent his own murder is just plain dumb, and West makes the same mistake two or three times. The audience is expecting that each of the guilty parties will be somehow taken by surprise and killed in a unique way they aren’t expecting, and the first two deaths go that way (the second one filmed in part from a high angle shows the director’s élan in staging and shooting), but the other deaths are telegraphed too much and, as said earlier, drag out with too much talk. The New Mexico locations are perfect for telling the story, and the dirt and smell of the era comes across quite nicely.

Ethan Hawke’s Paul is a man of few words except in talking to his ideal screen partner with whom there is much chemistry: no, not Taissa Farmiga as sixteen-year old Mary-Anne who does fine in the thankless role of unwanted helpmate who (of course) saves the day. No, Hawke’s wonderful relationship with on-screen co-star Jumpy playing his dog Abbie is one for the ages. Jumpy is one of the most charismatic and endearing movie pooches seen in quite some time, so Abbie’s vicious murder midway through the film is as shocking to the audience as it is to the owner, and it’s an absence felt deeply for the rest of the film. John Travolta doesn’t have quite enough of the steely, threatening presence as the town marshal whose word is law (a role made for someone like Brian Dennehy), but he does well enough with the snappy dialogue no matter how misplaced it is at times. James Ransone makes a great bullying, blustering Gilly, the kind of person who’s bravest when backed up by a group of sycophantic followers but whose true colors are shown in his mistreatment of his fiancé Ellen (Karen Gillan worshipful until she realizes what a coward he really is) and his bravery only when he thinks he’s in the driver’s seat. Toby Huss as Harris and Tommy Nohilly as Tubby make decent impressions with very limited amounts of screen time. Burn Gorman has some fun scenes as a drunken trail preacher/charlatan who figures only limitedly into the story.

The film’s 2.40:1 theatrical aspect ratio is faithfully presented in this 1080p transfer using the AVC codec. Filmed rather than digitally recorded, there’s a grit and texture to the images that film offers and which makes for a very impressive and sharp transfer with only an occasional shot a little less than razor-edged. Details with scars, facial blemishes, and dental irregularities are all shown with excellent clarity. Color is nicely controlled but always true with very realistic flesh tones. Contrast has been expertly applied throughout. The movie has been divided into 20 chapters.

The DTS-HD Master Audio 5.1 sound mix doesn’t keep the surrounds fully engaged at all times, but Jeff Grace’s Morricone-inspired western score offers a jaunty and oftentimes exhilarating listening experience. Atmospheric effects are well chosen and applied where necessary while dialogue appears mostly in the center channel with a nice moment right before the ambush where whispered voices are placed in surround channels making for an effective bit of ambiance.

Behind the Scenes of In a Valley of Violence (2:00, HD): star Ethan Hawke describes the plot of the movie with John Travolta performing a monologue to the camera that opens and closes this vignette.

Although in the disc featurette star Ethan Hawke describes In a Valley of Violence as more than a revenge western, it really doesn’t seem to be anything more than that. Whatever depths and complexities were intended for presentation, they didn’t seem to make it into the final film. Nevertheless, what’s here is simplistically entertaining, and the Blu-ray presentation is tops. 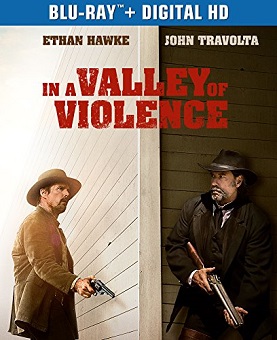