Intriguing but flawed inside look at the Cosa Nostra 3.5 Stars

The Valachi Papers, an intriguing but flawed inside look at the workings of the Cosa Nostra in the United States, arrives on Blu-ray from Twilight Time with a very nice transfer from Sony.

I never hit nobody that never deserved. – Joe Valachi

The Valachi Papers, an intriguing but flawed inside look at the workings of the Cosa Nostra in the United States, arrives on Blu-ray from Twilight Time with a very nice transfer from Sony.

Joe Valachi (Charles Bronson) was a career criminal who, in 1963, testified before the U.S. Senate that the Mafia, aka the Cosa Nostra, did in fact exist and was active in the United States. Reportedly he was the first member of the Mafia in America to break the mob’s “code of silence.”

The Valachi Papers, a mostly true story based upon the best-selling book by Peter Maas, is told in flashbacks. It is 1962 and Joe Valachi is serving a Federal prison sentence for drug trafficking. Another prisoner attempts to knife him while he is showering, and Valachi has become convinced that mob boss Vito Genovese (Lino Ventura), who is incarcerated in the same prison, believes that Valachi is a snitch and has put a price on his head. He agrees to tell what he knows about the Mafia, or Cosa Nostra, in return for being kept in protective custody.

Valachi’s career in crime begins in a gang that specializes in quick hit burglaries. He is given the nickname “Cargo” because of his ability as a getaway driver. Eventually he serves a short prison stretch where he becomes a cellmate of Dominick “Gap” Petrilli (Walter Chiari), a member of the Maranzano crime family. Following his release from prison, Valachi is involved in a botched robbery. After an exciting chase which ends with Valachi’s car in New York’s East River, he meets up with Gap and is introduced to Salvatore Maranzano (Joseph Wiseman). Maranzano is impressed with Valachi and takes him on as a driver for his associate Gaetano Reina (Amedeo Nazzari). Valachi eventually marries Reina’s daughter, Maria (Jill Ireland).

Over the years Valachi is involved in gangland wars and becomes acquainted with notable gangsters such as Lucky Luciano, Albert Anastasia, and the aforementioned Vito Genovese.

The Valachi Papers, directed by Terence Young (Dr. No, From Russia With Love, Wait Until Dark), plays out in episodic fashion, which causes the film to lose momentum from time to time. Charles Bronson is totally believable as Valachi, but Jill Ireland (Bronson’s real-life wife) is given little to do.  Joseph Wisesman and Lino Ventura are excellent as mob bosses, and Walter Chiari give a superb portrayal of Gap. Sharp-eyed viewers will notice some anomalies, such as the scene where Valachi crashes into the East River and the World Trade Center can be seen in the background. In another scene which takes place in the 1930s, Valachi is driving a period automobile in Manhattan while late Sixties and early Seventies vehicles are passing by.

Those problems notwithstanding, The Valachi Papers is a violent and fascinating look at the inner workings of the Cosa Nostra. It also is yet another film which calls into question the judgments of the Motion Picture Association of America, which inexplicably gave it a PG rating when even a single scene of nudity absent the violence would have given it an R. There is one squirm-inducing scene which could lead to awkward questions by youngsters.

The 1080p color image is encoded with the AVC codec and is properly framed at 1.85:1. A Dino De Laurentiis production, The Valachi Papers was filmed mostly in Italy by cinematographer Aldo Tonti (Barabbas, Under Ten Flags). It is a dark film, with much of the action taking place at night, but shadow detail is very good. Black levels are solid and sharpness is excellent throughout. Film grain is intact and the overall effect is very film-like.

Much of the English 1.0 DTS-HD MA mono soundtrack is dubbed due to the large number of Italian actors in the cast. I did not find the dubbing to be a distraction, but I know that it is an issue for some viewers. The dialogue is clear and understandable throughout, and the musical score by Riz Ortolani is presented with excellent fidelity.

The only extra on this Blu-ray disc is the partial isolated music track.

Also is included is a booklet with a typically insightful and informative essay by Julie Kirgo. She reports that Dino De Laurentiis claimed that he moved the production from New York to Rome because of mob threats, which may or may be true.

The Valachi Papers certainly will appeal to fans of the genre, and they will not be disappointed by this fine Blu-ray. It has been released in a limited edition of 3,000 copies, so readers interested in purchasing it should go to the Twilight Time website or the Screen Archives website to confirm that copies are still available. 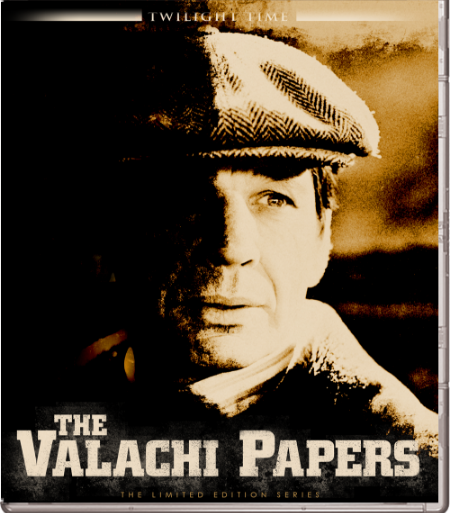