One of the few shining gems of the 2016-2017 television season was NBC’s This Is Us, the story of four generations of an American family as they walk, run, strut, and stumble through life, love, career, birth, and death.

One of the few shining gems of the 2016-2017 television season was NBC’s This Is Us, the story of four generations of an American family as they walk, run, strut, and stumble through life, love, career, birth, and death. It’s a show that blends joyousness and sadness seamlessly capturing the public’s fancy like no other network television series in the past few years with writing that is deep and real and performing that’s as good as it gets. It’s no wonder that, contrary to most programs on television today, its ratings actually rose during the course of its eighteen-episode season as the word spread that this was a show that was truly special.

It’s the Pearson family that’s at the core of This Is Us with Milo Ventimiglia playing the hard-working, earnest dad Jack and Mandy Moore as his loving and supportive wife Rebecca. Pregnant with triplets during the show’s pilot, she gives birth to Kevin (Parker Bates at age 9, Logan Shroyer at age 15, Justin Hartley as an adult) and Kate (Mackenzie Hancsicsak at age 9, Hannah Zeile at age 15, Chrissy Metz as an adult) but loses the third child. Brought to the hospital that same night is a black foundling left at the local fire station, and Jack and Rebecca decide to adopt him to complete the triumvirate they’d been planning on for months, a darling boy they name Randall (Lonnie Chavis at age 9, Niles Fitch at age 15, Sterling K. Brown as an adult). The episodes cover the life and loves of these parents and children along with significant others who are part of the Pearson clan’s extended family.

The episodes weave a continuously fascinating saga of these people jumping back and forth in time as their narratives constantly compare and contrast to one another (even occasional contrivances to better link past to present don’t offend). Even though the storytelling isn’t linear, there’s never any loss of clarity as to the time frame being explored at any given moment (once one gets past the pilot, that is, which shocks first timers with the revelation that all of the various stories being told are not happening in the present time). The present day stories of the Pearson children find each of them in crisis: Kevin, the gorgeous but rather vapid actor, is a television star tired of appearing in a mindless sitcom and looking to expand his horizons by moving to New York to pursue stage acting (he also has an ulterior motive for the New York jaunt which comes out in later episodes in the season). Kate has weight issues, is grossly obese, and eager to make a life change when love comes into her life in the person of a fellow weight-challenged person Toby Damon (Chris Sullivan). Studious, serious-minded Randall has a loving wife (Susan Kelechi Watson) and two lovely daughters (Faithe Herman, Eris Baker) but has his perfect world blown apart by his discovering the identity of his birth father William Hill (Ron Cephas Jones), a former drug addict currently dying from cancer, who becomes a very real part of their world. In the past scenarios, we see Jack and Rebecca at various stages of their courtship and marriage featuring the struggling, triumphs, and tragedies that they endure to keep the family going.

The acting is truly exemplary. Five members of the cast earned Emmy nominations for the first season (with Gerald McRaney who plays Rebecca’s delivery doctor earning a guest actor statuette for his very moving performance in three different episodes of the season, and Sterling K. Brown was honored as this season’s best actor in a drama series), but all of them are deserving of accolades for truly inspired work. Milo Ventimiglia plays the perfect father most of us would dream of having who has buried within him quite a few dark and painful issues which come out as the season progresses. What’s more, a few episodes into the season, we learn that his character passed away when his children were sixteen, so the ticking time bomb of that death episode weighs heavily over all of the subsequent episodes of the season (spoiler alert: the death doesn’t occur during any of the season one episodes). Mandy Moore has one of the hardest jobs of the cast traversing both the older and present day timelines and having to age accordingly depending on which era she’s inhabiting. Hers is the most underrated performance of the season.

Here are the eighteen episodes contained on five discs in the first season set:

7 – The Best Washing Machine in the World

The show is broadcast on NBC at 1080i and these 480p transfers with a 1.78:1 widescreen television aspect ratio are reasonable down-conversions of the high definition masters. Sharpness is generally quite good, better in close-ups than in medium and long shots. Color is strong and true with genuinely believable skin tones. Black levels are also very good. But there is notable moiré and aliasing to be seen in almost every episode, something that would be lessened had Fox chosen to release this popular series on Blu-ray. Each episode has been divided into 12 chapters.

The Dolby Digital 5.1 soundtrack for This Is Us is noticeably subdued compared to other drama series on television. Dialogue has been well recorded and appears in the center channel, but there is really very little surround information in the mix (surprising since much of the season takes place in New York) apart from the background score which wells up in emotional moments but otherwise stays fairly silent.

Aftershow (2:51:39): for seventeen of the eighteen episodes, a sit-down discussion of characters and their motivations lasting from five to nine minutes is held between selected cast members who are occasionally joined by creator/producer Dan Fogelman or producer-director Ken Olin.

The first network drama to land an Emmy nomination for Outstanding Drama Series since 2011, This Is Us was given its network’s show of confidence by being renewed for two additional seasons midway through its first season. It’s an emotionally deep and affecting series filled with memorable performances and storylines of such depth and passion that it’s nearly impossible to drop once you’ve become acquainted with its many pleasures and treasures. Highly recommended!

After Sterling K. Brown's win last night at the Emmys, I have slightly adjusted the review to include that information. Sorry the series didn't earn additional honors as they certainly would have been deserved, but with so much great television out there, any win is a phenomenal achievement.
You must log in or register to reply here.
Share:
Facebook Twitter Reddit Pinterest Tumblr WhatsApp Email Link 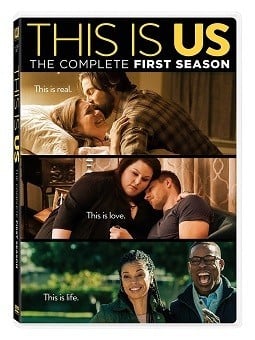