Jordan Peele's follow up to Get Out(2017) is another unique vision of the horror genre. 4 Stars

Writer/director Jordan Peele has followed up his celebrated first feature Get Out (2017) with another film that is more squarely in the horror genre with Us, an interesting new variation on the doppelganger legend.

Us follows Adelaide(Madison Curry), a girl whose childhood trauma seems to follow her into adulthood.  Young Adelaide wanders away from her parents at the pier in Santa Cruz and confronts a mirror image of herself in an abandoned funhouse.  Adelaide does not seem herself after she reunites with her parents, and her explanation of confronting a doppelganger is minimized by others as something that must have been a reflection in a mirror.

Thirty-some years later, Madison(Lupita Nyong’o) returns to Santa Cruz on vacation with her husband Gabe Wilson(Winston Duke), daughter Zora(Shahadi Wright Joseph), and son Jason(Evan Alex).  Things get crazy after they lose electricity in their cabin and see a family eerily holding hands in identical jumpsuits at the end of their driveway.  Things only get worse from there for the Wilsons.
Jordan Peele(Key & Peele) demonstrated his mastery of the horror and suspense genre with his first feature, Get Out(2017).  Us is also written and directed by Peele with a keen eye and ear to combine visuals with music and sound to inspire genuine anxiety in the viewer.  Peele is also seen currently as the host on the most recent revival of The Twilight Zone on CBS All Access.
The actors’ performances elevate the entire piece, and the song “I Got 5 On It” by Luniz is used sublimely in the soundtrack in a unique manner to heighten the suspenseful tone of the film.  The score by Michael Abels(Get Out) is also essential in its role of setting the urgent tone of the film.  Us takes a few intriguing twists and turns, and opinions may differ as to whether the twists are earned honestly or not.  Us is an intriguing and immersive horror film, regardless of whether the viewer accepts the plot turns as the stakes rise to its conclusion.

Us appears on 4K UHD in its original 2.39:1 screen aspect ratio.  This is a fine transfer with exquisite fine detail and subdued chromatic tones with HDR.  The opening night scenes in Santa Cruz feature unusual clarity with more suffused imagery for the bulk of the film.  Shadow detail is likewise excellent for the cinematography that employs shadows and darkness to enhance the suspense.

Us is presented in an English Dolby Atmos mix that makes exceptional use of the soundstage.  Directional audio is used exceedingly well with a sound mix that uses silence at discreet intervals to elevate the nervous mood of the screenplay.  The use of thunder, crash of surf, and cacophony of carnival music and crowd noises in the opening scenes sets a high standard of audio excellence that never diminishes through the remainder of the film.  This is definitely among the best presentations of Dolby Atmos that I have experienced in a home theater setting.

The Duality of US(4:45):  Director Peele and the principal cast discuss the duality of their performances in the film.
Tethered Together:  Making US Twice(7:28):   Creators discuss the challenge of having 4 actors portray up to 8 different characters in certain scenes and the design choices for the characters.
Redefining A Genre: Jordan Peele’s Brand of Horror(5:31):  Cast and crew discuss Jordan Peele’s enthusiasm for the dichotomy of horror and comedy.
The Monsters Within US(9:56):  Writer/director Peele talks about his influences and interest in the doppelganger legend and how it inspired him in creating this film.
Becoming Red(4:09):  Lupita Nyong’o stayed in character on set for her portrayal of Red, and this featurette has some behind the scenes footage of her in character between takes.
Scene Explorations(7:36):  Director Peele discusses the challenges of creating 3 different set pieces in the film, which are playable individually or with a “Play All” selection, consisting of Seven Second Massacre, It’s A Trap, and I Just Want My Little Girl Back.
Deleted Scenes(6:28):  These scenes are playable individually or with a “Play All” selection, consisting of I Am Not Even Near You, Rabbit Season, That’s Badass, Driftwood, The P Is Silent, and I Wanna Go Home.
We’re All Dying(6:22):  Additional footage of Winston Duke and Tim Heidecker improvising during the beach scene.
As Above, So Below: Grand Pas de Deux(5:02):  Extended version of the dance sequence.
Included is a blu-ray disc of the film and a paper insert with validation code is included for digital download of the film via the Movies Anywhere app.

Us is an intriguing and creepy take on the doppelganger myth, and flirts with the conception of privilege in society, and the idea that someone else suffers in place of one who is blessed.  The video and audio presentation in 4K is flawless, with a particularly great Dolby Atmos presentation.  The special features are fairly comprehensive and include some discussions about the plot turns and themes in the film which may be helpful for viewers who are intrigued but confused by the twists and turns of the plot.  Us is one of those films that lends itself to multiple viewings to absorb all of its nuances. 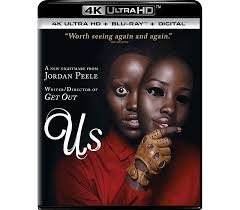