Forum List What's new Dark Style Change width
Log in Register
What's new Search
Menu
Log in
Register
Navigation
Install the app
More options
Dark Style
Close Menu
Posted on June 16, 2019 by t1g3r5fan
You are using an out of date browser. It may not display this or other websites correctly.
You should upgrade or use an alternative browser.
Scream-style horror gets the Collector's Edition treatment 4 Stars

With the success of Wes Craven’s Scream (1996), studios found themselves looking for new projects to cash in on the popularity of the movie. Enter Urban Legend, a take on the Scream formula that also manages to stand on its own merits from a first-time director and screenwriter just breaking into the business. Previously released on DVD and Blu-ray by Sony, Shout Factory – through the Scream Factory sub label – has picked up the film and given it the “Collector’s Edition” treatment on 2 discs.

The small college town of Melbourne, New Hampshire is rocked by the shocking death of Pendleton University student Michelle Mancini (Natasha Gregson Wagner). When more students either turn up dead or missing, one student – Natalie Simon (Alicia Witt) – believes that these events are tied up with a number of urban legends being brought to horrifying life; what Natalie doesn’t know is that the deaths are also tied to a dark secret from the college’s past as well as one from her own, and they’re about to collide on one dark and stormy night…

Released in the wake of the success of Scream, Urban Legend manages to be both entertaining and scary in equal doses while forging its own identity. First time director Jamie Blanks has a great eye for visuals and a knack for John Carpenter-style suspense rather than straight up blood and guts like most other films in this genre around the time; the addition of a sense of humor certainly helps as well. If there’s only one major flaw with the movie, it’s that some of the tropes are already familiar to those who already have seen a handful of the horror movies that have utilized a few of the legends mentioned within, diminishing some of the suspense in crucial moments of the movie. Nevertheless, the movie does manage to deliver the goods more often than not and maintain interest throughout its brisk running time.

Featured among the cast of up and comers is Alicia Witt, whose Natalie acts as both the proverbial “final girl” and as the main focus of the story; Jared Leto, still years away from Oscar anointed glory in Dallas Buyers Club (2013), is a very driven journalism student who – along with Natalie – uncovers the dark secret of the university. Stealing the spotlight from both of them is Rebecca Gayheart, who is a very bubbly presence whose Brenda holds a dark secret of her own; she would reprise her role in a cameo at the end of the next movie in the franchise – Urban Legends: Final Cut (2000).  Michael Rosenbaum is a hoot as the goofy one of the bunch, while horror legend Robert Englund is memorable as the professor with ties to the university’s tragic past. Also worth mentioning are Tara Reid as the campus DJ, Joshua Jackson as the campus clown (Dawson’s Creek fans may want to keep their eyes and ears peeled for a gag involving him!), John Neville – Baron Munchhausen himself – as the campus’ stern dean, Loretta Devine in a scene-stealing part as the campus security officer, scream queen Danielle Harris as Natalie’s goth roommate, Natasha Gregson Wagner as the ill-fated student whose death at the start of the movie propels the story, and an uncredited Brad Dourif as the gas station attendant whose warning to Wagner’s character goes unheeded.

The film’s original 2:35:1 aspect ratio is preserved on this HD transfer, which is likely the same one used for the previous Sony Blu-ray release. Film grain is organic and sturdy, with even skin tones, inky blacks and fine details rendered faithfully. There’s minimal instances of age related issues like scratches, dirt, dust or speckling; on a whole, this is likely the best the movie has ever looked on home video.

There are two options on this release: a 5.1 DTS-HD Master Audio track (the default option) and a 2.0 DTS-HD Master Audio track. Sound effects are strong on both, along with the dialogue being clear and great fidelity and ambience given to Christopher Young’s tense score. Both tracks likely represent the best the movie has ever sounded on home video.

Commentary with director Jamie Blanks, producer Michael McDonnell, and assistant Edgar Pablos, moderated by author Peter M. Bracke – Newly recorded for this release, this commentary reflects on the movie and some of the interesting details during the production; an informative and insightful track.

Commentary with director Jamie Blanks, writer Silvio Horta, and actor Michael Rosenbaum – Carried over from the previous home video release, this commentary is more entertaining while it does have some of the details on the production; it’s also a bit dated too (the remark about Tara Reid becoming a big star hasn’t aged well at all).

Urban Legacy (147 minutes) – Presented in eight parts, the story of the movie from initial conception to casting, filming, release and reception is recounted by many of the cast and crew of the project; among those interviewed include director Jamie Blanks, writer Silvio Horta, producer Michael McDonnell, and actors Alicia Witt, Rebecca Gayheart, Robert Englund, Michael Rosenbaum, Tara Reid, Loretta Devine, Danielle Harris, and Natasha Gregson Wagner, just to name a few.

Behind-the-Scenes Footage (54 minutes) – Presented in three parts, never before seen footage of the cast and crew at work on the movie as well as a few lighter moments in between filming.

Archival Making 0f Featurette (10:09) – Though labeled as a making of featurette, this is actually a B-Roll with some behind-the-scenes footage as well as a scene that was deleted from the final cut; there is some running commentary, but I haven’t been able to figure out who’s on the track here.

Gag Reel (2:14) – A brief collection of some of the bloopers done that obviously never made it to the final cut.

Deleted Scene (2:40) – The scene shown in the B-Roll is presented without the running commentary.

TV Spots (1:36) – 4 TV promos for the movie are presented in quick succession.

Though released in the shadow of Scream, Urban Legend has managed to attract a fanbase as well as spawning a couple of sequels of its own over the years. Shout Factory has easily surpassed all previous home video editions with great marks in both audio and visual quality and a treasure trove of special features to satisfy the most ardent fans of the movie. This makes edition an easy recommendation for upgrading or for adding to your collection of classic and cult horror movies. 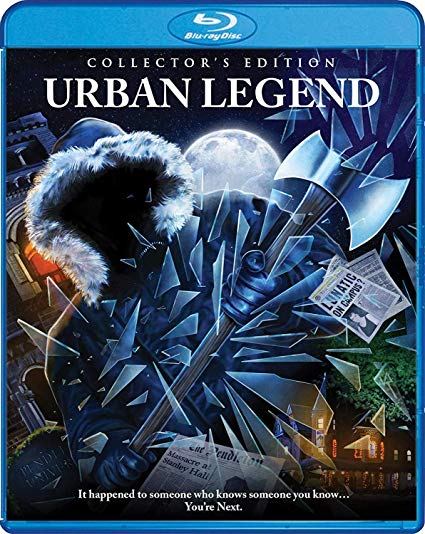