A sprawling epic set in South Africa during the early years of European settlement, Henry King’s Untamed is a bit untamed itself condensing a meandering narrative into less than two hours of screen time and keeping its top-billed star off screen for large portions of that running time.

A sprawling epic set in South Africa during the early years of European settlement, Henry King’s Untamed is a bit untamed itself condensing a meandering narrative into less than two hours of screen time and keeping its top-billed star off screen for large portions of that running time. The movie certainly presents some unique sequences, and it doesn’t lack for action or melodrama (in some ways resembling Gone With the Wind with its feisty heroine and featuring a love triangle played against a background of uprisings and conflict spreading over many years). But, the highs and lows of the main character seem abrupt and arbitrary, and believable motivation isn’t a key facet of the storytelling.

Headstrong lassie Katie O’Neill (Susan Hayward) and Dutch freedom fighter Paul Van Riebeck (Tyrone Power) meet in Ireland in 1847 where she’s instantly smitten with the strapping young man. But his first love is his people fighting for their rights in South Africa, a land Paul recommends to the O’Neills if they ever get the wandering spirit. Within a year when the Irish potato blight wipes out their farm, Katie, her new husband Shawn (John Justin), and their baby head out to Capetown to begin life anew. Once there, they learn land is being given away free in the interior, but it requires travel through treacherous Zulu territory. Joining a wagon train with similarly minded settlers, the homesteaders come up against the ferocious Zulus, and Katie loses Shawn to a Zulu arrow, but Paul’s Free State fighters save the day and convey them to their promised territory. Katie realizes she has always been in love with Paul, but she’s being pursued by wagon train master Kurt (Richard Egan) who can’t get the temperamental Irish lass out of his mind. With Paul heeding the call to arms once more, Katie allows Kurt to work her land, not making any promises to him but secretly hoping Paul will return to her one day.

Based on the book by Helga Moray, the screenplay by Talbot Jennings, Frank Fenton, and Michael Blankfort crams lots of emotional upheaval into less than two hours, but the shifting tides for Katie and her kin are abrupt and too soapy for belief. For example, later in the film, Katie barters her favorite emerald gown for a huge uncut diamond which sets her up to live splendidly in Capetown and then in the next scene informs us she squandered her fortune and now needs to find more diamonds. Earlier, her farm goes from thriving to ruined from one gigantic storm, and the emotional rivalry between the two men for her favors is mechanical narrative writing of the most mediocre kind. The rivalry does lead to an unusual sequence: a duel with whips which is both novel and exciting, and director Henry King also uses the wide Cinemascope canvas to display splendidly the lengthy snake-like ribbon of the wagon train stretching over miles of South African terrain as well as wowing us with the enormity of the two Zulu attacks in all their ferocity and cunning (with seemingly thousands of extras). There is a climactic shootout between the Boar commandos and outlaws which have taken over a quiet town, but the last third of the film is herky-jerky in its plotting and execution with a romantic happy-ending denouement which again lacks believable motivation and continuity with what has gone before.

Top-billed Tyrone Power makes only sporadic appearances in the film popping into and out of Katie’s life as the needs arise (you’ll immediately think of Clark Gable in Gone With the Wind and Robert Redford in Out of Africa, both top-billed but with limited screen time in comparison to their female co-stars). Susan Hayward is the true star of the film often serving as its narrator to segue between scenes where long periods of time have passed. Both stars play what’s on the page, but they add no new colors to their previous performances. She especially has the more colorful character but only occasionally really seems to dig deeply within for the person she’s portraying. Power pretty much walks through his limited amount of screen time not helping us to understand at all why he’s the be all and end all for Katie. Once again, Richard Egan picks up the slack playing a roistering buck determined to win Katie and willing to do just about anything to claim her. Rita Moreno plays one of her sassy slave girls devoted to Egan’s Kurt though he only uses and abuses her when Katie isn’t around. Agnes Moorehead is completely wasted as the nursemaid to Katie’s children (the younger one is played by the tiny Kevin Corcoran before he gained fame at Disney), and wonderful actors like Hope Emerson, Henry O’Neill, and John Justin get only a few moments to display their wares.

Before the movie begins, we are presented with the dreaded “This movie has been reformatted to fit your screen” card, but actually that never happens. Though the liner notes proclaim this to be a full frame transfer, it’s actually in the Cinemascope 2.55:1 aspect ratio but is merely letterboxed without anamorphic enhancement. Without it, sharpness is only average, and the DeLuxe color seems a bit faded, brownish, and dated in most of the scenes (the opening sequence supposedly set in Ireland has the best color by far). There are a few random specks here and there, and the reel change markers are in full view, but the most annoying artifact is the aliasing which again might have been helped had the transfer been anamorphically enhanced. The movie has been divided into chapters every ten minutes so this movie has 12 chapters.

Volume levels need to be adjusted downward before starting the film to prevent distortion or damage to your equipment. The Dolby Digital 2.0 stereo sound mix incorporates the directionalized dialogue as best it can from the original sound elements, and the stirring Franz Waxman score and the atmospheric effects are blended nicely with the dialogue with no problems. While there may be a little bit of low level hiss present, it’s never a major concern, and the sound remains the disc’s strongest feature.

Henry King’s Untamed was probably more enthralling in its day than it is today with its haphazard narrative, uneven though occasionally impressive direction, and patchy star performances. At least the Fox Cinema Archive release presents the entire widescreen frame even if it isn’t anamorphically enhanced. For this series of releases, that’s often more than we’ve come to expect. 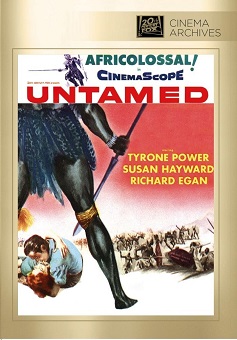