Forum List What's new Dark Style Change width
Log in Register
What's new Search
Menu
Log in
Register
Navigation
Install the app
More options
Dark Style
Close Menu
Posted on February 24, 2019 by Josh Steinberg
You are using an out of date browser. It may not display this or other websites correctly.
You should upgrade or use an alternative browser.
Beautiful production of a dull script. 3.5 Stars

The 1955 CinemaScope historical epic Untamed features incredible production values, beautiful cinematography, an expressive score, a very lively multichannel sound mix and a good cast. But despite the array of talent in front and behind the camera, the film itself is a dull and unremarkable affair, a sort of South African Gone With The Wind-type whose script never finds a rhythm.

Twentieth Century Fox’s 1955 CinemaScope production of Untamed is a lavish affair which features some incredible location work, and a noteworthy cast led by Susan Hayward that also featured Tyrone Power, Richard Egan, Agnes Moorehead and a young Rita Moreno. But despite the presence of director Henry King, a steady and respected hand, the film cannot overcome a messy, sprawling script that shortchanges the cast. Based on a 1950 novel by Helga Moray, the script (credited to Michael Blankfort, Frank Fenton, Talbot Jennings and producer William A. Bacher), is never able to solve the problem of what to do with a selfish, headstrong protagonist wandering through a history that’s largely unfamiliar to its audience and mostly unexplained within the story.

The film begins with Katie O’Neill (Hayward), a young woman in Ireland circa 1847 who happens to meet South African commando Paul van Reibeck (Power), who is in search of horses to send back to his homeland. Katie is instantly smitten with Paul, but Paul is more interested in establishing a Dutch Free State in South Africa than sticking around in Ireland to fall in love. As the famine destroys any hope for a normal life in Ireland, Katie quickly marries a local (while still holding a flame for Paul) and convinces her new husband to move to South Africa. By the time they arrive, Katie has had a child, but their happiness is quickly ended when her new husband is killed by hostile Zulu tribes on their journey across South Africa. Paul reemerges just in time to save the day, but Katie has already shown affections for a local leader, Kurt Hout (Egan). However, Katie quickly leaves Kurt in favor of Paul. Soon, however, the call of South African independence beckons Paul, who again chooses his political cause over love. (Why Paul cannot campaign while being in love with Katie is never sufficiently explained.) After publicly declaring her hatred for Paul, Kurt decides to try to win Katie’s hand again, and persists even when she reveals she is pregnant with Paul’s child. Angry with Paul, unimpressed by Kurt, and always on the look for a better life, Katie must find a way to make the most of her situation. Meanwhile, the threat of another Zulu attack is a potential that’s always present on the horizon.

While the story certainly has potential, the screenplay doesn’t allow a lot of opportunities for any of the actors to do their best work. Though Hayward is capable of being a likable presence, the script makes her character seem more selfish and conniving rather than adventurous, and despite the severity of her travails, the character is rarely sympathetic or enjoyable to spend time with. Though he has top billing, Power’s role is more of a supporting one, and he is absent for long stretches of the film; when he is present, his role is so underdeveloped that it can be difficult to understand why Katie has fallen so hard for him. Egan does the best he can with the thankless role of Kurt, and while Moreno has little to do other than play the scorned lover, she still lights up the screen.

Even the production values can only take this film so far. Impressive location work is occasionally spoiled by the extensive use of process photography to insert the lead actors into the fray. And Franz Waxman’s score is beautifully represented in the multichannel sound mix (which also features delightfully wide directional dialogue), it’s not enough to make up for the fact that no one really has anything interesting to say. At 111 minutes, is both too short and too long; too short to give any of the detail or context that might make the history interesting, and too long for what little story it does tell. Still, at its best (like the sequence where the Zulus attack Katie’s caravan before Paul rides to the rescue), the film makes excellent use of the CinemaScope frame and can be genuinely exciting. It’s a shame the rest of the script doesn’t live up to those moments.

Untamed is presented in its original theatrical aspect ratio of 2.55:1. The transfer, provided by Twentieth Century Fox, is another stunning example of early CinemaScope and is simply marvelous to behold. The image is steady, clean and clear, with good color and contrast, with natural-looking grain that seems appropriate for the period. With the exception of some process shots which stand out more clearly (and are simply part of the film’s original look), this is a gorgeous presentation.

Two lossless options are provided, both in the DTS-HD MA lossless format: a 5.1 track and a 2.0 track. The 5.1 track retains the film’s original directional dialogue and is remarkable. The very wide soundstage features very dimensional use not only of dialogue but also of Franz Waxman’s score; sound effects during the Zulu attacks also offer some very pleasing separation. Dialogue is well recorded and easy to understand in the mix. There are no issues with any age-related artifacts. The 2.0 track has far less separation than the 5.1 track, but still offers good fidelity.

Original Theatrical Trailer (2:21, SD) – Cropped and letterboxed within a 4×3 frame, the trailer makes the film appear more exciting and focused than it actually is.

Untamed is a historical epic which features beautiful location work, some good performances and direction, but a dull script that paints its central character in an unlikable fashion. Despite the film’s shortcomings, Twilight Time’s presentation is first rate, with a beautiful CinemaScope transfer and an incredible multichannel surround mix, along with the usual isolated score option and booklet.

I don't believe I ever seen this movie.
P

I’m looking for the other African movie Fox made that I remember fondly with Stuart Whitman and Juliet Prowse The Fiercest Heart to be released on Blu Ray.

Thank you for the review. I've never seen the film and it looked like it might be an interesting movie so I'm a little let down that the script is pretty dull. I'll probably still pick it up eventually though for the location shots and the beautiful early Cinemascope imagery.

At the least, the transfer is great, the photography is beautiful and the sound mix was good too.
You must log in or register to reply here. 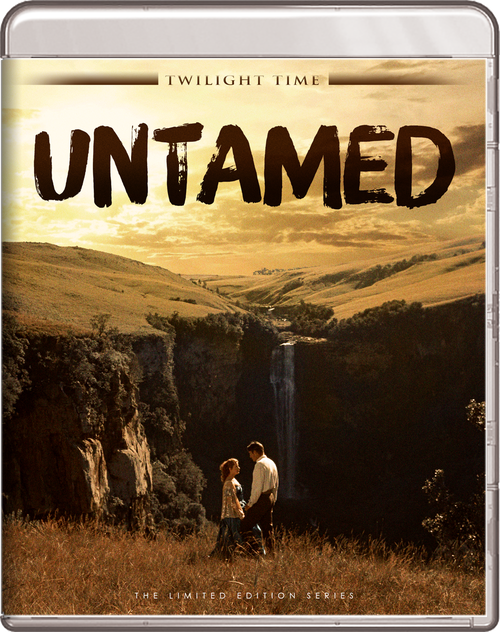