Although a great thriller with fantastic direction, Unsane suffers from the odd choice of being shot with an iPhone 7 from an established/successful Director who at this point could get any resource if he so desired.

Unsane follows Sawyer Valentini (Claire Foy) who has moved out of town to escape a stalker, David Strine (Joshua Leonard). Although miles away, Sawyer’s fear of this stalker has her changing routines daily. She takes lunches at different times, she leaves to and from work at different times and even has her Tinder dates promise to never contact her again in any way whatsoever after their date. To her this has now become normal. She would rather give into these “rules” she’s made for herself than running into David. Even with these precautions, Sawyer still “sees” David. After having a breakdown with a random man she met on Tinder, she decides to see a counselor where she unknowingly signs a release volunteering herself to spend 24 hours in the hospital. While being held against her own will, she gets into several physical interactions with other patients that prolong her stay. One night, Sawyer sees a doctor name George Shaw whom she believes is David. After causing a scene upon seeing him, the nurses and doctors do a background check on George only to see he has a clean record.  She is convinced George is David and she will try everything to get out of that hospital.

There is no doubt that Steven Soderbergh (Traffic, Ocean’s Trilogy, Logan Lucky) is a great director and Unsane shows this but his decision on shooting this film on an iPhone not only comes off as odd but also as confusing. Soderbergh even went as far as saying “This is the future.” The film is good and has a lot of tension but it does suffer from a lot of strange character choices. For someone who truly is desperate to get out, Sawyer does not know how to control her emotions. Every encounter she faces ends up with her punching someone, which after a few times it got frustrating. What the film does well is asking the question of whether Sawyer actually deserves to be there. It makes the audience think if this person is saying the truth or if she actually is mentally ill and making things up. You find yourself fighting with this question – Is David really in the hospital or is Swayer crazy?. That question remains unanswered for roughly the first two thirds of the movie and keeps the audience wanting for answers. That doubt the audience has for Sawyer is something Soderbergh is good at establishing – Just like in Logan Lucky we believed for a moment that Channing Tatum’s character actually did give the money back. Soderbergh’s direction is very noticeable and Claire Foy gives an amazing performance – she carries the whole film.

Although a great thriller with fantastic direction, Unsane suffers from the odd choice of being shot with an iPhone 7 from an established/successful Director who at this point could get any resource if he so desired

Soderbergh’s exact quote was “Anyone going to see this movie without any idea of the backstory to the production will have no idea this was shot on the phone” but I have to disagree. From the very beginning of the movie we can see that something is off. For starters, the aspect ration is 1.56:1 which caught me by surprise (It is so uncommon that closest one on our list was 1.66:1 – which left me no choice but to list it as that). The highlights are overblown and the color spectrum is something you should not see on a Blu-Ray. As much as I tried to ignore it, I constantly found myself taken out of the film and I’m sure I was not the only one. Even if the audience won’t “notice” that this was shot on a phone, they will definitely think it was made with a low quality camera. I’m sure in the future we will have amazing cameras on our phones that will make this possible but now is not the time. That being said, this does not mean it should never be done. If you are an aspiring filmmaker who has an amazing story to tell but no budget or resources, by all means, please, grab your phone and shoot it; put yourself out there. There are several good camera movements that take you back into the film but they can be overlooked because of the film’s own look. I believe Soderbergh’s point was to say anyone can make a movie – which is true, but I do not agree with his statement.

Although, Unsane only features a DTS-HD Master Audio 5.1 lossless soundtrack, it is well mixed. The dialogue is nice and clear and at times makes you remember that you are actually watching a Hollywood movie and not a cheap indie film. The surround speakers are used for random noises and for the music to fill the room which works great! There is a scene where Sawyer is drugged and the music and noises completely take over the scene and literally surrounds you with sound. The LFE is not used as much but when it is, it is sneakily thrown in for impact in more intense scenes. The audio might justify the purchase of this Blu-Ray – it is miles ahead of the video quality.

Even with all its flaws, Unsane is a good thriller and worth the watch. Soderbergh’s choices might be unclear but his direction and suspense make this film a good time. 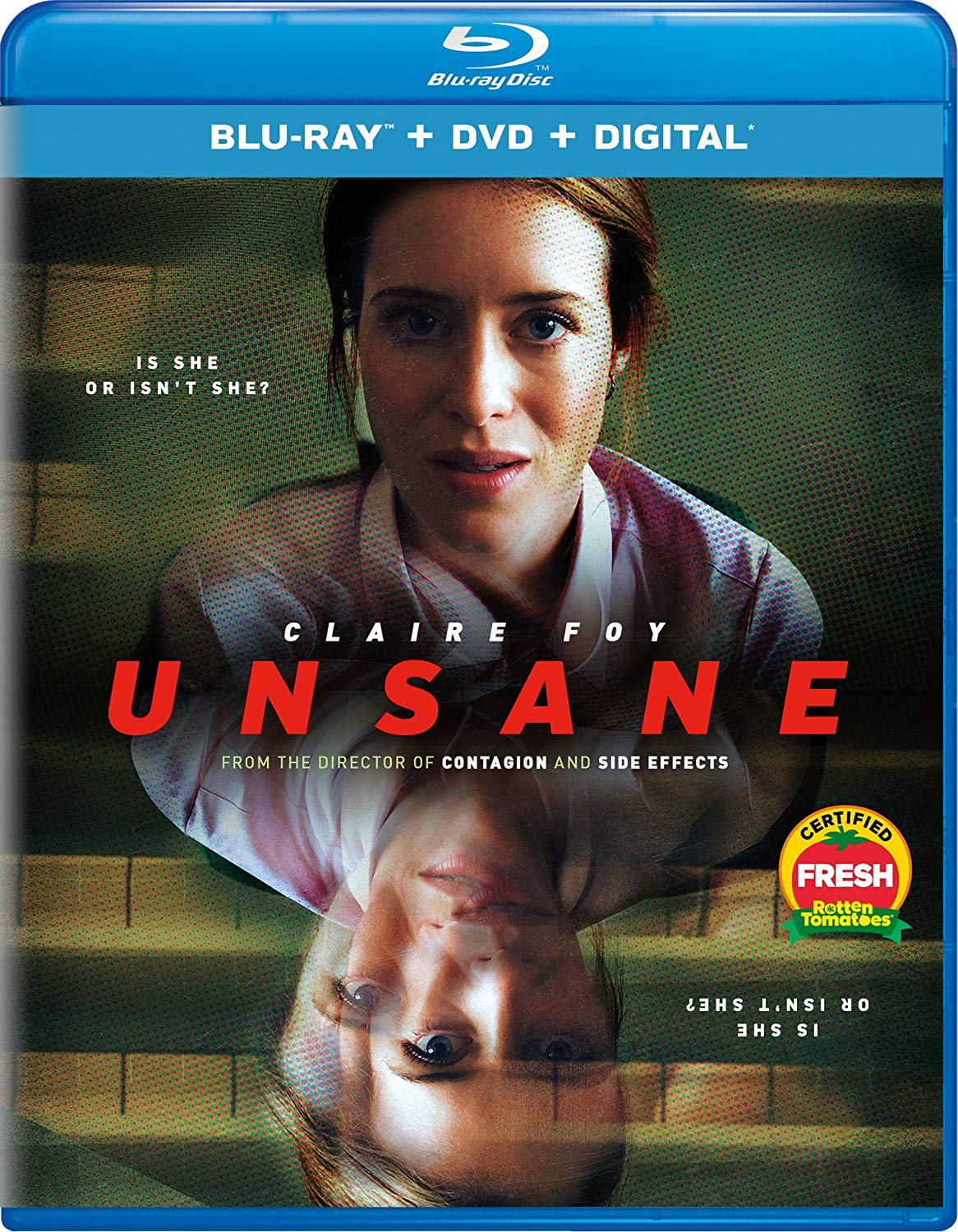