The mission statement of California-based Magico is pretty clear. The company was created over a decade ago for the sole purpose of leading a “no holds-barred assault on what is possible in contemporary loudspeaker design.” That’s why it might come as a blessing that the engineers there have come up with an “affordable” home theater range of loudspeakers, but don’t reach for your wallet just yet.

It’s been 15 years since the launch of its first commercial product, but there are voices out there that claim the company makes some of the best-sounding loudspeakers “on the planet.” These include the Magico Ultimate, floor-to-ceiling loudspeakers setting you back a sobering $675,000 for the pair.

The third quarter of 2019 sees three new models join Magico’s range, the A-Series: a pair of standmount speakers called the A1, alongside the AAC centre speaker and ASUB active subwoofer. When available, the A1 will be the least costly way to own a pair of Magico speakers, while the AAC and ASUB deliver a complete A-Series home cinema solution. 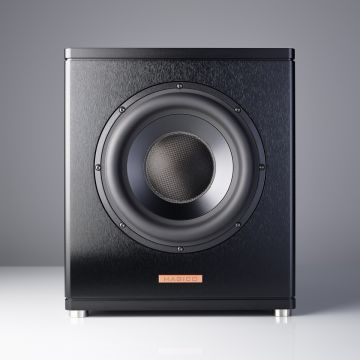 All three models are expected to ship in Q3 2019, but as of yet – and on the back of the High End Munich show which closed doors yesterday – the only pricing available that we’ve seen so far is in GBP. You can probably multiply by one to get a fair judge of anticipated prices in USD:

No info on these models just yet on the Magico website, but you can learn more about the company’s product lines there.