Posted on April 18, 2016 by Richard Gallagher
A gorgeously restored film noir which is highly recommended 4.5 Stars

Try and Get Me! (original title: The Sound of Fury) is a relatively obscure but intense film noir which packs a wallop. Featuring outstanding performances by Frank Lovejoy and Lloyd Bridges, it is being released on Blu-ray by Olive Films with excellent audio and video from Paramount via the Film Noir Foundation.

Try and Get Me! (original title: The Sound of Fury) is a relatively obscure but intense film noir which packs a wallop. Featuring outstanding performances by Frank Lovejoy and Lloyd Bridges, it is being released on Blu-ray by Olive Films with excellent audio and video from Paramount via the Film Noir Foundation.

Howard Tyler (Frank Lovejoy) is an Army veteran who has recently moved from Massachusetts to Santa Sierra, California with his wife and son. Unfortunately, finding steady employment has been difficult. After being turned down for a job at a chemical plant, he ruefully asks his wife, “Can I help it if a million other guys had the same idea?” Later he wanders into a bowling alley and orders a beer at the bar. He strolls over to watch flashy bowler Jerry Slocum (Lloyd Bridges) finish up a game. The two men strike up a conversation and find that they have something in common, as Jerry also is a veteran. He invites Howard back to this hotel for a drink, where he offers his new friend a job as a driver. When Howard asks what kind of work it is, Jerry responds, “Oh, you know, knock over a gas station, maybe a hamburger joint, a liquor store, nothing risky.”

Howard initially turns down the offer, but he relents after Jerry berates him for being unwilling to take the opportunity to make some real money. He leaves a message for his wife that he will not be home for dinner because he has to see someone about a job, and he and Jerry drive out to a rural grocery store/gas station which is adjacent to a trailer park. Jerry empties out the store’s cash register, and he splits the haul with Howard. Flush with cash for the first time in recent memory, Howard returns home with a bagful of groceries and tells his wife that he has gotten a legitimate job on the night shift at the local cannery. Their money problems, it seems, are over.

Meanwhile, local syndicated columnist Gil Stanton (Richard Carlson) is hosting a dinner party at his home. One of the guests is the local newspaper publisher, Hal Clendenning (Art Smith), who receives a phone call about the robbery. This is the third stick-up in Santa Sierra in a few days, and Hal believes that “our circulation can stand a little crime wave.” He offers Gil a bonus if he will cover the story. The next day Gil’s column about a crime wave in Santa Sierra is front-page news, and for the next two weeks he continues to write vivid columns about the “outbreak of hoodlumism.” In the meantime Jerry is becoming impatient with small-time jobs, and he has planned a big payday by kidnapping the son of a wealthy man, a crime which does not go as planned.

Try and Get Me! is loosely based upon the real-life kidnapping of Brooke Hart, the son of a wealthy retailer, in San Jose in 1933 (that kidnapping also was the inspiration for Fritz Lang’s first American film, Fury). If you read up on the Hart kidnapping after watching the film you will see that its exciting climax, which at first glance seems to be implausible, actually adheres closely to the facts. It is well directed by Cy Endfield (Zulu, Mysterious Island) from a script by Jo Pagano, who adapted his own novel. Although Lloyd Bridges is billed fourth in the cast, he steals all of his scenes with a dazzling performance as the charismatic but vain and vicious Jerry. Frank Lovejoy is believable as Jerry’s reluctant accomplice, and Richard Carlson is fine as the respected newspaperman who inadvertently stirs up trouble when he ventures into yellow journalism. Adjele Jergens is memorable as Jerry’s brassy blonde girlfriend Velma (has there ever been a film character named Velma who wasn’t brassy?), and Katherine Locke is excellent and sympathetic as Velma’s lonely friend, Hazel. Joe E. Ross appears uncredited as a night club entertainer.

Leonard Maltin has written that Try and Get Me! “deserves to be better known,” and I agree. This excellent Blu-ray from Olive Films is highly recommended and should gain the film a wide audience. As noted, it was originally released as The Sound of Fury, but after performing poorly at the box office it was re-released under the more evocative title.

The 1080p black & white image is properly framed at 1.37:1 (the box says 1.33:1, but on my screen it measures 1.37:1). It is encoded with the AVC codec and the print is pristine. The opening title says Try and Get Me! so this obviously was struck from a re-release print. The image is very sharp, with strong contrast, inky black levels, and good shadow detail. It displays a nice gray scale and natural grain, with no evidence of excessive digital manipulation. There are some minor fluctuations (at the 26:45 mark a close-up of Gil Stanton is considerably more grainy than the shots immediately before and after), but they are barely noticeable.  The film has been divided into eight chapters. Various sources give different running times (IMDB says 85 minutes and Maltin’s guide says 90 minutes), but this release clocks in at 92 minutes.

Cinematographer Guy Roe filmed all of the exteriors on location in Arizona and California, and those scenes add a significant amount of authenticity to the proceedings. All in all this is an outstanding transfer.

The excellent audio is DTS-HD MA 2.0. There is little in the way of stereo separation, but fidelity is excellent. Dialogue is clear and understandable, and there are no age-related anomalies to interfere with one’s viewing pleasure. The music by Hugo Friedhofer sounds terrific.

This is a bare-bones Blu-ray release with no extras.

Try and Get Me! is a long-neglected film noir which has been handsomely restored by the Film Noir Foundation. This is a superb Blu-ray presentation, and if releases such as this sell it will bode well for more film noir releases on Blu-ray in the future. 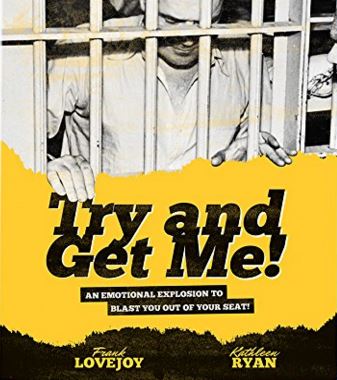