Forum List What's new Dark Style Change width
Log in Register
What's new Search
Menu
Log in
Register
Navigation
Install the app
More options
Dark Style
Close Menu
Posted on July 21, 2018 by Sam Posten
You are using an out of date browser. It may not display this or other websites correctly.
You should upgrade or use an alternative browser.

The game is real! Wherever you go, whatever you do it will find you. 4 Stars

Olivia (Lucy Hale) and Markie (Violette Beane) are sworn best friends forever. Their friendship faces the ultimate test when their group of friends are unwittingly dragged into a ‘game’ of truth or dare while on vacation in Mexico. This game has consequences that most do not: Answer the truth truthfully or die. Do the dare or die. The game only ends when all players are dead. Sounds like the best solution is just telling the truth, right? Not so fast! Early truths uncover hidden secrets that put the friendship in jeopardy. As the game progresses the gang learns that once two truths are answered in succession the next player HAS to perform a dare. And the games master manipulates the dares to pinpoint the player’s weaknesses and relationships too. With their options (and friends!) running out, how will the BFFs survive? 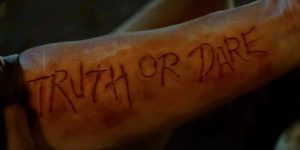 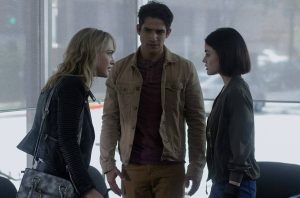 Blumhouse productions managed to become the number one hit maker of modern horror, with a winning formula for unique modern situations that usually features ensemble casts of young stars.  Truth or Dare is the latest example of that formula, precisely scripted to appeal to teen and college audiences while not turning off older viewers with giant plot holes or stupid character choices.  The cast of ToD are complex people with hidden secrets, desires and failings.  Somehow it manages to hit a PG-13 rating in a movie where more than half who start the game won’t make it to the final scenes.  Apparently you can have a slew of death scenes in 2018 as long as nobody takes their tops off.

I’d be remiss if I didn’t give a special nod to the creepy deformations that the game twists people in and around the game into.  Looking like a demonic snap chat filter it immediately alerts you to the heightened stakes and other worldly influences that have mortal consequences.  Truly well done!

Ultimately, ToD’s heart is in the friendship between Olivia and Markie, with the complications of unstated love hidden just below the surface.  The game exploits the chinks in this friendship’s armor, and peels the onion back leaving the nerves exposed raw and hurting.  The fundamental question it asks is whether or not this friendship can survive, regardless of whether Olivia and Markie both do.  The resolution to that question is wonderfully surprising and sets up a continuation of the story I hope to see someday. 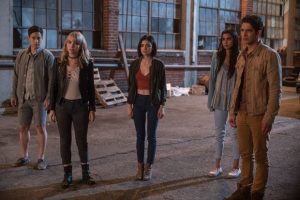 I was surprised that there is no UHD of this 2018 production, but I also didn’t feel the movie was lacking without it.  What we have here is wonderfully presented, with spot on detail despite the many dark sequences both outdoors and in badly lit interiors.  No artifacts, ringing or other distractions ever showed up.  Could it be slightly better with a HDR pass?  Maybe but it’s fine as is. 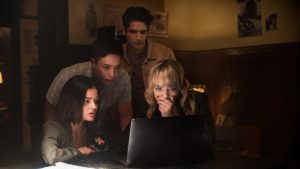 While not an audio powerhouse, the action sequences in ToD are well imaged in DTS HDMA 5.1.  There are a number of front to rear pans that surprised me with their effectiveness, and a few solid booms that let you know the subwoofer is there when it’s needed. 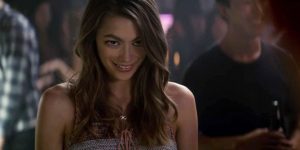 I watched the unrated director’s cut, the theatrical cut is available for those who want it.  There’s a feature length commentary as well.  Besides that there are only 2 featurettes, tho both are worthy of your time.  The first is a making of, with interviews of cast and crew talking about their experiences and highlighting the choices made and the complexities of the characters.  The second deals with the direction the deaths took, and spotlights how the death scenes are informed by the character’s foibles.

I continue to be impressed with the entire output of Blumhouse productions. Based on the trailer I was expecting a dumb teen movie, but what I saw surprised me with depth and intelligence.  The ending has a setup that is worth exploring and I am on board for the next chapter!