It’s always nice to see a comedy director stretch themselves. And this awards season, we’ve been given a movie that shows a comedy director tackling a different genre and really getting some fine results. Sadly, Trumbo isn’t that movie (the honor there goes to The Big Short), but it does get points for trying.

Trumbo features Bryan Cranston in the title role, telling the true story of Hollywood screenwriter Dalton Trumbo, known for his wit, his high quality scripts and his openly stated membership in the Communist Party.   Without spoiling anything for readers who don’t know all the details, I’ll just say that the story here covers the difficulties Trumbo and his family encounter when Hollywood turns hostile and blacklists him. And there’s a great story to tell here – it’s just that this movie never seems to find much below the surface of the water.   We see the key events of Trumbo’s life, in much the same way that Lee Daniels’ The Butler showed the Civil Rights Movement a couple of years ago – as a slimmed-down Cliff’s Notes version of the history.   We see the high points but never really get to see how or why these moments occurred. There are some great performances along the way – particularly John Goodman as gleefully sleazy film producer Frank King and especially Helen Mirren as an acid-tongued Hedda Hopper. And Cranston does an admirable job of recreating the real Trumbo’s mannerisms. But there just isn’t any there there in the end.

SPOILERS: The real Dalton Trumbo was a glorious mass of contradictions. He was an extremely successful and wealthy Hollywood screenwriter in the 1940s – and at the same time, he was an avowed Communist, constantly railing about working conditions while he lived in a lovely house with a stable.   He wrote movies that embraced humanity and relationships while remaining an irascible person in his own family. At the time that the House Un-American Activities Committee summoned him to a public show trial, he was arguably one the most successful screenwriters in Hollywood. Until he and several others admirably refused to dignify the committee’s behavior, and he spent nearly a year in prison for contempt of congress.   In addition, Trumbo and the others were blacklisted from working in Hollywood, thus cutting off their livelihoods.   Indeed, about 300 people would be on the blacklist through the 1950s before the situation ended in 1960 with Kirk Douglas’ public listing of Trumbo in the credits for Spartacus. (The real tragedy there is that maybe 10 percent of the people who were blacklisted were able to continue their careers – the others were simply chased out of the business.)   During the 1950s, Trumbo found himself working under a pseudonym and cranking out trashy scripts for B-movie houses like the King Brothers. He still crafted some great scripts, including Roman Holiday and The Brave One, but he could not take credit for that work until long after the blacklist had ended.

MORE SPOILERS: So it’s more than clear that there’s a great story to be told here.   There’s any number of interesting places this film could have gone in examining Trumbo’s life.   Director Jay Roach could have approached the situation from the notion of how the blacklist changed Hollywood – how the people who were on top one minute were on the bottom the next. He could have shown how few of the blacklisted people were able to continue their careers. He could have delved into what was driving Trumbo through his life – why was he so irascible, and was all the struggle worth it to him? (This is not to say that he shouldn’t have stood up for himself – just to note that the interesting story would be to delve into WHY he was standing up for himself.) As it is, the movie simply skips across the milestones of Trumbo’s life, from his peak in Hollywood through to his work on Spartacus.   There are a few interesting ideas along the way, to be sure: Trumbo’s penchant for being a malcontent is shown as affecting his family life almost as much as his career – he’s difficult with everyone. But we just get a quick glimpse of this – a flashy moment here or there. We also get a glimpse into what would drive an actor like Edward G. Robinson to give in to the pressure to save his career.   And while John Wayne (David James Elliott) is initially portrayed as the villain of the piece, he is given a moment with Robinson midway to demonstrate that he’s not a monster.   But these are just moments along the way – the overall thrust of the movie is still a series of quick snapshots, when what was needed was a closer examination.

SPOILERS CONTINUE: To be fair to the movie, there are several great scenes to be found here and there. Helen Mirren steals nearly every one of her scenes as Hedda Hopper, clearly taking pleasure in ruining all these people’s lives.   John Goodman nearly steals the movie with one scene involving Dan Bakkedahl and a baseball bat that is worth the price of admission by itself. (I’d even put it on par with the fun scene with Robert DeNiro in The Untouchables.)   Bryan Cranston exudes quiet authority, even when just sitting in a bathtub.   But these pieces are not enough on their own to redeem the whole movie. In the final analysis, we’re looking at a similar problem to that which plagued the 2013 Jobs movie: the filmmakers were simply not capable of telling the complete story here.   And unfortunately, this isn’t a situation where Aaron Sorkin is thinking of creating a stronger version in another couple of years. (And even that didn’t work out as well as hoped…)   Trumbo gets points for trying, but in the end, that’s all lit is – a good try.

The Blu-ray of Trumbo is being released this week on February 16th. The packaging includes just the Blu-ray edition, with barely 6 minutes of bonus features. Instructions for downloading a digital copy of the movie are included on an insert in the packaging.

Trumbo is presented in a 1080p 1.85:1 AVC transfer (avg 35 mbps) that shows off plenty of period detail in the costumes and locations. There’s a wide variety of places and people on display here, ranging from swanky Hollywood events to airport tarmacs at night. And there’s an inset combination of color footage and black and white material as the Hollywood Ten appear before congress. All of it looks great. This wasn’t a high-end production, but what we have here in the transfer is solid.

Trumbo is presented in an English DTS-HD Master Audio 5.1 mix (avg 3.3 mbps, going up to 4.0 mbps in the big scenes). This isn’t a big or loud mix – most of the sound is in the dialogue coming from the front. But there are occasional atmospherics, and the music fills all the speakers at the appropriate times. This is a movie about dialogue – and that comes through loud and clear. I note there are no foreign language mixes on this disc.

Trumbo comes with very little in the way of special features. No documentary on the blacklist. No commentary from the director where he could have tried to explain himself. No deleted scenes. All we have are two very short featurettes. That’s it. In a sense, the special features here represent just as much of a missed opportunity as the movie itself, which is a sad statement indeed. If I could award only half a star here, I would.

Who is Trumbo? (4:02, 1080p) – This four-minute featurette is the most in-depth of a look we get into the making of this film, and some of it is taken up with clips from the movie! There’s a bit of footage of the real Dalton Trumbo, and a bit of on-set footage to go with several quick soundbites from the cast and producers.   It goes without saying that the featurette doesn’t even really answer its own question in any kind of a satisfying way.

Bryan Cranston Becomes Trumbo  (1:59, 1080p) – For a minute, I thought this featurette was intended as a joke. Two minutes long, some of that taken up with the same clips from the first featurette and even one of the same soundbites from Jay Roach!   There’s a decent compliment from Helen Mirren to Bryan Cranston buried in here, but that’s about all I could find of interest.   There is no reason that this material couldn’t have been included in the first featurette and saved everyone the time.

The film and special features are subtitled in English and Spanish. The usual pop-up menu is present, along with a complete chapter menu.

Trumbo is a nice try toward telling the story of the gifted Hollywood writer, but it simply doesn’t offer enough substance to merit a recommendation. The Blu-ray presents the movie in solid HD picture and sound, but with only the barest minimum of special features.   The Blu-ray thus winds up suffering from the same problem as the movie itself – there’s no there there. 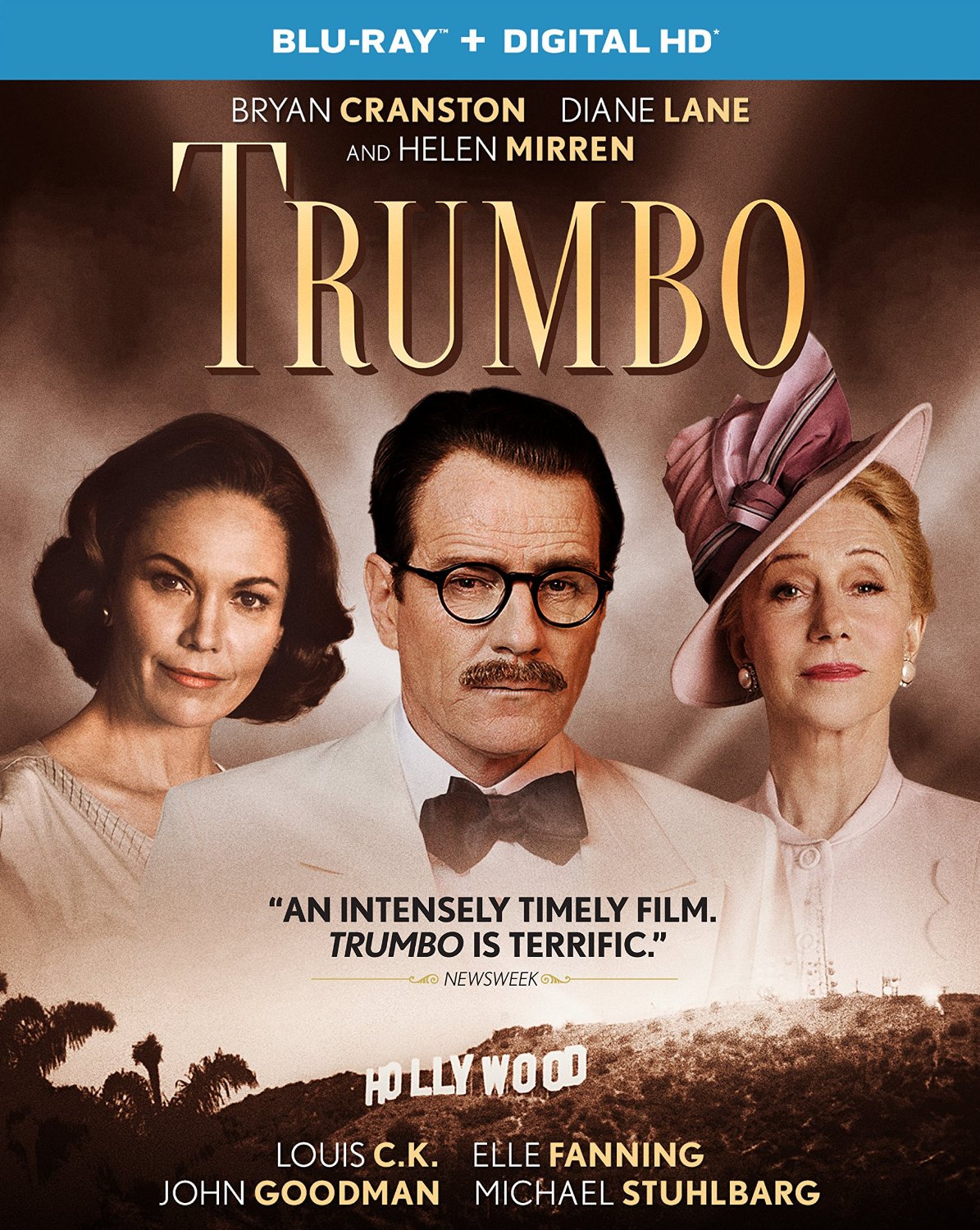