Even if its animated features are sometimes lacking in deep emotional resonance, Dreamworks Animation can usually be counted on to provide a lot of fun in their animated movies, but Trolls, the latest attempt by the studio, sacrifices depth for splashy color, flash, and sparkle offering us a simplistic tale of good versus evil and an even simpler message of happiness being found within us all.

Even if its animated features are sometimes lacking in deep emotional resonance, Dreamworks Animation can usually be counted on to provide a lot of fun in their animated movies, but Trolls, the latest attempt by the studio, sacrifices depth for splashy color, flash, and sparkle offering us a simplistic tale of good versus evil and an even simpler message of happiness being found within us all. There’s less substance here for adults than in almost any other prior Dreamworks CG movie, so despite a raft of lively pop tunes and a clutch of promising characters, Trolls never rises above the mundane.

The carefree, fun-loving Trolls have only one enemy, the Bergen, who feel they can never feel happiness unless they eat a tasty troll during Trollstice, the annual holiday eating celebration for these ogres. When the Bergen Chef (Christine Baranski) allows the trolls in the Troll Tree to escape, King Gristle (John Cleese) banishes her from the kingdom. The Trolls manage to hide safely from the Bergen for twenty years, but a loud anniversary celebration draws Chef’s attention, and she makes off with a handful of the merry creatures forcing Troll Princess Poppy (Anna Kendrick) to go save her friends. She takes with her the only melancholy troll, Branch (Justin Timberlake), who has spent his life studying the Trolls’ sworn enemy and will be invaluable in assisting Poppy find the captured creatures.

So, the Jonathan Aibel-Glenn Berger screenplay is a lackluster search and rescue operation scenario. The two Troll protagonists (one happy, one depressed) make one Bergen friend during their quest, the downtrodden scullery maid Bridget (Zooey Deschanel), and help her attain her goal, to meet and make nice with King Gristle’s son who is now king himself (Christopher Mintz-Plasse). All of the adventures are enveloped by a string of songs and production numbers to either classic pop tunes (“Sounds of Silence,” “Hello,” “Total Eclipse of the Heart”) or new songs written for the movie (including Justin Timberlake’s Oscar-nominated tune “Can’t Stop the Feeling”). The musical numbers are undeniably colorful and fun (Poppy’s “I Will Get Back Up Again,” Bridget’s “I’m Comin’ Out” with some roller boogie sneaked into the dance moves, and “True Colors” when the deflated Trolls finally get their mojo back prove the most outstanding), but they do very obviously serve the purpose of padding out the ultra slim storyline to feature length, and with the lack of real character depth (one troll poops cupcakes; another sprays glitter to heighten everyone’s joy) and the simplistic plot and theme, Trolls winds up as one of the most insubstantial of the Dreamworks Animation efforts.

But that doesn’t mean the voice actors aren’t talented or aren’t having a very good time with these roles. Anna Kendrick has already proven her vocal chops in a couple of recent screen musicals, so her several song numbers as Princess Poppy during the film get very professional handling. Justin Timberlake has probably the most complex character in the cast as the glum Branch (his backstory which explains how happiness was drained from him is explained during the “Total Eclipse of the Heart” number), and the Emmy-winning actor does just fine with it. Christine Baranski gets to overact her head off as the evil, snarling Chef while John Cleese as original king of the Bergens and Jeffrey Tambor as king of the Trolls each gets moments to shine. Among the famous names among the Troll captured are James Corden’s roly-poly Biggie, Russell Brand’s sneaky Creek, and Gwen Stefani’s Suki, but none of them make as delightful an impression as co-director Walt Dohrn’s couple of appearances as Cloud Guy, a wacky, fun-loving cloud with a delightful sense of humor.

The film’s theatrical 2.35:1 aspect ratio is faithfully rendered in this 2160p transfer using the HEVC codec. It goes without saying that sharpness is exemplary with the fuzzy surfaces of the Trolls quite palpable and that the wide, wide color gamut of UHD is put to the ultimate test with the film’s succession of day-glo colors. HDR has been judiciously used so that the film isn’t blindingly bright or contrast overtly hot. The movie has been divided into 24 chapters.

Of course, Trolls was offered in theaters in 3D, but no 3D disc is being offered here. While the UHD image offers outstanding clarity and depth of field with its measured use of HDR, it’s not quite compensation enough for the loss of a 3D release.

The Dolby Atmos sound mix (decoded to the Dolby TrueHD 7.1 core on my equipment) makes amazing use of the wide soundstage not only for the lengthy succession of musical numbers in the movie but for other judicious use of the available channels for things like echoes and ambient sounds in this unusual world. Dialogue has been expertly recorded and has been placed mostly in the center channel.

Party Mode: in addition to the sing along mode which is also selectable, this also includes more interactive features throughout the movie using the colored buttons on the remote.

Travel Through Troll Village (4:43, HD): Cloud Guy (Walt Dohrn) takes us on a tour of the Troll Village and introduces us to some of the town’s leading citizens.

The Potion for Stop-Motion (5:06, HD): visual artist Priscilla Wong explains the process of her creation of Poppy’s scrapbook used as motifs in several different places in the movie.

Inside the Bunker (2:54, HD): Cloud Guy gives us a tour of Branch’s underground lair where he can remain safe from the Bergen.

Trolls is one of the lesser Dreamworks Animation features, a juvenile musical comedy with simplistic characters and themes which is certainly family friendly but which won’t offer much for the older generation. Still, the UHD version offers exemplary picture and sound for a room-filling experience for those interested. 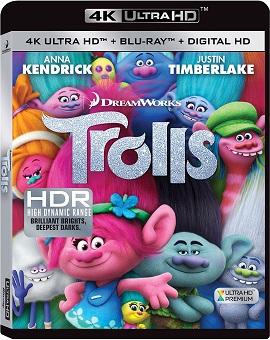