Forum List What's new Dark Style Change width
Log in Register
What's new Search
Menu
Log in
Register
Navigation
Install the app
More options
Dark Style
Close Menu
Posted on January 10, 2021 by t1g3r5fan
You are using an out of date browser. It may not display this or other websites correctly.
You should upgrade or use an alternative browser.
Sci-Fi cult favorite gets the Limited Edition treatment 4.5 Stars

In the 1950’s, Universal had churned out science films by the handful each year; among the notable films – some of which have become classics of the genre – were It Came from Outer Space (1953), Creature from the Black Lagoon (1954), This Island Earth (1955) and The Incredible Shrinking Man (1957). Coming in at the conjunction between the end of the 1980’s and the start of the 1990’s, Tremors harkened back to those golden days of Universal sci-fi. Previously available on DVD and Blu-ray, Arrow has licensed the film for a Limited Edition release.

Located just to the east of the Sierra Nevada mountains, the tiny town of Perfection – population 14 – seems like the ideal place to truly get away from it all. However, handymen Valentine “Val” McKee (Kevin Bacon) and Earl Bassett (Fred Ward) are at their wit’s end living here and plan to leave for the nearby town of Bixby to find work. Soon, they’ll learn that they’re leaving a day too late; a new and dangerous species of wormlike creatures called Graboids are starting to turn Perfection into a smorgasbord of unsuspecting victims, both human and animal alike. Together with a graduate student and a local survivalist, Val and Earl will now have to fight the Graboids in order to live to even see tomorrow…

A throwback to the days of classic 1950’s creature features, Tremors brings that sensibility while adding a few new twists to the formula. While it’s not a complete comedy, the movie does have a refreshing sense of humor that plays well with the mix of horror and science fiction elements. Also, as one of the last movies to feature a complete use of practical special effects before Jurassic Park (1993) changed the game in creature features, the film deploys the array of effects work in a completely convincing fashion that one can forget that in some key scenes, like one of the Graboids burrowing into the Gummer’s basement. Best of all, the spirited performances and overall buoyant pace and timing makes this a fully enjoyable romp all the way. As one of the last old school styled monster movies (made with a modern sensibility), Tremors has crawled its way – pun intended – into cult status, spawning a series of direct-to-video sequels and a TV series while growing a devoted fanbase at the same time.

Coming at a career crossroads following a couple of box office misfires, Kevin Bacon revitalized his career with a great performance as Val; he would follow this up with appearances in Oliver Stone’s JFK (1991) and Rob Reiner’s A Few Good Men (1992) – quite the 180 degree turnaround from this, huh? As Val’s handyman partner and friend Earl, Fred Ward also has one of his best roles here; he would reprise the role in the first sequel of the franchise Tremors 2: Aftershocks (1996). Brilliantly cast against type here following his run on TV in Family Ties, Michael Gross has a career defining performance as the eccentric Burt Gummer (which he has reprised in every film in the Tremors franchise so far); Country music superstar Reba McEntire makes her film debut here as Burt’s wife, equally adept with the seemingly limitless ammunition they keep stockpiled in their basement. Rounding out the cast here are Finn Carter as the graduate student Rhonda LeBeck, Victor Wong as the general store owner Walter Chang, Conrad Bachmann and Bibi Besch as the town’s doctor and his wife who become victims of the Graboids, Robert Jayne (credited here as Bobby Jacoby) as the smart aleck Melvin, Charlotte Stewart and Ariana Richards as -respectively – pottery maker Nancy and her pogo stick obsessed daughter Mindy, John Goodwin and John Pappas as a pair of unlucky roadworkers and Sunshine Parker in a brief appearance as the ill fated town drunk Edgar Deems.

The film is presented in its original 1:85:1 aspect ratio for this release, taken from a brand new 4K restoration of the original camera negative approved by director Ron Underwood and cinematographer Alexander Gruszynski. Colors are faithfully represented, along with organic film grain and an equally faithful representation of fine details; there’s minimal to no cases of scratches, tears, dirt or dust present here. Overall, this is likely the best the movie will ever look on home video and an easy improvement over the previous Universal Blu-ray.

There are three audio options for this release: a 2.0 DTS-HD Master Audio track (representing the original theatrical stereo), a 4.0 DTS-HD surround track and a remixed 5.1 DTS-HD Master Audio track. On each, dialogue, sound effects and music score (composed by Ernest Troost and an uncredited Robert Folk) are each given faithful representations, strength and clarity without intruding upon each other; there’s minimal to no instances of distortion, crackling or hissing present here. Again, this is likely the best the movie will ever sound on home video and another improvement over the Universal Blu-ray.

Commentary by director Ron Underwood, producer Brent Maddock and co-writer S.S. Wilson – Newly recorded for this release, the trio talk about their memories about making the film.

Commentary by author Jonathan Melville – Also recorded for this release, Melville talks a little bit about the film’s production history and some of the themes; some of the info overlaps with the previous commentary.

Making Perfection (31:07) – This new documentary on the film looks back on the production and the franchise it spawned; among those interviewed include actors Kevin Bacon, Michael Gross, director Underwood, producer Maddock, co-writer Wilson, actress Ariana Richards and production designer Ivo Cristante, just to name a few.

The Truth About Tremors (22:02) – Co-producer Nancy Roberts talks about the movie’s journey from concept to filming in this brand new interview.

Bad Vibrations (10:47) – This brief new interview has cinematographer Alexander Gruszynski talking about some of the details from lighting and shooting the movie.

Aftershocks and Other Rumblings (12:38) – Associate producer Ellen Collett shares some of the stories from behind the scenes of making the movie in this new interview.

Digging in the Dirt (21:00) – This new featurette goes into the detail with a few of the members of the special effects crew (including Robert Skotak) on how the practical effects for the movie were created and executed.

Music for Graboids (13:35) – This visual essay featuring audio interviews with composers Ernest Troost and Robert Folk goes over the music for the movie, including an unused cue by Troost in the final cut.

Pardon My French! (16:17) – A compilation of scenes from the edited for network TV cut of the movie featuring the overdubs; the theatrical scenes are also shown in comparison.

Creature Featurette (10:24) – A compilation of on set camcorder footage showcasing the making of the Graboids.

Deleted Scenes (5:02) – Four scenes cut from the film are presented here, including the original opening scene.

Trailers – There are two theatrical trailers for the original film: one featuring voiceover narration by Don LaFontaine (1:58) and the other featuring Jerry Lee Lewis’ “Whole Lotta Shakin’ Goin’ On” in the soundtrack (1:55). There’s also a trailer gallery for each of the sequels in the franchise, with the option of playing them separately or as a whole (6:34). Finally, there’s a VHS promo (1:19), three TV spots (1:23) and 8 radio spots (4:21).

ArcLight Hollywood 2015 Q&A (1:11:11) – Although not listed on the packaging, this is taken from footage shot by Melville from the screening of the movie with the Q&A session taking place both before and after the film; those cast and crew members in attendance included some of those previously mentioned here in addition to Finn Carter, Conrad Bachmann, Robert Jayne and Charlotte Stewart.

Gag Reel (9:54) – Rare outtakes from the production, playable by itself or with an introduction an select commentary by Wilson (10:48).

Although a victim of the box office doldrums (despite some decent critical notices), Tremors has enjoyed a great second life as a cult favorite due to home video and TV airings and also unleashed no less than six sequels/prequels and a short lived TV series. Arrow may have just delivered the definitive Blu-ray edition of the movie (there’s also a 4K UHD Blu-ray concurrently released by Arrow as well), with a superb HD transfer as well as a wealth of special features, including archival featurettes and rarely seen outtake footage in addition to rarely seen early short films by the filmmakers. One of Arrow’s best releases of 2020 comes very highly recommended.

Also, as one of the last movies to feature a complete use of practical special effects before Jurassic Park (1993) changed the game in creature features, the film deploys the array of effects work in a completely convincing fashion that one can forget that in some key scenes, like one of the Graboids burrowing infoto the Gummer’s basement
Click to expand...

This sentence confuses me. Are you saying the viewer can forget it’s not cgi?

Otherwise a nice review. I have thoroughly enjoyed Arrow’s new release. And the extras on are on the 4K disc!

Johnny Angell said:
This sentence confuses me. Are you saying the viewer can forget it’s not cgi?

Otherwise a nice review. I have thoroughly enjoyed Arrow’s new release. And the extras on are on the 4K disc!
Click to expand...

t1g3r5fan said:
I was trying to say that the practical effects (miniatures and such) are so well done that one can forget that they were employed in the movie. That's what I was trying to say.
Click to expand...

And well done miniatures are far superior to any CGI- just look to the original Star Wars trilogy and Blade Runner among many others.
The Criterion release of Three Fantastic Journeys by Karel Zeman will totally convince you if not the above.

noel aguirre said:
The Criterion release of Three Fantastic Journeys by Karel Zeman will totally convince you if not the above.
Click to expand...

I should know; I reviewed that set last year!

Nice review Mychal.... I haven't seen the film for quite some time. Anyway, I was hoping you would've noted which audio track you liked the best and why. Do you think the film watching experience would have benefitted much with an Atmos mix or DTS-X mix... curious of your thoughts....

JimJasper said:
Nice review Mychal.... I haven't seen the film for quite some time. Anyway, I was hoping you would've noted which audio track you liked the best and why. Do you think the film watching experience would have benefitted much with an Atmos mix or DTS-X mix... curious of your thoughts....

My preference was for the 4.0 DTS track, as it was the most immersive on my home theater system, in my personal opinion.
You must log in or register to reply here. 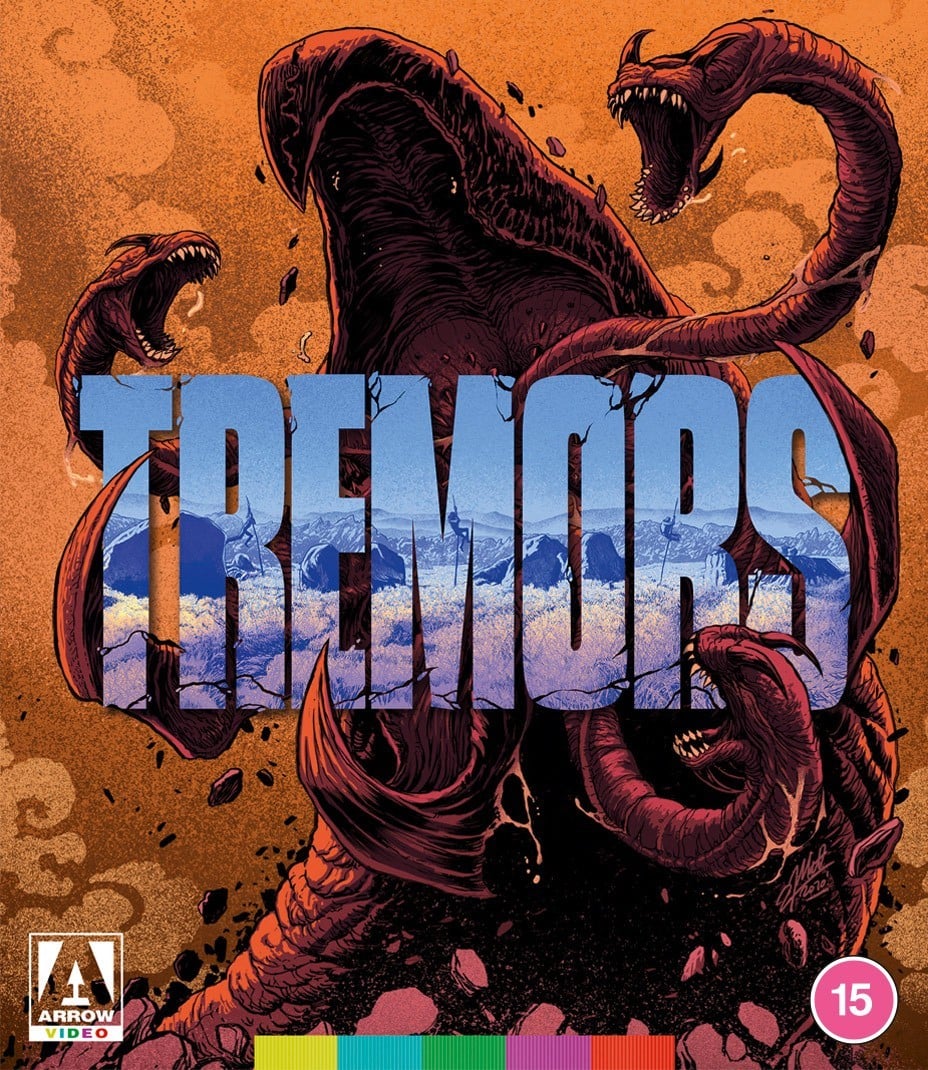