One of the grandest of adventure tales, Robert Louis Stevenson’s Treasure Island has been brought to the screen quite a few times, but Byron Haskin’s 1950 version made under the auspices of Walt Disney remains among the best ever.

One of the grandest of adventure tales, Robert Louis Stevenson’s Treasure Island has been brought to the screen quite a few times, but Byron Haskin’s 1950 version made under the auspices of Walt Disney remains among the best ever. True to the spirit if not the letter of the book, Treasure Island is bold, colorful, and alive with the spirit of youthful exuberance, and this Technicolor version of the story has easily stood the test of time.

Young Jim Hawkins (Bobby Driscoll) comes into the possession of a pirate treasure map when Captain Billy Bones (Finlay Currie) dies while staying at Jim’s family inn. Sharing his find with Squire Trelawney (Walter Fitzgerald), the talkative squire at once goes to Bristol to secure a ship and crew for the journey on the assurance that a treasure worth almost a million pounds awaits them at journey’s end. The captain hired to get them there, Smollett (Basil Sydney), is taking far too long to sign up a trustworthy crew, and local cook John Silver (Robert Newton) assures Trelawney he can round up a crew that once sailed with the legendary Captain Hawk and be ready to sail at sunset. Silver’s “crew,” of course, is his pirate band who actually had sailed under the legendary cutthroat Captain Flint, but they’ve been instructed to lay low until they reach the island where they can take over the vessel, steal the map, and grab the treasure for themselves.

Robert Louis Stevenson’s great adventure yarn has received a surprisingly faithful adaptation by Lawrence E. Watkin with only some minor alterations from the novel’s beginning (we never see Jim’s mother in this version although she’s spoken of) and concluding chapters and with a few new characters that have been added to fill out the band of buccaneers. For newcomers, you may be surprised at the violence quotient of the movie: people get shot in the face and sliced across their torsos, and Jim sustains a very painful knife wound that doesn’t lack for blood, all pretty graphic for 1950. All of the memorable characters from the story are here even if in sometimes slightly reduced roles: Black Dog, Blind Pew, Billy Bones, the kindly Doctor Livesy, Israel Hands, Squire Trelawney, Ben Gunn, Captain Smollett, and, of course, one of the most famous pirates in all of literature, Long John Silver. The adventures are all present and accounted for, too: Jim’s overhearing the pirates’ planning while secreted in the apple barrel, the attack on the garrison, Jim’s face-off with Israel Hands, the rescuing of the Hispaniola, the weird initial encounter with Ben Gunn, and the frantic race for the gold aided by a ghastly skeleton pointing the way: all pulled straight from the novel. Director Byron Haskin keeps things moving at a merry clip making the scenes exciting and unpredictable for those who hadn’t previously read the book before seeing the movie.

Bobby Driscoll was fresh from his Oscar-winning performance in The Window when he was tapped to play Jim Hawkins, but this most American of child actors, while giving a very effective performance full of pluck and drive, makes no attempt at an English accent and surrounded by a complete cast of Britishers, he does seem a bit out of place (just as he would as the Americanized Peter Pan in Disney’s smash hit animated tale three years later). But there is no denying the tremendous camaraderie between Driscoll and the unforgettable Robert Newton as the definitive Long John Silver, perhaps the greatest performance in his long and distinguished career. Walter Fitzgerald is loads of fun as the sputtering, pompous Squire Trelawney, and Denis O’Dea brings a steady hand and considerable subdued authority as Doctor Livesy. Finlay Currie has only one great scene as the dying Billy Bones, but he’s most effective, and the other pirates played by Ralph Truman, Geoffrey Keen, John Laurie, and Francis De Wolff are equally fine. You’ll never forget the eccentric Geoffrey Wilkinson as Ben Gunn either, cackling madly and scampering about as the marooned pirate who holds some major secrets about the island and its riches.

The film’s 1.37:1 original aspect ratio is faithfully rendered in this 1080p transfer using the AVC codec. Sharpness is superb throughout with facial features, hair textures, and clothes all highly detailed in this encode. Color is warm and rich, perhaps a shade on the brown side in skin tones but with the ruddy complexions of the pirates seemingly realistic. Contrast has been consistently applied for a sterling picture, and black levels are also deep and true. No age-related problems with scratches or debris are present. The movie has been divided into 12 chapters.

The Dolby Digital 2.0 sound mix is decoded by Dolby Prologic into the center channel. While the dialogue, sound effects, and Clifton Parker’s background score are all professionally combined without any aspect overshadowing the other, there are on occasion some age-related artifacts which haven’t been completely eliminated. Some quiet hiss and a bit of noise can be heard during softer passages of the movie though these are not major intrusions into one’s enjoyment of the film.

Disappointingly for a disc labeled the 65th Anniversary Edition, there are no bonus features included with this edition of Treasure Island, a shame given the quality and classic nature of this project.

A genuine classic in every regard, the Walt Disney 1950 version of Treasure Island is an adventure tale all film lovers should really enjoy, and the video quality of this Blu-ray release is exemplary. This movie is offered as part of the Disney Movie Club (www.DisneyMovieClub.com) though you can certainly find it offered for sale with varying premium prices at Amazon (see below) and through other marketplace sellers. 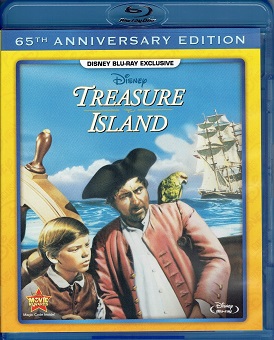