Flicker Alley has released Richard Fleischer’s early crime/noir melodrama Trapped.  First released by Eagle-Lion in 1949 the original negative is long lost.  Thanks to a private collector along with The Harvard Film Archive and The Film Noir Foundation Trapped has been restored by UCLA, rescuing the film from public domain hell.  Trapped is an exciting example of post-war docu-noir with plenty of late 1940s Los Angeles location work.

Trapped is a perfect title for a noir; kind of sums of the genre in one word.  It’s part of Eagle-Lion’s series of low budget, well-made crime/noir films from the late 1940s that include He Walked by Night, Raw Deal (another noir great title), and T-Men.  In fact, Trapped most resembles Anthony Mann’s T-Men from 1947.  Both films deal with government agents tracking down counterfeiters.

Trapped opens with a short five-minute mini-documentary about the jurisdiction of the US Treasury Department and how paper money is printed.  This is concise, informative and very well done.  Once the film proper opens we see a restaurant owner depositing cash at a bank only to learn that one of the 20-dollar bills is a fake.  The bill is confiscated, and the woman is not reimbursed.

The feds quickly track the bill to a set of plates that were used by the now-imprisoned, Tris Stewart (Lloyd Bridges).  To track the plates the feds, offer Tris time off of his sentence if he plays ball.  At first, he demurs, saying he isn’t a stool pigeon.  But quicker than you can say fade out, fade in he’s on a bus taking him to Kansas City.

Meanwhile, Tris’ girlfriend Meg Dixon (Barbara Payton) has moved to Los Angeles where she is working as a nightclub cigarette girl under an assumed name.  Meg is being tailed by undercover agent John Downey (John Hoyt) posing as Johnny Hackett, a seemingly loaded, aging wolf.

Tris double-crosses the feds, escapes, and heads to Los Angles.  His plan is to get back the plates from his ex-partner Sam Hooker (Douglas Spencer) and head to Mexico with Meg where he can resume business.

Naturally, things don’t go as planned as Tris learns that Sam has sold the plates to settle gambling debts to one of their distributors, Jack Sylvester (James Todd). Tris tracks Sylvester down and the two make a deal that for $25,000 real money Tris will receive $250,000 in counterfeit money.  How will Tris come up with the money?

On loan from RKO, Trapped was up and coming director Richard Fleischer’s eighth feature.  Fleischer was a remarkably versatile director and worked in almost every genre successfully.  I haven’t seen Doctor Doolittle since it came out, but in spite of its reputation, I would be curious.  It’s not everyone who can go from 20,000 Leagues Under the Sea to Violent Saturday, The Vikings to Compulsion, Doctor Doolittle to The Boston Strangler, from The New Centurions to Soylent Green, and from Mr. Majestyk to Mandingo.

In a career spanning over 40 years, Fleischer directed a lot of good movies with, until the last few years, few out and out clunkers.

Trapped isn’t in the same league as Fleischer’s later crime/noir films.  It isn’t quite as good as the Anthony Mann Eagle-Lion crime films, but it’s still fun and moves along quickly.

The script by frequent Fleischer collaborator Earl Fenton (Armored Car Robbery, The Narrow Margin, 20,000 Leagues Under the Sea, and Bandido!) and George Zukerman (Border Incident, 99 River Street, Taza, Son of Cochise, Written on the Wind, and The Tarnished Angels) has snappy dialogue but is a little strange structurally.  If you haven’t seen Trapped yet, you might want to stop reading now.

The problem is that Tris is arrested and disappears for the last reel of the film.  The exciting and well-staged set piece at the end of the movie has agents chasing Sylvester into a trolley car depot.  While it is exciting, it is unsatisfying as Sylvester is an oily, sniveling character, almost a comic villain who is a supporting character while Tris is a dangerous psychopath that the film had until the climax, focused on.  Alan Rode and Julie Kirgo point this out in their commentary and their guess is that Lloyd Bridges was due on another project and unable to film the climax and Fleischer and crew had to improvise the ending.

Lloyd Bridges is wonderful and if you only know him from his television work, he is genuinely threatening as the volatile Tris.  At this point in his career Bridges is something of a journeyman actor working a lot in a wide variety of roles.  Trapped and Cy Endfield’s Sound of Fury (Try and Get Me) are revelations.  It is around this time that Bridges was sucked into the communist witch hunts.  Who knows what effect this had on his film career?

Barbara Payton plays Meg in her first starring role.  Rode and Kirgo spend a lot of time discussing Payton’s sad personal life.  Payton’s life plays like an exploitation movie.  Payton is good as Meg.  She is sometimes a bit inexperienced delivering dialogue but, as Kirgo points out, she is very good at reacting – a natural.

The pairing of Tris and Meg is like an unromantic version of Gun Crazy or Bonnie and Clyde.  The physical attraction between Tris and Meg is obvious. You would have to be a corpse to not find them physically attractive.  The two are fated to be together.  The two are trapped due to their overpowering physical attraction.  Because of the weird ending, Meg pays a much higher price for a character who doesn’t actually break the law.  Her only crime is loving a small-time thug.

The rest of the cast is fine.  John Hoyt does a good job playing against type as an undercover cop essentially playing two roles.  Douglas Spencer is really effective as the pathetic Sam.  The scene between Tris and Sam is scary and sad.  Like Rode and Kirgo, I also loved James Todd as Sylvester.  Todd didn’t have much of a career but is wonderful as a slippery, amoral behind-the-scenes criminal; too concerned with his grooming and too weaselly to do his own dirty work.

Trapped looks very good, but not perfect.  UCLA has done their usual good job working with a 35mm acetate print.  There are scratches, nicks, and gate weave present.  I would guess that these are due to restoration budgetary constraints.  Cinematographer Guy Roe (Railroaded!, A Scandal in Paris, Armored Car Robbery, The Sound of Fury) does a nice job with both location and studio work.  Roe was in the camera department at Paramount in the 1930s and worked on movies directed by Lubitsch, DeMille, Sturges among others.  He was the cameraman on the American footage of Godzilla.  Which I’ve always thought was far better done than one would expect.  Roe finished his career in television

The audio is also good.  Dialogue and sound effects are clear.  Sol Kaplan’s score is effective as he has to create several types of moods for the movie.  Kaplan worked on projects ranging from projects as diverse as The Halls of Montezuma, Niagara, The Spy Who Came in From the Cold to the original Star Trek television show.

An audio commentary by Alan K. Rode and Julie Kirgo.  This is a light and informal discussion of the film and genre.  They discuss several elements of the film including the career of Fleischer (who they claim doesn’t even mention the film in his autobiography), screenwriter Felton, actor Bridges, and particularly Payton.  The two sound like friends talking over pizza after a screening.

A video piece Feeling Trapped, about the making and restoration of Trapped.  In this piece, we learn that the movie was filmed for under 200 grand in under a month.  Muller offers illness as a potential reason for the film’s ending.  I’m inclined to go with Rode and Kirgo’s theory about availability/scheduling because of how neatly Tris is dispensed with.  Bridges is in those scenes.  Did the script have him escaping from jail for the climax?  It would be nice if somebody could track down the shooting script and schedule – maybe this would shed some light.

Another video piece A Sedulous Cinderella: Richard Fleischer Remembered.  This is an interview with Mark Fleischer, the director’s son.

A restored Trapped is a welcome addition to blu ray.  It’s not peak noir or Fleischer for that matter, but it is definitely above average.  Presentation is crucial for all movies, but particularly movies like a low-budgeted minor gem such as Trapped.  If seen in an inferior public domain copy it would be easy to mistakenly think the filmmakers, particularly the DP didn’t know what they were doing.  These were talented craftspeople who did know what they were doing and were doing fine work, as this edition shows.  Flicker Alley and particularly The Film Noir Foundation is to be applauded and supported for bringing such neglected films to the market in such good shape. 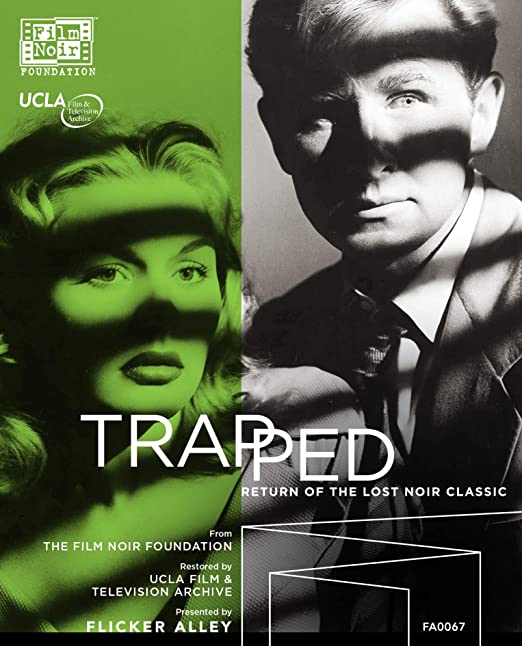