Forum List What's new Dark Style Change width
Log in Register
What's new Search
Menu
Log in
Register
Navigation
Install the app
More options
Dark Style
Close Menu
Posted on September 26, 2017 by Todd Erwin
You are using an out of date browser. It may not display this or other websites correctly.
You should upgrade or use an alternative browser.
Feast for eyes and ears and nothing more 3.5 Stars

Transformers: The Last Knight is a bloated and over-stuffed feast for the eyes and ears, but a complete  waste of a movie. In other words, a typical Michael Bay film.

I recently completed watching your latest film, Transformers: The Last Knight. While I thank you that you did not subject us to Shia LaBeouf again, this latest entry did not do your leading man, Mark Wahlberg as Cade Yeager, any favors, as he breezes through the story with little effort. What happened to Cade’s daughter? Oh, that’s right, Cade is hiding out in the largest auto junkyard outside of Chicago (but looks like the Arizona desert) with his Autobot pals Bumblebee, Hound (John Goodman), Drift (Ken Watanabe), Crosshairs (Tom Kenny), Daytrader (Steve Buscemi), and Grimlock, all fugitives since Transformers have been deemed illegal on Earth at the conclusion of the previous entry, Age of Extinction. Because he’s a fugitive, if he tries to speak with her, voice recognition will give away his whereabouts to the TRF (Transformers Reaction Force) and will take him into custody and retire his robot pals. Yeah, right. The TRF, led by Santos (Santiago Cabrera), is on a mission to find Cade before Megatron (Frank Welker) does. It was nice to see Josh Duhamel’s character William Lennox receive a promotion to Colonel, and good to see he is somewhat conflicted with the TRF and his superiors wanting to eliminate all Transformers rather than find out why they keep landing on our planet, despite their leader, Optimus Prime (Peter Cullen), has left to find his creator, Quintessa (Gemma Chan), who brainwashes him into destroying Earth so Cybertron can be healed. Except that why does Optimus disappear for almost two hours? Oh, that’s right, we need to be introduced to more plot and characters, such as Anthony Hopkins as Sir Edmund Burton, the caretaker of Transformers lore at a remote mansion or castle outside of London where he is assisted by a humanoid Transformer (?) named Cogman (Jim Carter). They enlist Cade, who apparently is a descendant of King Arthur and has been entrusted with a Talisman that provides him with armor and a sword, and Vivian Wembley (Laura Haddock) who is the last remaining descendant of Merlin and the only one who can use the long lost staff that the Transformers entrusted him with in order to save the Earth from destruction.

I’m fairly certain there is a lot more plot that was divulged during the two and one-half hour running time (not including end credits), but it has apparently slipped my mind. I agree with you, shooting in IMAX is pretty cool, but you should have decided on one and only one aspect ratio, rather than flipping between 1.9:1, 2.0:1, and 2.39:1. First off, the difference between 1.9 and 2.0 is very minimal, even on the largest of screens, so intercutting was not all that bothersome, especially when nearly 90 percent of the film was in these two formats. However, intercutting between all three with your rapid-fire, ADD-style editing was, at times, nauseating. I’d like to even call into question your choices of selecting shots in 2.39:1, as they do not make much sense. For example, in the conversation between Vivian, Burton, Cogman, and Cade that begins at 1:09:55, nearly all of Vivian’s shots (except one brief reaction) are in the 2.0:1 ratio, while the men are shown almost entirely in the 2.39:1 ratio. There is no artistic reasoning that I can think of behind this, other than to show her cleavage that would have otherwise been cropped in 2.39:1. In films such as Doctor Strange, both Guardians of the Galaxy movies, The Dark Knight, The Dark Knight Rises, and even your own Transformers: Dark of the Moon (to name just a few), the alternating aspect ratios from traditional “scope” to IMAX had been used to give certain shots or sequences added emphasis. In Transformers: The Last Knight, it feels like the few cuts to 2.39:1 are there simply to remind us that we are watching the film in IMAX (or, in this particular case, the IMAX version). Also, did your production design team run out of ideas? Why do most of the military’s weapons and drones look like something out of Star Wars? The scouts look like Imperial Walkers and the drones were very obviously inspired by Darth Vader’s TIE fighter.

Mr. Bay, your previous film, 13 Hours, caused many of your naysayers (both critics and audiences) to call that film your redemption as a director, proving that you can make a more serious and thought driven film. I am a fan of many of your earlier films, including Bad Boys, The Island, the first Transformers, and my all-time favorite of your oeuvre, The Rock. You keep promising us that you will not be making any more Transformers movies, then you go back on your word and make Age of Extinction, and now once again with The Last Knight. Now I’m reading that you have yet again changed your mind and are considering yet another entry somewhere down the road. Please, do all of mankind (and struggling Paramount) a favor – stop making Transformers movies and make more movies in the same vein as The Rock and 13 Hours.

According to IMDB, Transformers: The Last Knight was captured, for the most part, in 6.5K resolution using Arri Alexa and RED Epic Dragon, RED Weapon Dragon, and Red Weapon Helium cameras, then completed as a 2K digital intermediate. The film marks Paramount’s first Dolby Vision HDR release, although my equipment does not support that flavor of high dynamic range. The disc is also compatible with HDR10 (which both my player and TV support), and the results are definite eye candy. Colors are much more vibrant and natural, with more even gradations of colors, particularly in the varying degrees of yellow in Bumblebee and the reds and blues fading into raw metal on Optimus Prime. Contrast is also excellent, with deep blacks that provide high levels of shadow detail. The 2160p upscale also provides a small but noticeable increase in fine detail.

Paramount gives the viewer several audio options, the first and foremost is the Dolby Atmos track that is compatible with Dolby TrueHD 7.1 for those not equipped for object-based audio. This is a very loud and active track (as it should be, this is a Transformers movie) with strong LFE and over-active surrounds that put you dead center in the action. Dialogue is clear and understandable without getting overpowered or lost in the mix. Legacy Dolby Digital 5.1 and 2.0 tracks have also been provided but were not reviewed.

Merging Mythologies (1080p; 19:53):  A look at the writing process and the various mythologies used in the film.

The Royal Treatment: Transformers in the UK (1080p; 27:04): As the title suggests, shooting on location in the United Kingdom.

Motors and Magic (1080p; 14:47): A look at the various Transformers characters and their related vehicles.

One More Giant Effin’ Movie (1080p; 6:45): A very quickly cut together montage of behind the scenes footage, showing the director, Michael Bay, at work.

Digital HD Copy: An insert contains a code to redeem a digital copy from either iTunes or UltraViolet partner Vudu.

OK, I was not a fan of this film, but even fans of this franchise deserved something much better than Transformers: The Last Knight, which may explain the poor box office here in the United States. For those that really enjoyed this movie, the 4K UHD release is probably your best bet in terms of overall picture quality.

Just watched this for the first time and really enjoyed it. Looks fabulous in 4k. Great extras about the making of the film, including the UK locations.

This is on SciFi right now and the flipping between three aspect ratios within the same scene really looks stupid.

RolandL said:
This is on SciFi right now and the flipping between three aspect ratios within the same scene really looks stupid.
Click to expand...

Bay’s use of different aspect ratios is the most random and nonsensical use of that technique I’ve seen to date. I normally love that stuff but in Bay’s movies, he’s somehow found a way to rob it of its effectiveness.

RolandL said:
This is on SciFi right now and the flipping between three aspect ratios within the same scene really looks stupid.
Click to expand...

Josh Steinberg said:
Bay’s use of different aspect ratios is the most random and nonsensical use of that technique I’ve seen to date. I normally love that stuff but in Bay’s movies, he’s somehow found a way to rob it of its effectiveness.
Click to expand...

Completely agree with both of you in this quote from my review:

For example, in the conversation between Vivian, Burton, Cogman, and Cade that begins at 1:09:55, nearly all of Vivian’s shots (except one brief reaction) are in the 2.0:1 ratio, while the men are shown almost entirely in the 2.39:1 ratio. There is no artistic reasoning that I can think of behind this, other than to show her cleavage that would have otherwise been cropped in 2.39:1.
Click to expand...

Todd Erwin said:
Completely agree with both of you in this quote from my review:
Click to expand...

Art and Michael Bay are seldom used in the same sentence without a negative modifier.
You must log in or register to reply here. 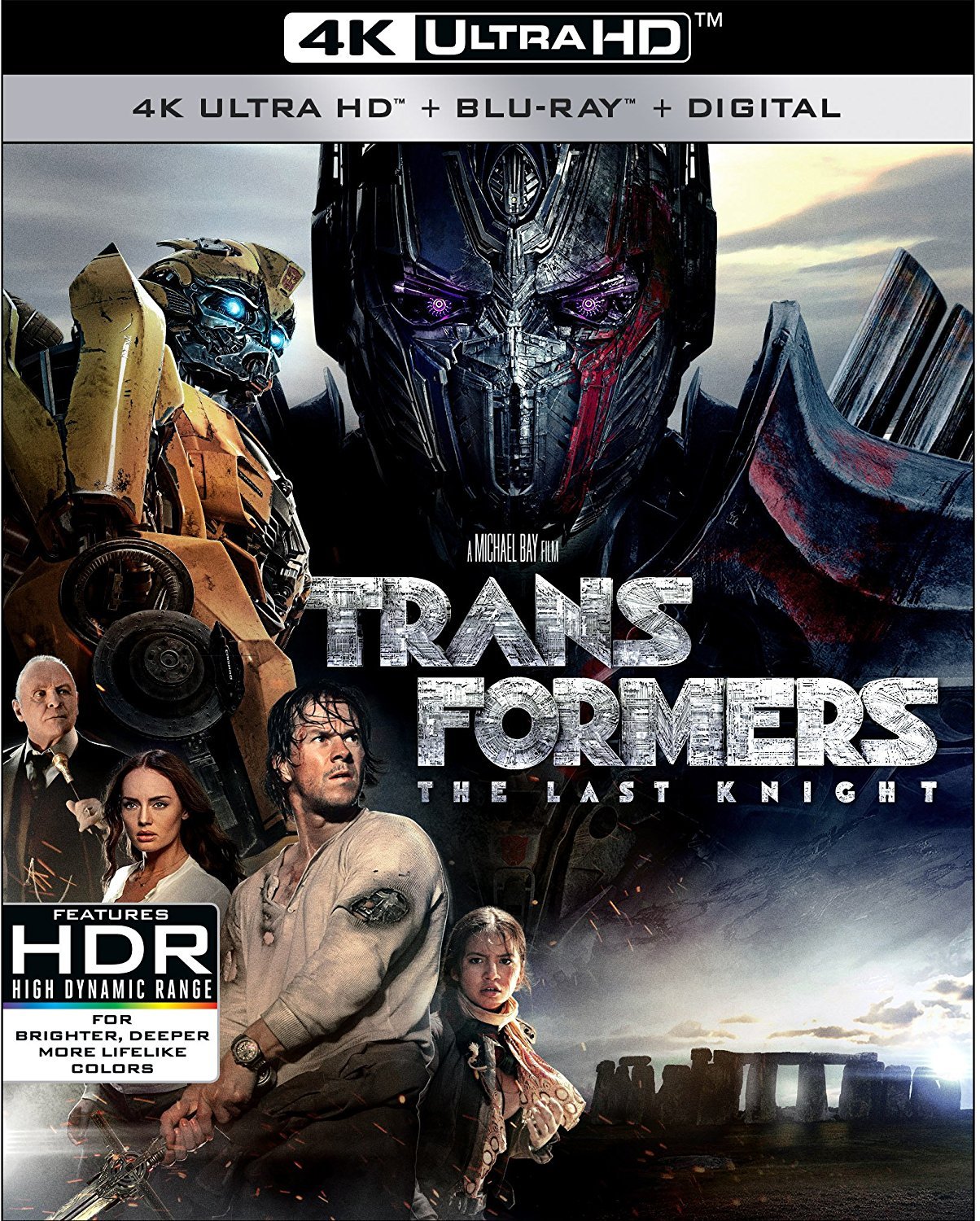