Forum List What's new Dark Style Change width
Log in Register
What's new Search
Menu
Log in
Register
Navigation
Install the app
More options
Dark Style
Close Menu
Posted on January 16, 2019 by Todd Erwin
You are using an out of date browser. It may not display this or other websites correctly.
You should upgrade or use an alternative browser.
Bad case of casting against type 3.5 Stars

The 1991 teen action film Toy Soldiers finally arrives in a widescreen edition on Blu-ray thanks to Sony’s MOD program.

Toy Soldiers is a rather predictable, by the numbers action film in which terrorists take over a boarding school where all the wealthy bad boys are sent after every other boarding school has rejected them. Colombian drug lord Enrique Cali (Jesse Doran) has just been extradited to the United States to stand trial for his many crimes, so his son Luis Cali (Andrew Divoff) along with a crew of mercenaries sneak into the US and take the students of The Regis School for Boys hostage, knowing that the son of the Federal Judge presiding over the trial is enrolled there in hopes of gaining leverage in the release of senior Cali in exchange for the hostages. The judge’s son, Phil Donoghue (Knowl Johnson), happens to hang out with a team of pranksters and ne’er do wells led by Billy Tepper (Sean Astin), and includes Joey Trotta (Wil Wheaton), Hank Giles (T.E Russell), Ricardo Montoya (George Perez), and Jonathan Bradberry (Keith Coogan). This gang of young boys have been caught several times by Dean Edward Parker (Louis Gossett, Jr.) making late night prank calls, skipping class, moving a professor’s office furniture outside in the middle of the quad, and selling bootleg vodka disguised as mouthwash. When Cali and his gang take siege of the school, it is up to this ragtag bunch of “bad boys” to come to the rescue.

The film was largely ignored by audiences and dismissed by most critics upon its original theatrical release, but gained something of a cult status when it was discovered on cable and VHS. Unfortunately, I have to agree with the majority of the critics at the time, as the screenplay by David Koepp (just before hitting it big with his scripts for Death Becomes Her and Jurassic Park) and Daniel Petrie, Jr. (making his directorial debut after his scripts for Beverly Hills Cop, The Big Easy, and Turner & Hooch) doesn’t pack much suspense and a few times doesn’t pay off some of its setups very well. Then there is the casting – sometimes casting against type can work to your advantage, but in Toy Soldiers, it greatly works against the film. I never for a moment believed Sean Astin (The Goonies, Rudy), Wil Wheaton (Stand By Me, Star Trek: The Next Generation), and Keith Coogan (Adventures in Babysitting) as the supposed bad boys that their characters were made out to be. Andrew Divoff is way too over the top as the villain. The only good thing I can say about the casting is Louis Gossett, Jr. as the school dean, who is very believable as he usually is in these kinds of leadership roles.

It may be hard to believe, but Sony’s MOD release of Toy Soldiers on Blu-ray marks the first time the film has been available in its original theatrical aspect ratio of 1.85:1. That is likely justification alone for fans of the film to pick up this release, but wait, it gets better. The presentation is very film-like in its appearance, with noticeable and appreciative film grain throughout that is organic and never distracting. Colors are strong with almost no blooming (the red soccer uniforms come very close to being problematic), and flesh tones are consistent overall. Fine detail is strong, even during some of the darker lit sequences, with deep blacks.

Toy Soldiers has only one audio option – a fairly standard 1990’s era stereo matrixed surround track in DTS-HD Master Audio 2.0. The track features nice stereo separation across the front channels, with dialogue directed mostly to the center channel. Surrounds help to fill the listening space during key action moments (the opening chaos in Colombia is quite convincing) in addition to the score by Robert Folk (The NeverEnding Story II: The Next Chapter).

Fans of Toy Soldiers will likely be quite pleased with this release, a worthy upgrade to the previous pan and scanned DVD. 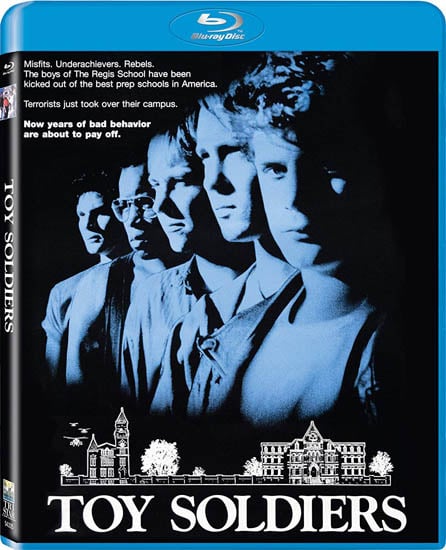