Like watching someone else play the video game, and that is not a compliment. 3 Stars

Warner and MGM’s reboot of Tomb Raider arrives on 4K UHD Blu-ray with a stellar transfer, but the movie is seriously lacking in joy and humor.

Fashioned as a reboot and origin story, 2018’s Tomb Raider stars Alicia Vikander (Ex Machina) as Lara Croft, who at the beginning of the film is working as a bicycle courier and training as a fighter. She has refused to admit that her father, reportedly missing for over seven years, is dead and will not sign the necessary probate papers to access her father’s estate. That all changes when she is arrested after colliding with a police car during a fox hunt chase on her bicycle though the streets of London. Her father’s assistant, Ana Miller (Kristen Scott Thomas), arranges bail and suggests she sign the probate papers in order to save herself from having to go to jail. As she is about to sign, her father’s lawyer, Mr. Yaffe (Derek Jacobi), hands Lara a puzzle he was instructed to give her upon his untimely death. Inside the puzzle is a key and a cryptic note “The first letter from my final destination.” This leads Lara to the family crypt, where the key opens a secret chamber that her father, Richard Croft (Dominic West), used as his secret study, and a videotape instructing her to destroy all evidence he had collected regarding Himiko. Rather than following her father’s instructions, Lara goes through the box, leading her to Hong Kong in search of a man named Lu Ren (Daniel Wu). As it turns out, his father disappeared around the same time as Lara’s, and the two leave on his boat to an uncharted and dangerous island off the coast of Japan, finding themselves shipwrecked then captured by Mathias Vogel (Walton Goggins), who has been hired by an organization known as Trinity to uncover and reclaim Himiko, who was the Queen of Yamatai and thought to have mythical powers over life and death.

Tomb Raider is very promising from the start, but takes a sudden (and unnecessary) shift in tone as soon as Lara and Lu Ren leave Hong Kong. The first forty minutes promises a fun adventure, and Lara has a definite sense of humor and humility about her. It is as if the open seas suddenly sucked the joy and fun from the soul of this movie, because the remaining 80 minutes are a slog to get through, with the final climax being, well, anti-climatic. I usually try to shy away from spoilers, but as we find out in the last 30 minutes, Himiko doesn’t have mythical powers, she has a highly contagious and fast-acting form of leprosy. Director Roar Uthaug not only takes this film way too seriously, but all too often the action sequences feel like one is watching someone else play the video game this movie is based upon. There is a lot of talent on display here, but they are all at the mercy of an insipid screenplay that just meanders to the point of shear boredom. The real delight was seeing Nick Frost in an uncredited cameo as Max the pawn broker. You will definitely want to revisit the original Angelina Jolie Tomb Raider films after viewing this turkey.

Tomb Raider was captured at 3.4K resolution using Arri Alexa Mini and SXT camera, then completed as a 4K digital intermediate with Dolby Vision high dynamic range. Warner’s 4K UHD Blu-ray presents the movie in 2160p resolution, retaining the theatrical aspect ratio of 2.39:1, with both Dolby Vision and HDR10 high dynamic range. Viewing Tomb Raider on HDR10 capable equipment, colors are very natural and vivid, especially once we get to the island of Yamatai. Detail is exceptional, from the very fine textures of the parchment that Richard Croft’s will is typed on to fabrics, skin textures, etc. Contrast is also very good, offering deep blacks with excellent shadow detail.

I continually find it rather odd that so many of Warner’s UHD Blu-rays default with a redundant DTS-HD Master Audio 5.1 track while the accompanying Blu-ray defaults with Dolby Atmos. The Atmos track offered here is very good, providing a nice, spacious soundstage that one usually expects in an object-based mix. Heights are used to good effect during some of the key action sequences, with active surrounds throughout. LFE is strong without being overbearing. Dialogue is clear and understandable throughout.

The UHD disc contains no extras whatsoever (no real surprise), with all of the extras appearing on the included Blu-ray edition.

Croft Training (1080p; 6:06): A brief look at the training Alicia Vikander underwent for her role as Lara Croft.

Breaking Down the Rapids (1080p; 5:34): A brief look at creating the river rapids sequence,

Lara Croft: Evolution of an Icon (1080p; 9:53): A look at the Tomb Raider franchise, from the early video games, to the 2013 game reboot, to the current movie. No mention of the Angelina Jolie movies, though….

Digital Copy: An insert contains a code to redeem a digital copy through UltraViolet. I redeemed my code per the instructions included on the insert and was granted a UHD copy on Vudu, but only SD on FandangoNow. I have contacted FandangoNow for further details.

Tomb Raider looks and sounds great in UHD, but I found the movie to be a major disappointment.

I missed this in theaters but my wife was able to see it - her reaction was very similar to yours, that it was technically well made but not as fun as it should have been. Seeing this wasn't a high priority for me but given her response and now your review, I don't feel bad about missing it anymore.
Reactions: Osato and dpippel

Josh Steinberg said:
I missed this in theaters but my wife was able to see it - her reaction was very similar to yours, that it was technically well made but not as fun as it should have been. Seeing this wasn't a high priority for me but given her response and now your review, I don't feel bad about missing it anymore.
Click to expand...

Yeah, my wife and I are glad we saw Black Panther instead of this, as those were our two choices for date night back in March.
Reactions: Osato and Josh Steinberg

Josh Steinberg said:
I missed this in theaters but my wife was able to see it - her reaction was very similar to yours, that it was technically well made but not as fun as it should have been. Seeing this wasn't a high priority for me but given her response and now your review, I don't feel bad about missing it anymore.
Click to expand...

It's a disappointing movie. I didn't love the Jolie film, but it had some entertainment value, while this one's a bit of a chore to watch.

Also wasn't impressed by Vikander. She's undeniably talented but she lacked the charisma and strength the part needed.

She just seemed like a little girl too much of the time and wasn't convincing. Granted, I get this is an "origin story", but she felt too insubstantial and not as tough as needed.

It's funny to realize that Jolie was younger in 2001 than Vikander is now! Jolie seemed so much older and more mature as Croft than Vikander!

I have updated the section regarding Digital Copy after redeeming my code this morning. Must be UV due to MGM's involvement in the production.
Reactions: Osato

Let's see. The Jolie movies were basically panned as bad video game films and this one gets panned for actually being serious. The makers of video game movies can't win. They get panned for being stupid and too video game-like or panned for not being campy and stupid enough.
Expand signature
"You bring a horse for me?" "Looks like......looks like we're shy of one horse." "No.......You brought two too many."
You must log in or register to reply here.
Share:
Facebook Twitter Reddit Pinterest Tumblr WhatsApp Email Link 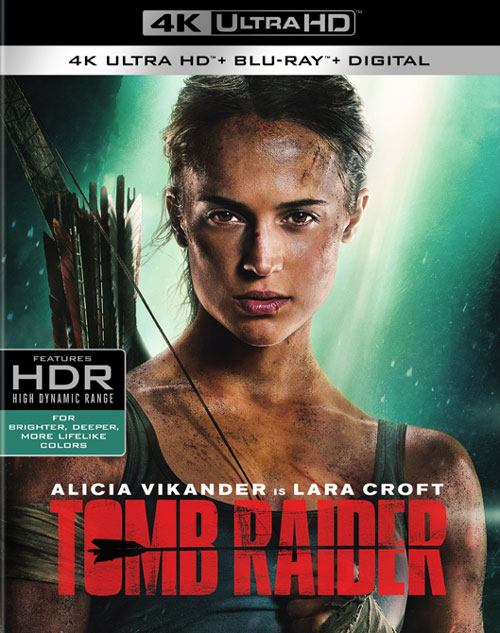