The baby steps necessary to prepare the United States to enter the space race via its NASA Mercury program are recounted in eye-opening detail in Robert D. Webb’s On the Threshold of Space.

The baby steps necessary to prepare the United States to enter the space race via its NASA Mercury program are recounted in eye-opening detail in Robert D. Webb’s On the Threshold of Space. While the film boasts a first-rate cast and many actual test scenarios furnished by the United States Air Force, there’s a fairly weak domestic narrative that weaves its cumbersome way through the really interesting stuff involving tests on the human body to see how it withstands various pressures and sensations that space flight might entail and makes the film a mix of science fact and narrative melodrama.

Leaving his comfortable pediatric practice, Captain Jim Hollenbeck (Guy Madison) enrolls in Air Force training only to emerge as the foremost test pilot in a series of tests aimed to ascertain the body’s resistance and adaptation to the rigors of rapid speeds, descents, and record-breaking ascensions. But Jim is a newlywed, and wife Pat (Virginia Leith), though a scientist herself designing helmets for the various Air Force tests, becomes increasingly uneasy with each new risk that Jim takes in the uncharted domains he and others are experiencing. Though the head of the program Colonel Masters (Walter Coy) is very supportive of Jim’s daredevil nature, Masters’ replacement Major Ward Thomas (John Hodiak) is far more cautious about using humans as guinea pigs in the testing. Their constant differences of opinion about the tests leads Jim to consider leaving the program, a decision that Pat heartily endorses.

Simon Wincelberg and Francis Cockrell have written a really fascinating look at the early experiments in a human’s reaction to the rigors of speed, pressure (which are referred to as wind blast and spin), and thin atmosphere, and the film makes it clear that the experiments we see in dead drops from 20,000 and 55,000 feet, rocket sled launches that reach 2,000 mph, and an ascension in a balloon gondola to 100,000 feet (the film’s climax) are not science fiction. What is fiction, of course, is the threadbare husband and wife drama as Jim thrills with each new discovery and Pat sits on the sidelines knitting furiously while worrying that his next experiment will be his last (though at the start of the marriage, she gave her full consent to his remaining in the program, and she herself is part of the team designing equipment for the men so her attitude is a bit hypocritical). Because Fox has provided a wretched pan-and-scan transfer of the original Cinemascope presentation, the sense of expanse and grandeur at the wild blue yonder where these daring men do their falling and flailing is all but gone in the viewer’s reactions to these thrilling exploits, but it must have been something to see these actual tests in a full widescreen presentation to get some idea of the depths of danger these men experienced in these early tests toward conquering space. There’s even some discussion of a manned scientific experiment station in space courtesy of Dr. Hugh Thornton (Dean Jagger) who intercedes with the overcautious Major Thomas when Captain Hollenbeck eagerly volunteers for the next mission or disobeys orders during a mission for further scientific experimentation.

Guy Madison gives a fine accounting of the courage and curiosity necessary to push the bounds of human knowledge as Captain Hollenbeck, and he’s unquestionably the most charismatic character in the movie. Martin Milner as a fellow tester who lacks Hollenbeck’s bravado and stamina also makes a major impression. As the two different commanders, John Hodiak and Walter Coy couldn’t be more different: the former steely, cautious and demanding and the latter affable, enthusiastic and encouraging. Dean Jagger lends his always firm and knowing presence as the scientist eager to know more while Warren Stevens and Ken Clark play smaller roles as members of the crew with professional ease. Virginia Leith is attractive but fairly bland and predictable as the young wife more interested in preserving her husband’s life than in advancing the realms of science.

The transfer offers us about 2 ½ minutes of the original 2.35:1 aspect ratio in the movie’s pre-credit sequence and main titles after which it segues into the wretched pan and scan 1.33:1 frame which has been outmoded on widescreen televisions for almost twenty years now. With such tampering with the original compositions, characters are split in half or missing visually in scenes where their voices are still heard, and it’s impossible to discuss sharpness (erratic throughout) due to the nature of the process. Color tones and saturation levels are good (reds come through especially well), but there is a fair amount of speckling and occasional debris to additionally mar the presentation. The film has been divided into chapters every ten minutes so this disc contains 10 chapters.

The Dolby Digital 2.0 stereo mix does a pretty fine job handling the original 4 track stereo presentation. Directionalized dialogue is present throughout, and the music score and atmospheric effects have a great deal of hefty fidelity to them (the rocket sled sequence is especially impressive in this mix). Age-related problems with hiss or crackle are not present in the audio transfer.

An antiquated pan and scan transfer obviously spoils a great deal of the majesty and visual oomph of On the Treshold of Space. It seems unlikely fans of the movie will be satisfied with losing almost half of the photographed image as originally presented though the sound does come through nicely on this made-on-demand disc.

And I would have easily bought it in widescreen. What a shame.
Reactions: Peter Apruzzese and Bob Furmanek

Bob Furmanek said:
An ancient pan and scan master of a CinemaScope film released on DVD? Yikes!
Click to expand...

And when we met with Fox last year, they seemed rather ashamed when we expressed displeasure about pan and scan transfers in the 21st century and led me to believe they were going to try their best not to do this any more. Boy, was I fooled!
Reactions: Tony Bensley, Josh Steinberg, Peter Apruzzese and 2 others

And this really is absolutely the kind of movie I love to discover - I love all of that early space age stuff and gladly would have forked my money over blindly on this if it were OAR. Or even if it was an open matte flat film (but I'd probably never admit I did it). But not for a pan and scan version. Sigh. Really really would have loved to have seen it.
Reactions: Tony Bensley
E

I would never watch a pan and scan print. I just sent an email to Starz about doing this on their Western channel.
I got a fairly good reply about bringing this up during an upcoming meeting.Nothing burns me up than starting to watch a widescreen film ,and after the credits it goes Pand Scan !
Expand signature
Former projectionist @ all downtown theatres in Balto. City.Which are all closed. I closed the Tower theatre as the head projectionist, I closed the Mayfair as mgr.

I have the beautiful one sheet but I guess we'll never get the movie, what a shame!
Expand signature
...retired at last...and Ray Harryhausen at my side!!! 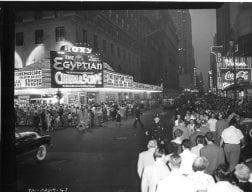 Matt Hough said:
And when we met with Fox last year, they seemed rather ashamed when we expressed displeasure about pan and scan transfers in the 21st century and led me to believe they were going to try their best not to do this any more. Boy, was I fooled!
Click to expand...

It was one of the first titles we licensed from Fox - and then had to give back when we discovered the elements weren't up to snuff!
Expand signature
Twilight Time titles are available for sale exclusively at Twilight Time Movies and Screen Archives
Reactions: Matt Hough and Josh Steinberg

Twilight Time said:
It was one of the first titles we licensed from Fox - and then had to give back when we discovered the elements weren't up to snuff!
Click to expand... 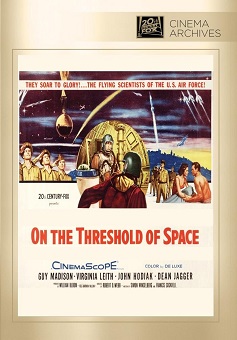