Forum List What's new Dark Style Change width
Log in Register
What's new Search
Menu
Log in
Register
Navigation
Install the app
More options
Dark Style
Close Menu
Posted on May 11, 2019 by Matt Hough
You are using an out of date browser. It may not display this or other websites correctly.
You should upgrade or use an alternative browser.
Sedate romantic trifle from the 1950s comes to Blu-ray. 4 Stars

The visual pleasures of Cinemascope and the aural pleasures of stereophonic sound find a near-perfect match in Jean Negulesco’s light, airy romantic trifle Three Coins in the Fountain.

The visual pleasures of Cinemascope and the aural pleasures of stereophonic sound find a near-perfect match in Jean Negulesco’s light, airy romantic trifle Three Coins in the Fountain. With three photogenic couples lurching their way toward romance amid the splendors of 1950s Rome, Three Coins in the Fountain was among the biggest grossers of its year, and it’s easy to see why with a chart-topping title song and gorgeous widescreen color cinematography to lure patrons into the cinema. Today, the romantic melodrama seems rather thin and underdeveloped, but there is no denying the joys to be found from the magnificent sights and sounds on display.

Newly arrived in Rome from America, Maria Williams (Maggie McNamara) is eager to begin her secretarial duties at the United States Distribution Agency taking over for the departing Anita Hutchins (Jean Peters) who’s on her way back to the States after two years in Rome. She has enjoyed her stay, but the strict dating policies for employees put in place by boss Mr. Burgoyne (Howard St. John) abetted by his waspish wife (Kathryn Givney) have made romance all but impossible. The two girls share the Villa Eden with Frances (Dorothy McGuire), private secretary to noted novelist John Frederick Shadwell (Clifton Webb). And all three women are ripe for love: Frances pining away for her employer of fifteen years, Maria with the dashing playboy Prince Dino di Cessi (Louis Jourdan), and Anita with Italian translator Giorgio Bianchi (Rossano Brazzi) who’s been carrying a torch for her for two years.

John Patrick’s screenplay based on the novel by John H. Secondari follows the tried and true Fox formula of “three girls looking for love” which had been in vogue at Fox all the way back to the 1930s in Three Blind Mice and most recently bringing a big hit to the studio with How to Marry a Millionaire. None of the three tales of the ladies’ romantic adventures get nearly the development to explore the respective characters and their conflicts in depth, and Patrick doesn’t even bother explaining how one couple’s (Anita and Giorgio) problems are even resolved. Instead, the studio and director Jean Negulesco are content to let the astounding beauty of Rome and its environs (with a side trip to Venice for good measure) provide the visual distraction to take our minds away from the screenplay’s narrative lapses. Having directed the previous year’s How to Marry a Millionaire, Negulesco is masterful in getting the most out of the extra-wide Cinemascope frame. A country fete, for example, spreads the picnickers from one end of the frame to the other, and all of those gorgeously colorful landscapes of Italy make the viewer grateful to have extra wide eyefuls of the glories on display especially in a runaway truck sequence which covers a lot of territory.

Clifton Webb as the renowned writer nearing the end of his life gets all of the script’s best catty lines, and Dorothy McGuire, though hardly the old maid she refers to herself as on several occasions, makes a smooth if passionless partner for him. Jean Peters has the least well defined character of the three secretaries, yet her performance actually makes her the most interesting of the three, and one would have liked to see much more of her romantic explorations with Rossano Brazzi’s soulful Giorgio (it’s little wonder David Lean chose him for the male romantic lead in the next year’s wonderful romance Summertime). Despite her Oscar nomination the previous year, Maggie McNamara comes off as the most brittle and least appealing of the three leading actresses, her Maria air-headedly talking to the boss about things that are none of her business and not nearly apologetic enough about it to her friend and also making a play for Louis Jourdan’s charming Prince by using lying wiles and subterfuge. Howard St. John is a gruff boss and Kathryn Givney his archly judgmental wife. Cathleen Nesbitt offers regal dignity as Jourdan’s solicitous mother.

The film’s original Cinemascope aspect ratio of 2.55:1 is faithfully rendered in this 1080p transfer using the AVC codec. The transfer is spotless throughout and offers good-to-excellent sharpness (those sometimes lengthy opticals notwithstanding – not the transfer’s fault). Color is also most appealing and usually well saturated even if skin tones seem a bit on the brown side. Occasional scenes have a bit less color than those on either side, a somewhat strange anomaly but not a crippling one. The movie has been divided into 24 chapters.

The disc offers three sound configurations: DTS-HD Master Audio encodes in 2.0 stereo, 4.0, and 5.1. I found the 4.0 the most engaging and accurate with its directional dialogue and a nice balance between the dialogue, Victor Young’s background score, and the film’s sound effects. The 5.1 audio track is the default but offers for me the blandest sound design of the three. No age-related artifacts like hiss, crackle, or flutter were present.

Audio Commentary: film historian Jeanine Basinger offers a fine if generic overview of the film with details on the principal actors, the Cinemascope process, and the movie’s production.

Enclosed Booklet: contains some color stills, original poster art on the back cover, and film historian Julie Kirgo’s thoughtful essay on the movie.

One of the classic romances of the 1950s (even if its romantic content is rather sanitized and restrained), Three Coins in the Fountain makes a welcome stateside debut on Blu-ray with its Oscar-winning title song and color cinematography among the virtues this disc captures most expertly. There are only 3,000 copies of this Blu-ray available. Those interested in purchasing it should go to either www.twilighttimemovies.com or www.screenarchives.com to see if product is still in stock. Information about the movie can also be found via Facebook at www.facebook.com/twilighttimemovies.

I think Matt has summarised the film excellently - in fact, I congratulate him! - but I disagree about the picture quality. In my opinion: It's TOO BLOODY DARK! .

Robin9 said:
I think Matt has summarised the film excellently - in fact, I congratulate him! - but I disagree about the picture quality. In my opinion: It's TOO BLOODY DARK! .
Click to expand...

And your opinion has been duly noted. Where's Bruce?

Robin9 said:
I think Matt has summarised the film excellently - in fact, I congratulate him! - but I disagree about the picture quality. In my opinion: It's TOO BLOODY DARK! .
Click to expand...

Thanks for the kudos, but I didn't find it to be so on my OLED.

I have the DVD. I was not sure if I wanted to upgrade to the Blu-ray as the sound and extras are the same. Caps-a-holic and dvdbeaver did not do comparisons. I found some screen caps from another site so I compared them to my DVD. My DVD player on the laptop does not work so I downloaded VLC software. All I did was screen print and copy to here on the DVD. The Blu-ray I copied the cap to a file. I am seeing a difference but it's not dramatic.

OK, you can all flame me and tell me I don't know what I'm talking about. I can take it. I always thought it a good upgrade.
A bit sharper and if course much better lossless sound.
I use the 4 track.
If you are going to move on this Roland, better while it is around!

I just did a blind purchase of this as part of the Twilight Time sale last night. It sounds delightful.
You must log in or register to reply here. 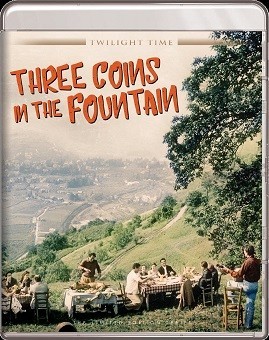