Forum List What's new Dark Style Change width
Log in Register
What's new Search
Menu
Log in
Register
Navigation
Install the app
More options
Dark Style
Close Menu
Posted on March 4, 2018 by Timothy E
You are using an out of date browser. It may not display this or other websites correctly.
You should upgrade or use an alternative browser.
Great cast of actors in award-nominated performances 4.5 Stars

Martin McDonagh(In Bruges) was inspired after traveling through the Southeast U.S. and seeing billboards regarding an unsolved crime. The result was Three Billboards outside Ebbing, Missouri.  Frances McDormand, Sam Rockwell , Woody Harrelson, and Peter Dinklage have memorable roles in this feature written, produced, and directed by McDonagh.

“All this anger, man, it just begets greater anger.”

Anger, and love, are themes recurring in Three Billboards outside Ebbing, Missouri.  Mildred Hayes(Frances McDormand) is angry that her daughter was raped, burned and murdered, and the perpetrators have never been brought to justice.  Mildred rents three vacant billboards close to her home to goad the police into solving the crime, and remind people that the wrongdoers have never been punished.  Police Chief Bill Willoughby(Woody Harrelson) bears the brunt of Mildred’s anger as he is called out by name on the billboards.  Willoughby is dealing with his own terminal illness, and is arguably the only person in the film who does not act in anger.  Officer Jason Dixon(Sam Rockwell) is loyal to his chief and acts out in anger in response to Mildred’s provocations.  Of the 4 elements, fire is the one that expresses anger best, so it is appropriate that fire figures prominently in the story since it also played into the demise of Mildred’s daughter.

McDormand, Harrelson, and Rockwell have each been nominated for Academy Awards for their performances in this film.  Rockwell seems destined to take home a trophy based on his performance in this film and as a reward for his body of work in his career as a character actor.  Harrelson has a great role here, but he is in competition with Rockwell for the same award.  McDormand plays the type of character that she excels at playing, a person who demands things on her own terms and seems indifferent to what anyone else thinks about that.  Peter Dinklage(Game of Thrones) plays James, a friend of Mildred’s who comes to her aid at a crucial moment.

Three Billboards outside Ebbing, Missouri is solid entertainment laced with dark humor.  As screenwriter, Martin McDonagh excels in drawing the viewer’s interest into his characters, and one does not know what will happen next as one event leads to another in the fictitious Ebbing.  Even so, the screen story is not without its flaws.  We know that Rockwell’s Officer Dixon is a racist because the characters say that he is a racist, not because we see him act overtly racist.  The most severe police brutality that we see by Dixon is inflicted on a white victim, which implies that Dixon does not discriminate in his civil rights violations.  Officer Dixon reads comic books, which is a device seemingly used deliberately to convey that he is not very smart.  This is such a tired cliché that one is surprised to see it s use in an Academy Award nominated screenplay.  Chief Willoughby and Officer Dixon seem like an alternate reality version of Sheriff Andy Taylor and Deputy Barney Fife, if Barney were brutal instead of mild-mannered.

The building expectation of “what will happen next?” is one of the film’s strengths.  To McDonagh’s credit, the story does not tie up all of its loose ends neatly.  The film ends leaving most viewers wanting to see more, as momentum builds towards a denouement which the audience is left to imagine rather than observe.  One can almost imagine audience demand leading to a sequel picking up where this film leaves off.  As in life, there are still unanswered questions remaining at the end of the film.

Three Billboards outside Ebbing, Missouri appears on 4K UHD and Blu-ray disc in its original 2:39.1 aspect ratio.  The 4K UHD disc is in 2160p using the HEVC codec with HDR.  The film was finished as a 2K digital intermediate but upscales wonderfully.  Fine detail is particularly good and not what one expects from up-rezzed 2K.

The English DTS 5.1 HDMA serves the feature well.  Directional audio is well placed but minimal with most audio from the front channels.  The pop and crackle of flames and other sound effects employ appropriate directional audio.  Dialogue is always appropriately audible over the score.

Three Billboards outside Ebbing, Missouri is recommended, flaws and all, as an entertaining film in which you will constantly wonder what is next to happen.  The video and audio quality on the 4K UHD and Blu-ray disc are first rate.   The special features are worthwhile, particularly so for McDonagh’s Academy Award winning short Six Shooter.  Great performances from the cast and an interesting and fairly unpredictable story make Three Billboards outside Ebbing, Missouri worthwhile viewing. 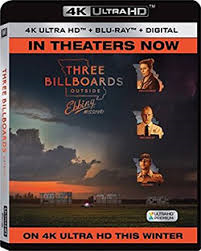