Forum List What's new Dark Style Change width
Log in Register
What's new Search
Menu
Log in
Register
Navigation
Install the app
More options
Dark Style
Close Menu
Posted on June 2, 2018 by Josh Steinberg
You are using an out of date browser. It may not display this or other websites correctly.
You should upgrade or use an alternative browser.
Brilliant new restoration of the first Cinerama feature 5 Stars

This Is Cinerama was the inaugural release in Cinerama, and was first released on Blu-ray in 2012. This brand new edition returns, for the first time, to the original three panel camera elements to present a restoration that is a stunning improvement over the original disc. While the film itself can at times seem quaint, this outstanding presentation serves as a wonderful souvenir to those lucky enough to have seen it in Cinerama originally, and also doubles as a fantastic simulation for those new to the process.

This Is Cinerama was the first feature produced by Cinerama, debuting their three camera process which allowed a mass audience to see, for one of the first times, a widescreen image on a gigantic screen. Although the idea of synchronizing three 35mm cameras to create a panoramic 146 degree angle curved image was eventually replaced by easier single-strip processes like 35mm CinemaScope and 70mm, This Is Cinerama was in many ways the beginning of a larger-than-life immersive aesthetic that remains popular today. While the process may have been retired, the size of the adventure offered is something that filmmakers today still make efforts to exceed.

The film begins with a lengthy prologue hosted by Cinerama producer Lowell Thomas. Presented in black and white in a standard 35mm Academy frame, this introduction serves two purposes. The first, and most obvious, was to explain to a new audience what they would soon be seeing, and how this new process worked. The second, but equally important, was to get the audience comfortable in their seats, and used to the smaller image. This serves to maximize the “WOW” factor when the curtains pull back to reveal a full color, gigantic curved widescreen image. It’s a simple trick, yet remarkably effective. (So effective, in fact, that modern filmmakers still take advantage of that same dynamic in certain IMAX presentations by shooting portions of those films in conventional formats and then transitioning to the larger IMAX footage for the most noteworthy sequences.)

After the film transitions fully into the Cinerama format, it takes on the form of a travelogue, moving from different locations to showcase the different potential uses for the new format. As the film moves from one segment to another, Lowell’s excited reminders that “this, too, is Cinerama” serve to remind the audience that the goal here was not to present a unified story, but to showcase how the technology could be used. The opening sequence, taking the viewer on a ride of the Rockaways Playground rollercoaster, remains thrilling to this day and is easily one of the most effective uses of these cameras. Similarly, views of Niagra Falls and the American west are stunning to behold. A Scottish military tattoo event in Edinburgh is remarkable to witness (and the festival, which is still held to this date, is significantly easier to view on this disc than the travel to the real thing would be for most). But the filmmakers do more than just fly the camera over stunning landmarks, and there are several smaller scale sequences that are equally effective. A church choir performance (actually shot as test footage several years before the rest of the film, and presented in sepia tone) is not only a great demonstration on how the wide screen can capture the feel of a large room and use the large screen to convey both intimacy and awe. An outdoor performance with the Vienna Boys’ Choir is charming in its earnestness.

While the visual enhancements of Cinerama are perhaps the most obvious, the aural innovations are well worth noting. While the introduction to the film’s first act is presented in black and white Academy ratio, with mono sound, a later segment in the film returns us to a similar setting, with Lowell Thomas once again addressing the audience directly. But this time, he’s in full color and widescreen. As he moves around the room, the sound of his voice follows, allowing the audience to both hear and consciously understand the potential applications for multi-track sound. This can be heard in various places throughout the film, which features both subtle and aggressive uses of surround sound to help create a truly immersive experience.

While the film was clearly designed to be seen on the largest screens possible, this new restoration is still a stunning achievement to view on a home screen. (I found that sitting slightly closer to the screen than I usually would, while trying to focus my vision primarily on the center panel, allowed me to shut out the rest of the world pretty effectively and to get sucked into the film.) HTF’s own David Strohmaier is responsible for the restoration on display here, and it is remarkable what he and his team have achieved.

This Is Cinerama is presented in the Smilebox format to preserve both the original aspect ratio and screen geometry of the original Cinerama presentation. Working with original three panel elements for this restoration, the presentation here is a tremendous improvement over the previous disc edition for this title. The join lines have been eliminated from a large portion of the film, and for the portions where they do remain, their presence is minimal and unobtrusive. Age-related artifacts like scratches and debris have been mostly eliminated. The quality of color can vary slightly throughout, but is generally strong and pleasing. The clarity and detail presented within the image is impressive. While the overall presentation is not entirely perfect (due to issues out of the control of the restoration team), it is never anything less than stunning.

As stunning as the visual presentation is, the aural presentation is just as much of a treat for the ears. The DTS-HD MA 5.1 soundtrack is incredibly immersive, featuring a wide soundscape and excellent separation that puts the viewer in the center of the action. There is also a PCM 2.0 stereo option, which lacks the dimensionality of the 5.1 track but still sounds quite good. Age-related artifacts have been almost entirely removed, making the film sound almost as if it had just been recorded yesterday.

There are no subtitles available for the main feature.

Audio Commentary – This lively track features insight from restoration expert David Strohmaier, Cinerama Inc. President John Sittig, historian Randy Gitsch and original crew member Jim Morrison. It’s an informative, scene-specific track that runs the length of the film, full of factual information about both the Cinerama process as well as anecdotes relating to the production of the film’s many sequences.

The Best In The Biz (57:51, HD) – This insightful documentary is about the music composers who worked on the many different films produced by Cinerama.

Restoring This Is Cinerama (12:37, HD) – This incredible featurette gives a detailed presentation on how David Strohmaier was able to restore the film. This is one of the best restoration featurettes on any release, and is well worth the time – it may even be worth viewing before the film itself to gain an appreciation for what was achieved.

Cinerama Anywhere (8:23, HD) – This vintage French documentary, presented in Academy ratio black and white with English subtitles, shows how a makeshift Cinerama unit traveled through Europe, building and then breaking down a full Cinerama theater inside a tent in various locations.

Tribute To The New Neon Movies (13:57, SD) – This short featurette shines the spotlight on a local Ohio theater where a dedicated projectionist resurrected the format for new audiences (prior to the newer restoration presented on this disc).

Radio Interview With Cinerama Creator Fred Waller (15:30, audio with stills) – This radio interview with Waller, recorded just before the opening of the film, is illustrated with various stills of Waller.

Trailer (3:33, HD) – This new trailer was created for the film’s restoration.

Cinerama Returns To The Cinerama Dome (6:01, HD) – This trailer was created prior to a 2002 festival held at the Los Angeles Cinerama Dome to promote the screenings.

Breakdown Reel (4:52, HD) – This Academy ratio presentation was prepared for Cinerama theaters to run in the event of technical issues during a presentation. Lowell Thomas apologizes for the interruption, and continues speaking in a similar fashion to his prologue. There are several points where he “checks” to see if the projectionists are ready to resume the picture, and then, not getting a response, continues on with his stalling. In the event that the projectionists were able to solve the problem quickly, these different check points would have allowed them to cut off the breakdown reel quickly, while also giving some more padding for complicated repairs.

TV Spots (1:44, HD) – TV spots for This Is Cinerama and Seven Wonders Of The World with Lowell Thomas emphasizing the special event nature of Cinerama presentations.

Booklet – A 12-page full color booklet which includes an essay by Randy Gitsch and a selection of stills from the film and promotional artwork.

This new presentation of This Is Cinerama from Flicker Alley is a treat for Cinerama lovers anywhere, and an excellent introduction for those new to the format. The new restoration presented here is stunning, and the bonus features offer wonderful insight into the creation and presentation of the original film. This is an essential purchase for anyone who was lucky enough to attend the original release and for those today wondering what all the fuss was about.

Link is not clickable.

Works for me as well.

Will the shorts Journey to the Stars and To the Moon and Beyond be released?
You must log in or register to reply here. 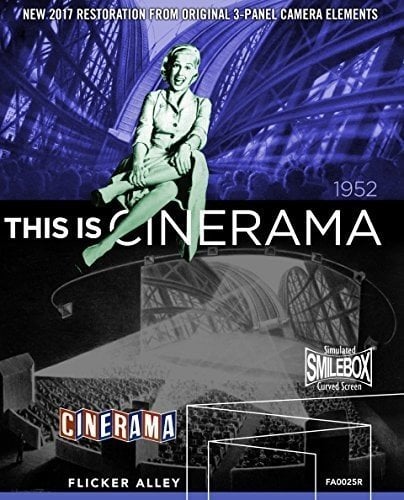