Richard Fleischer’s These Thousand Hills is a western that has a little more on its mind than cattle herding, lynch mobs, or pretty gals, subjects which often drive many westerns and which are found in this one, too, even if they aren’t its emphasis.

Richard Fleischer’s These Thousand Hills is a western that has a little more on its mind than cattle herding, lynch mobs, or pretty gals, subjects which often drive many westerns and which are found in this one, too, even if they aren’t its emphasis. This is more of a morality play than an action-packed popcorn picture with a focal character whose simple aspirations grow into interests more monumental than even he dreamed of earlier in his life. It’s a fine entertainment even if some of the casting is spotty, and it’s directed in such a way that unless one has read the book on which it’s based, you’ll never be quite sure where it’s going or how it will end.

Young Oregon cowboy Lat Evans (Don Murray) lands in Montana eager to earn as much money as he can so he will never be in danger of having nothing like his father when he passed on. After a season bronco busting and cattle herding, he and best friend Tom Ping (Stuart Whitman) spend a winter wolfing in the woods where they lose all their valuable pelts when Tom has to rush Lat back to town when he’s shot by Indian thieves. With no money and unable to borrow any from the bank without collateral, Lat agrees to borrow $2,000 from his dance hall girl friend Callie (Lee Remick) to start a ranch and within five years, it’s the biggest and most profitable operation in the territory. But though he’s paid Callie back her money and is grateful to her for her generosity, he actually falls in love with the banker’s (Albert Dekker) niece Joyce (Patricia Owens), breaking Callie’s heart and driving her back into the arms of the town ruffian Jehu (Richard Egan). Lat continues to gain money and political clout while his former friend Tom has to turn to cattle and horse rustling when times get lean, an activity that Lat as one of the town leaders must take part in with the investigation.

Alfred Hayes has structured his screenplay (based on the novel by A. B. Guthrie Jr.) so that we follow Tom on his long life journey from a green, ambitious young man to a respected town elder whose basic sense of right and wrong has never left him but has become a bit clouded by his thirst for wealth and power. We see him continually choose the right path when temptations might have led him astray (making, of course, the characters who support the leading man a much more colorful bunch), so that when his drippy wife Joyce accuses him late in the film of dishonoring their marriage with his association with the dance hall girl, one can hardly believe his eyes and ears since Lat’s entire life has been one of honesty and forthrightness. Director Richard Fleischer gets things off to a dandy start with an exciting bronco busting sequence as Murray’s Lat proves his worth to the boss man (Harold J. Stone), and there are fights and lynchings and horse races and wolf tracking to keep action fans satisfied while Lat struggles with the peculiar niceties of the cattle town’s varying social classes. There is also an effective success montage as Lat builds his small cattle ranch into a powerhouse using some foresight and common sense to keep his enterprise annually profitable while other ranches go under.

Don Murray had earned an Oscar nomination as the strutting, cocky cowboy in Bus Stop, but his Lat is the antithesis of that character: a simple, honest, modest man driven to make a success but one who is quiet about his own achievements. He’s forceful enough to stand up for his beliefs (even when they’re occasionally a bit wrongheaded), but Murray leaves the cockiness and swagger for Richard Egan’s Jehu, the town scoundrel and bully. From the first attempts to cheat Lat during a horse race right to the very end of the film with their lives on the line, Egan dominates the screen when he’s on it. Stuart Whitman gives a good account of himself, too, as the flawed Tom Ping, great good friend to Lat but a man driven by desperation in the latter stages of the film. Very effective as men who circle into and out of Lat’s orbit are Harold J. Stone as honest boss man Ram Butler, Royal Dano as concerned friend Carmichael, Fuzzy Knight as Sally the Cook, and Albert Dekker as the town banker. Lee Remick earns the distaff side of the acting honors as the faithful barmaid Callie, and Jean Willes as her best friend Jen has less to do but does it well. Patricia Owens is the weak link in the cast as Joyce, not sharing much chemistry with Don Murray and not able to surmount audience distaste for her as her jealousy and unreasonableness mount in the latter parts of the movie.

The film’s Cinemascope aspect ratio of 2.35:1 is faithfully generated in this widescreen transfer which is anamorphically enhanced for modern televisions. Sharpness is generally excellent especially in close ups where we can see facial features and hair textures even in standard definition. Color is very nice as well staying consistent and solid throughout the presentation and with believable skin tones. There are only a few stray flecks here and there. Fortunately, since These Thousand Hills had a previous pressed commercial DVD release, Fox had an anamorphic transfer on hand to issue on this MOD release. The movie has been divided into chapters every ten minutes so this film contains 10 chapters.

The Dolby Digital 2.0 stereo sound mix may be lacking a bit in the low end, but it is still a worthwhile match to the outstanding picture quality being presented here. Dialogue has been well recorded while Leigh Harline’s jaunty and engaging score gets a nice spread through the stereo channels. Sound effects also are blended well without overpowering the dialogue. No age-related artifacts mar the aural presentation.

These Thousand Hills is an entertaining western morality play, and the Fox Cinema Archive release replicates the original pressed DVD transfer that was sharp, colorful, and well worth having. Western fans and admirers of the stars who don’t already have the previous release should be more than satisfied with this one. 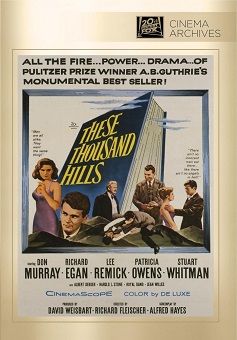