In the past I have given you many kinds of suspense pictures, but this time I would like you to see a different one. The difference lies in the fact that this is a true story, every word of it, and yet it contains elements that are stranger than all the fiction that has gone into many of the thrillers that I have made before. – Alfred Hitchcock

Christopher Emmanuel “Manny” Balestrero (Henry Fonda) is a musician who plays the upright bass for the house band at the famous Stork Club in New York City in 1951. The surroundings are plush and the club’s clientele is ritzy, but Manny’s pay is a relatively meager $80 per week. The band plays on into the wee hours, and his commute by subway to his home in Queens gets him home near dawn, after the milkman has delivered two quarts of milk. Manny looks in on his two sleeping boys and then is surprised to find that his wife, Rose (Vera Miles), is still awake. She is suffering from impacted wisdom teeth, and she is further distressed because the dentist has told her that her treatment will cost nearly a month’s pay.

Manny decides to raise the money by borrowing it from Rose’s insurance policy. He brings her policy to the insurance company’s office, where several clerks recognize him as a man who held up the office on two occasions. After Manny leaves they contact the police, who have been unsuccessfully searching for a man who has robbed several businesses in the area. On Manny’s day off he visits his father, but when he returns he is greeted by three NYPD detectives. They insist that he accompany them to the precinct for “routine questioning,” and they do not even allow him to tell Rose where he is going.

This takes place fifteen years before the Supreme Court ruled that suspects have Miranda Rights, so initially the detectives do not even tell Manny that he is a suspect, much less that he has the right to have a lawyer. Led by Detective Bowers (Harold J. Stone), he is questioned at length about his job, his family, and his financial condition. He agrees to let the detectives take him to stores which have been robbed, where he is paraded in front of the proprietors to see if they will identify him. Then it is back to the precinct, where Manny is told that he can clear himself if he agrees to print the wording of a note which the perpetrator handed to a clerk during one of the robberies. Manny, who unquestioningly believes the detectives when they assure him that he has nothing to fear if his is innocent, complies. Unfortunately for him, comparing printing is not as definitive as comparing handwriting, and Manny becomes a full-fledged suspect when he misspells a word exactly as the crook misspelled it. His fate is sealed when he is placed in a lineup and is identified by two employees of the insurance company (inexplicably, by today’s standards, the two witnesses are allowed to stand together during the lineup, so when one picks out Manny the other naturally follows suit). Manny is booked and in stunned disbelief spends the night in jail.

There is a glimmer of hope for Manny when he finds Frank O’Connor (Anthony Quayle), an attorney who believes him and is willing to defend him. However, establishing alibis for the dates on which the robberies occurred proves to be difficult, and the strain causes Rose to fall into a deep depression, and at one point she appears to question Manny’s innocence.

The script by Maxwell Anderson and Angus MacPhail adheres closely the actual facts of the case, which came to national prominence in 1953 when an article by Herbert Brean appeared in Life magazine. The article can be read online, but I recommend that you watch the film first:

“A Case of Identity” by Herbert Brean

An interesting aspect of The Wrong Man is that the only truly bad guy in the story is the real criminal. Although the detectives use methods which are prohibited today, they are of their time and are not out to frame Manny. Likewise, the witnesses have genuinely convinced themselves that Manny is the man who robbed them. In fact, the film would be less compelling if it were simply a case of an innocent man being framed. The most chilling aspect of The Wrong Man is the realization that what happened to Manny could happen to anyone.

Henry Fonda is excellent as Manny, portraying him as the steady, reliable everyman that the real Manny apparently was. Vera Miles is terrific as Rose, a loving, supportive wife who becomes overwhelmed by feeling of guilt because it was her toothache which set the wheels in motion for Manny’s nightmare. Anthony Quayle is fine in the supporting role of Frank O’Connor, an attorney who went on to gain much prominence in New York and was the Democratic candidate for governor in 1966 (he lost to Nelson Rockefeller). Other familiar faces in small roles include Werner Klemperer and Nehemiah Persoff. While Manny and Rose are searching for alibi witnesses, an apartment door is opened by two young girls. They are unbilled but are played by Bonnie Franklin and Tuesday Weld, who were 12 and 13 years old when the film was made.

Although The Wrong Man has a documentary feel to it, there are some nice Hitchcock touches. When Manny gets on the subway to ride home, you have to look quickly to notice that the headline reads “Queens Holdup.” There is a brilliant shot of Manny entering his jail cell after his arraignment, which joltingly conveys a feeling of extreme claustrophobia. The film also includes a MacGuffin which appears early and is alluded to several times. Interestingly, author Ken Mogg, who has written extensively on Hitchcock, believes that the term “MacGuffin” may have been coined by screenwriter Angus MacPhail.

The Wrong Man is neither a shocker nor a thriller, but it is a suspenseful, engrossing and thoroughly grim tale of an innocent man who arrives home one evening and within hours finds himself facing the prospect of a long prison term. It does happen. 60 Minutes recently ran a story about Anthony Ray Hinton, an Alabama man who spent 30 years on death row after being convicted of a crime which he did not commit. I can only imagine what it must be like for an innocent man or woman to spend even a few months behind bars, much less 30 years.

There is a written coda which was tacked on by Warner Brothers which states that by the time of the film’s release Rose was totally cured, but that appears not to be the case and it reportedly angered Hitchcock.

The 1080p black & white image is delivered via the AVC codec. It is framed at 1.85:1, which looks fine to me, although IMDB claims that it was originally projected at 1.66:1. Perhaps we can get Bob Furmanek to clarify that for us. The cinematography by Robert Burks is quite grainy, which gives the film a gritty look that gives the appearance of being a documentary. Overall the resolution is excellent. There are a few soft shots, but they appear to be by design. The picture is in pristine condition, with no visible dirt or damage.

Those who do not care for the grain can take a look at the featurette about the film, which contains clips which clearly have undergone considerable DNR.

Most of the outdoor scenes take place at night or under grey skies, and the inky black levels certainly contribute to the film’s sense of doom. Most of the exteriors shots were filmed on location in the actual places where the real events took place, which makes me wonder if Richard Brooks was influenced by The Wrong Man when he filmed In Cold Blood a decade later. The outdoor exteriors include a scene shot in Cornwall, N.Y., where Manny and Rose vacationed at the time one of the robberies took place. Other scenes were shot in Ossining, N.Y., but I will not say anything more so as not to commit a spoiler. The New York City scenes were shot in Manhattan and Queens (including scenes of Manny in jail), all of which combines to give The Wrong Man tremendous authenticity.

The film has been divided into thirty chapters.

Our resident expert, Robert A. Harris, has chimed in with his thoughts on how this Blu-ray looks and sounds:

A few words about…™ The Wrong Man — in Blu-ray

The English 2.0 DTS HD-MA is flawless. The other audio options are French and Spanish 2.0 Dolby Digital. The available subtitles are English SDH, French, and Spanish.

Every word of dialogue is clear and understandable. Bernard Hermann’s understated, jazz-infused score does not give off a hint of distortion.

The extras on this Blu-ray disc include the film’s theatrical trailer and an informative 20-minute featurette, “Guilt Trip: Hitchcock and The Wrong Man,” which has been ported over from the 2004 DVD release. It includes comments from such luminaries as Peter Bogdanovich, Robert Osborne, and Richard Schickel. It is fascinating to listed to Art Director Paul Sylbert describe and explain the many contributions he made to the film. It is pointed out that Hitchcock’s method for making sure that the studio did not tamper with his film was to shoot no more film than he absolutely had to. If there was no additional footage for the studio executives to play around there was less chance that they would try to re-cut the movie.

As noted, the film clips in this featurette have been largely scrubbed of grain, giving viewers an opportunity to compare them with the feature as it originally looked.

The Wrong Man is not the sort of film moviegoers typically expect to see from Alfred Hitchcock, but it would be a mistake to dismiss it. It is a cautionary tale about the potential consequences of being the wrong man in the wrong place at the wrong time. The fact that it is a true story makes it resonate even more.

Interested buyers can find it for sale at the Warner Archive website or at the Amazon link at the bottom of this review. 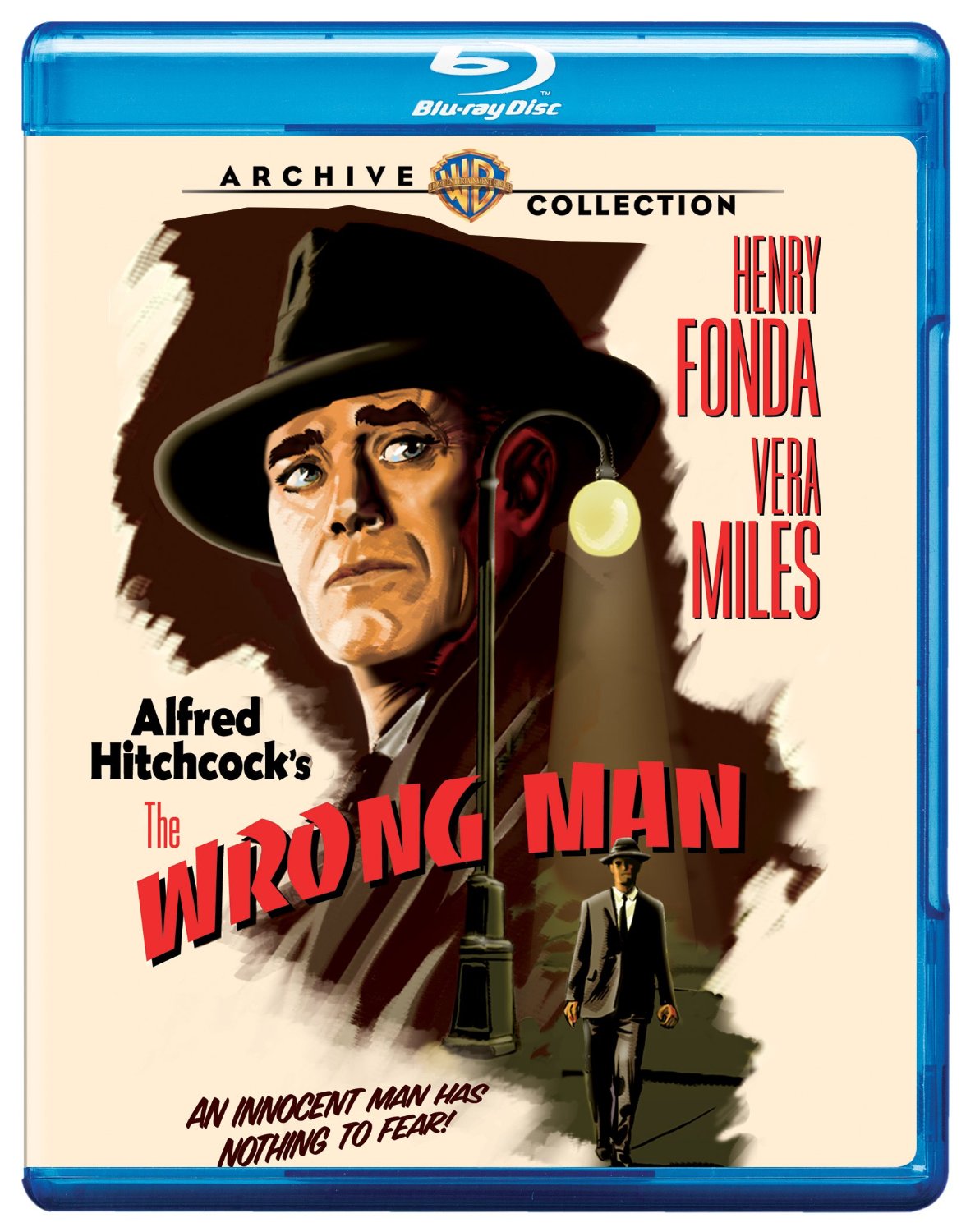