The Woman in the Window is a prime film noir from Fritz Lang featuring outstanding performances and a story that intrigues from the start and draws one into its ever-tightening noose around its protagonist’s neck.

Filmed in 1944 when film noir began to flower as a genre (though it wasn’t known as that for much later), Fritz Lang’s The Woman in the Window can stand almost as tall as its 1944 siblings: Laura, Double Indemnity, and Murder, My Sweet. With a superb cast from leading roles to bit players and an engrossing story whose crime narrative twists ever-tighter as it runs, The Woman in the Window is one of director Fritz Lang’s best, if a trifle less vicious, noirs.

With his wife and children safely on a summer holiday, psychology professor Richard Wanley (Edward G. Robinson) finds himself in the swanky apartment of fetching artist’s model Alice Reed (Joan Bennett) who has brought him there to show him other sketches of her after he showered her with compliments over an especially beautiful portrait he had admired in an art gallery window. Suddenly, the couple is interrupted by the violent intrusion of Alice’s sugar daddy financier Claude Mazard (Arthur Loft), jealously attempting to strangle Professor Wanley for his mere presence. In his panic, Wanley stabs Mazard to death with a pair of scissors, and now the two people are torn whether to report the self-defense stabbing and lose their reputations or try to hide the crime. They choose the latter with Alice cleaning the crime scene and Wanley disposing of the body which, when duly discovered and placed in the investigative hands of his close friend district attorney Frank Lalor (Raymond Massey), place him in uncomfortable close quarters with a man who wouldn’t think twice of trying him should the truth come out. Further complications ensue when Mazard’s lawless bodyguard (Dan Duryea), who knows of his boss’ close connection to Miss Reed, hatches his own blackmail scheme.

Nunnally Johnson’s screenplay, while not exactly airtight (Lalor’s letting Wanley tag along for a crime scene reexamination and his being present at a suspect’s interrogation: neither ring especially true), contains more than a fair share of invention and surprise, helped along immeasurably by Lang’s unending focus on Wanley’s methodical attempts to dispose intelligently of the corpse and making bungles and missteps all along the way, cleverly leaving the audience wondering if Lalor actually knows of his friend’s guilt and is trying to twist him into a confession or if Wanley will be able to stand up under the pressure of his own culpability or give up and confess everything. Studio sets and backlot locations give the perfect feeling of 1940’s noir, aided, too, by the constant deep shadows, rain and thunder on occasion, and one twist and turn after another never letting the two protagonists ever to be able to relax for more than a few minutes. The lengthy set piece where the body is being disposed of is fraught with one minor peril after another from garage attendants to traffic cops, toll booth clerks, and passers-by, any or all of them possibly to turn up later to finger the hapless Wanley. And when the time comes to pull a climactic switch on the audience (one that has proven problematic to many a noir fan but not to this one), Lang handles it more brilliantly than one could have ever thought possible, punctuating his twist with a couple of additional winks at the audience.

Edward G. Robinson plays his milquetoast middle-aged professor beautifully, playing his later faked nonchalance with a bit too much knowing obviousness and sinking ever deeper in despair as their plans one-by-one manage to go awry. Joan Bennett is wonderful as the film’s quasi-femme fatale, a woman we’re never quite sure can be trusted even when she’s being blackmailed herself. Dan Duryea’s slimy villain doesn’t appear until an hour into the movie, and yet he dominates every scene with his sneering confidence and calculation. Raymond Massey is a formidable district attorney with clout and single-mindedness to his task (though his character spills too many of his clues and evidence to his friends that makes him seem somewhat reckless and unprofessional even if they’re being overly inquisitive). Edmund Breon as the third middle-aged friend Dr. Michael Barkstane does well with his few brief scenes. Look fast and you’ll see a couple of Our Gang members in tiny parts: Robert Blake as Wanley’s young son and Spanky MacFarlane as the boy scout who discovers the corpse in the woods.

The film has been framed at its theatrical aspect ratio of 1.37:1 and is presented in 1080p resolution using the AVC codec. The grayscale at its best is wonderfully expressive with deep black levels and crisp whites. Contrast is also nicely dialed in for a first-rate picture. There are occasional slight scratches, a blip or bit of damage here and there, and a couple of strange seeming optical-like changeovers in the middle of scenes sometimes that almost defy description. The movie has been divided into 8 chapters.

The DTS-HD Master Audio 2.0 sound mix is a solid audio track for its era. Dialogue has been expertly recorded and has been combined with Arthur Lange’s Oscar-nominated background score and the sound effects with great confidence. No age-related problems with hiss or other artifacts were detected.

Audio Commentary: film scholar Imogen Sara Smith offers an outstanding commentary on the movie detailing the careers of all of the principal actors, its director, and identifying the other minor players and noting various effects pulled off by director Lang and his crew. A must listen.

The Woman in the Window is a prime film noir from Fritz Lang featuring outstanding performances and a story that intrigues from the start and draws one into its ever-tightening noose around its protagonist’s neck. Recommended! 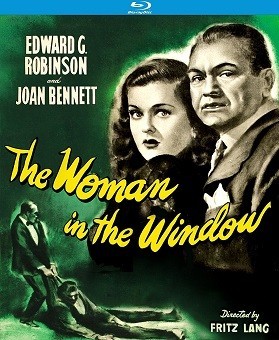