In honor of the film’s 80th Anniversary, Warner Bros. has released the classic The Wizard of Oz on 4K UHD Blu-ray taken from an 8K scan of the original Technicolor camera negatives.

What more can be said of MGM’s classic The Wizard of Oz? Released in 1939, the film received critical praise but was a disappointment at the box office (earning just over $3 million against a $2.7 million budget, in 1939 dollars). Although it eventually turned a profit following a 1949 re-release, it wasn’t until MGM sold the television broadcast rights to CBS in 1956 (marking the fist time a major Hollywood film was presented uncut on a national broadcast network) that the film started to become a beloved classic. So much so, that the movie has been referenced in several movies and TV shows, including Good Morning Vietnam, Wreck It Ralph, Sky Captain and the World of Tomorrow, The Emperor’s New Groove, Gremlins 2: The New Batch, Top Secret!, Stargate SG-1, etc. I had the pleasure of meeting Margaret Hamilton, who plays the Wicked Witch of the West, back in the late 1970s or early 1890s when she was interviewed for a locally syndicated cable access TV show that an after-school program I attended produced called Cinekyd Theatre. I distinctly remember her telling us of how she had been typecast as the Wicked Witch (and even appeared on Sesame Street as that character), the many issues in making the film (including the more caustic make-up they used in those days and the third-degree burns she suffered from during the fire-ball explosion during her exit at the beginning of the film), and being the spokesperson the Maxwell House coffee in her later years. Eighty years after its initial release, though, The Wizard of Oz is just as magical today.

The Wizard of Oz is, at the time of this writing, the oldest movie to be released in 4K UHD Blu-ray. Warner’s press release is a bit confusing, though, in that it states that a new 8K 16-bit color scan of the original Technicolor camera negative was the basis of this new 2160p release with all three flavors of high dynamic range, HDR10, Dolby Vision, and HDR10+. What is confusing is the word “new” when mentioning the 8K scan. The previous Blu-ray release from 2013 (as well as that year’s 3D conversion) also used an 8K scan as the basis of their 1080p transfer, so it’s hard to say if the same 8K scan was used for this release but spruced up a bit with high dynamic range. Viewing this on an HDR10-capable display, this is a much more film-like presentation (not that the 2013 Blu-ray was a slouch by any means), with more balanced and naturalistic colors and much more controlled contrast (which often appeared boosted to some degree on the 2013 Blu-ray). Detail is also more refined, obviously from the increased resolution, as this is a true 4K release. This is the best The Wizard of Oz has ever looked.

Good news, bad news here. The good news is that the included DTS-HD MA 5.1 track has been slightly remixed to boost some sound effects and dialogue in many of the key sequences and increase the LFE presence in those sequences as well (notably the fireballs during Wicked Witch’s exit from Munchkinland and the Wizard’s grand hall). It is still a fairly front-heavy track (as was the 5.1 Dolby True HD track from the original Blu-ray and the 5.1 DTS-HD MA from the 2013 releases), spreading the music across the Left, Center, and Right channels with occasional surround activity. The bad news is that the original mono track was not included on this 4K release.

The 4K UHD disc includes two special features. The remaining extras can be found on the included 2013 Blu-ray release.

The Wonderful Wizard of Oz: The Making of a Movie Classic (upscaled 1080p; 51:38): The 1990 documentary hosted by Angela Lansbury that first aired on CBS returns in this release after being absent since the 70th Anniversary Blu-ray release in 2009.

Blu-ray Disc:
Audio Commentary: This is the same track as on the UHD disc.

Digital Copy: An insert contains a code to redeem a digital copy (in UHD where available) from Movies Anywhere that also includes some additional extra features, such as It’s a Twister! It’s a Twister! The Tornado Tests, Deleted Scenes, Excerpts from 1967 TV Series “Off To See the Wizard”, The Magic Cloak of Oz and His Majesty, The Scarecrow 1914 silent films, etc.

Many will likely agree thatjust the mere mention of The Wizard of Oz in 4K UHD with HDR makes this disc a must-have, and strong sales hopefully will let the studios know that we want more classic films from their vault in this format. Highly Recommended. 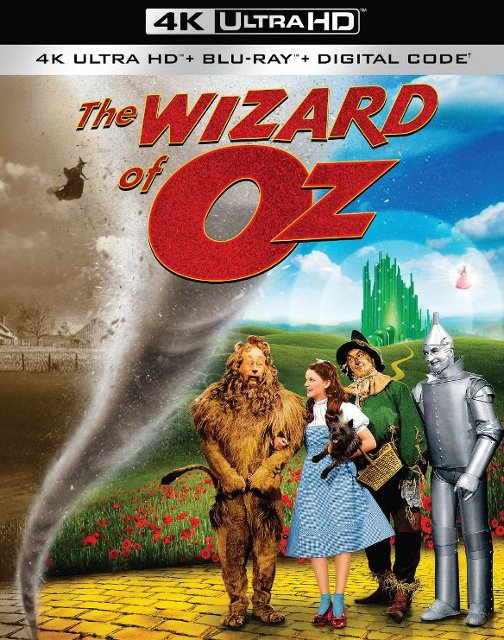