Forum List What's new Dark Style Change width
Log in Register
What's new Search
Menu
Log in
Register
Navigation
Install the app
More options
Dark Style
Close Menu
Posted on November 21, 2019 by Todd Erwin
You are using an out of date browser. It may not display this or other websites correctly.
You should upgrade or use an alternative browser.
Finally on Blu-ray 3.5 Stars

Montreal dentist Nichlas “Oz” Oseransky (Matthew Perry) is leading a rather mundane life. His wife (Rosanna Arquette) loathes him, and does his mother-in-law (Carmen Ferland). Oz isn’t all that fond of them, either, and a divorce is out of the question, as he has been saddled with his late father-in-law’s debt. As he says to his office assistant, Jill (Amanda Peet), he’s worth more dead than alive, to which Jill suggests he find a hit man to take her out for good. Things change when just released from prison hit man Jimmy “The Tulip” Tudeski (Bruce Willis) moves in next door. Oz recognizes him almost immediately, at first freaking out until his wife suggests he rat Jimmy out to mob boss Janni Gogolak (Kevin Pollak) and collect the finder’s fee. What follows is a series of crosses and double crosses as everyone takes out hits against everyone else, as Oz falls for Jimmy’s wife (Natasha Henstridge), and Jill turns out to be a wanna-be hit woman originally hired to take out Oz and falls for Jimmy.

Director Jonathan Lynn has a knack for building a comedy with a slow simmer in films like My Cousin Vinny, Clue, and The Distinguished Gentleman, and would return to the subject of hit men again ten years later with the under-rated Wild Target. The laughs start slow in The Whole Nine Yards, but build to a rather satisfying conclusion thanks to Lynne’s direction and Mitchell Kapner’s screenplay. Matthew Perry gets the bulk of the physical humor, bouncing off of walls and hit man Michael Clark Duncan like a pinball. Amanda Peet and Bruce Willis are obviously having a great time in these roles, taking almost too much glee in killing their marks. The Whole Nine Yards is not a great film nor is it one that will knock you on the floor laughing, but is still very enjoyable.

The Whole Nine Yards was never a great looking movie to begin with, as I recall when I first saw it theatrically back in 2000. The transfer supplied by rights holder Morgan Creek to Sony for this release is acceptable. Colors are accurate and not overly saturated. There does appear to be some evidence of minor use DNR and edge enhancement, with haloing around characters in some of the scenes and some occasional pastiness on faces, but only if you are really looking for it. Contrast and black levels are very good, with minimal crushing in some of the darker sequences.

The default DTS-HD MA 5.1 track on The Whole Nine Yards is a fairly standard comedy track with a nice wide front soundstage and some occasional surround activity, mostly music extension and atmospherics like street noise. LFE adds some low end to the jazz-infused score by Randy Edelman, but effects like gun shots are anemic. Dialogue is clear and understandable throughout.

Audio Commentary with Director Jonathan Lynn: Lynn talks rather candidly about the production, centering around the performances and shooting in Montreal.

While not a comedy classic per se, The Whole Nine Yards is a darkly funny movie that is still enjoyable today.

I remember first seeing this movie at Universal City during my first HTF Meet out in LA with a group of HTF members. It took a long time for this movie to finally get a BD release which is surprising to me. Thank you for your fine review as I plan on picking this one up.
J

I have always liked this film- good black comedy with a little romance thrown in. I’ll probably order it.
You must log in or register to reply here. 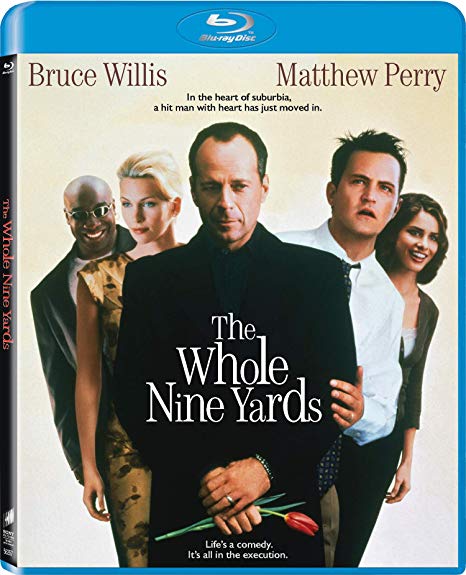