Forum List What's new Dark Style Change width
Log in Register
What's new Search
Menu
Log in
Register
Navigation
Install the app
More options
Dark Style
Close Menu
Posted on January 18, 2020 by Matt Hough
You are using an out of date browser. It may not display this or other websites correctly.
You should upgrade or use an alternative browser.
Absorbing British "kitchen sink" drama 4 Stars

Writer-director Bryan Forbes’ absorbing look at a delusional old lady coping as best she can in a more venal England merits considerable attention in The Whisperers.

Writer-director Bryan Forbes’ absorbing look at a delusional old lady coping as best she can in a more venal England merits considerable attention in The Whisperers. Among the last of the “kitchen sink” dramas produced during the British cinema’s own New Wave movement, The Whisperers earns its exalted place due to star Edith Evans’ towering performance and Forbes’ detailed attention to seedy British way places for its not-quite destitute citizens.

Elderly Mrs. Margaret Ross (Edith Evans) begins to lose her grip on reality when she starts to hear “voices” that seem to be conspiring against her. Separated from her selfish, dishonest husband Archie (Eric Portman) for many years and now living alone, Mrs. Ross is patiently waiting for a windfall from her late father’s nonexistent estate while occasionally asking for help from National Assistance. When her thieving son Charlie (Ronald Fraser) stashes a large sum of stolen cash in her apartment, Mrs. Ross finds it, assuming the money is her long-awaited inheritance, but it isn’t long before others in her orbit find ways to separate her from some of that cash and her life is turned upside down.

Based on the original novel by Robert Nicolson, screenwriter-director Bryan Forbes’ script changes locales from the book but retains the dreamy delusions of the aged leading character. We spend a glorious quarter hour watching her daily routine: requesting help with bills and clothing from the National Assistance, getting warm by the heat pipes of the local free library, gaining a free lunch at the local Salvation Army, and making her way home with fish and chips and reading (and later storing away) the newspaper her supper is wrapped up in. But while she’s seemingly content with this impoverished existence (even while squabbling with the voices in her head whispering accusations to and about her), her tidy world is due for a shake-up with the return of her ne’er-do-well son Charlie and the nefarious Mrs. Noonan (Avis Bunnage) who spies Margaret’s bankroll and immediately makes plans to claim it as her own. Forbes instills dread in the viewer as we watch Mrs. Ross helplessly fall into the hands of these schemers (even though he uses the opportunity to showcase some alluring cinematic compositions with the help of cinematographer Gerry Turpin), and the entire center of the movie where she’s robbed of her money and dumped in an alley while unconscious provides some of the movie’s grimmer, more disturbing moments. Forbes’ focus switches to Margaret’s deadbeat husband Archie during much of the film’s third act with quite a different tone and pace from the earlier scenes when Margaret’s life was being detailed, and the film seems a bit discombobulated because of it, but the director manages to level his tottering craft by coming full circle by the conclusion.

Dame Edith Evans was almost everyone’s pick to win the 1967 Academy Award for her indelible performance after having snapped up Best Actress honors from the National Board of Review, the New York Film Critics, and the Golden Globes prior to the Oscars, but it wasn’t to be (the honor went, unfairly, to Katharine Hepburn for Guess Who’s Coming to Dinner). But it’s still a brave, monumental, and subtle performance: observe her misconstrued vanity despite her poverty in the Assistance office, watch Margaret’s mix of glee and overwhelming responsibility upon discovering the cache of money; see Evans’ most extraordinary scene of exhausted unconsciousness as she’s given a Mickey Finn by the crooked Mrs. Noonan, and never once does she shrink from Forbes’ extreme close-ups which reveal every wrinkle, crinkle, and sag of her seventy-eight years of living. In the film’s most understanding and gentle performance, Gerald Sim as the National Assistance’s caring officer Mr. Conrad excels. Memorable, too are Eric Portman’s calculating scoundrel-of-a-husband Archie, Avis Bunnage’s despicable Mrs. Noonan, and Nanette Newman’s plain-spoken upstairs neighbor.

The film has been framed at 1.66:1 and is presented in a 1080p transfer using the AVC codec. It’s a beautiful looking image with crisp, detailed sharpness and a most accurate grayscale that features bold black levels and pristine whites. There are no age-related anomalies of note to report, and the grain levels are accurate and most film-like. The movie has been divided into 8 chapters.

The DTS-HD Master Audio 2.0 mono sound mix is era-appropriate. The dialogue, John Barry’s unusual background music, and the sound effects are all blended seamlessly into a single track. There are no problems with age-related hiss, crackle, hum, or thumps.

Audio Commentary: film historian Kat Ellinger provides another of her rambling, rather disorganized discussions about the movie. Though she does offer decent research on some of the actors and behind-the-scenes personnel, she also gives way to her tendency to veer off into sideline discussions of rather unrelated matters: Jack Clayton’s directorial career, Roman Polanski’s Repulsion, what the film might have been like if directed by Ingmar Bergman.

Kino Trailers: The Queen of Spades, Room at the Top, A Child Is Waiting, Mirage, It Always Rains on Sunday.

An interesting and altogether absorbing look at aging as seen through the eyes of an impoverished woman, Bryan Forbes’ The Whisperers demands to be seen and better appreciated by a larger audience. The Kino Blu-ray offers outstanding picture and sound for a film of this vintage and comes most highly recommended.

It's many years since I saw this powerful film so I'm looking forward to watching it again. Bryan Forbes was so skillful in his writing and direction to be able to realistically portray how life was for many people in the Britain of the 1960 such as The Whisperers, The Angry Silence, The L-Shaped Room etc.

Douglas R said:
It's many years since I saw this powerful film so I'm looking forward to watching it again. Bryan Forbes was so skillful in his writing and direction to be able to realistically portray how life was for many people in the Britain of the 1960 such as The Whisperers, The Angry Silence, The L-Shaped Room etc.
Click to expand...

I agree with you. He achieved an enviable body of work during this period, all of which have stood the test of time.

WHISPERERS is a powerful look at the elderly poor, but it is relentlessly bleak and doesn't make for a good repeat-view movie. I actually saw this at college in '69 0r '70, and have no desire to own it.
You must log in or register to reply here. 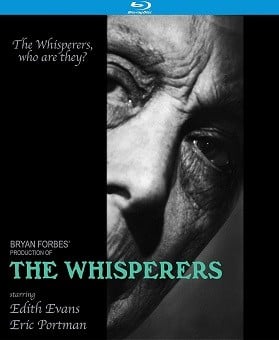