After their beloved Emmy-winning situation comedy My World and Welcome to It, based on the works of James Thurber, crashed and burned after one season on NBC, Melville Shevelson and Jack Arnold simply packed up their bags, left the network, and crafted a feature film based on their Thurber-esque enthusiasm. The result was The War Between Men and Women, a mostly unfunny domestic comedy-drama with a movie star (Jack Lemmon) basically replacing the small screen’s William Windom in the leading role.

After their beloved Emmy-winning situation comedy My World and Welcome to It, based on the works of James Thurber, crashed and burned after one season on NBC, Melville Shevelson and Jack Arnold simply packed up their bags, left the network, and crafted a feature film based on their Thurber-esque enthusiasm. The result was The War Between Men and Women, a mostly unfunny domestic comedy-drama with a movie star (Jack Lemmon) basically replacing the small screen’s William Windom in the leading role but without the dry irony and genuine affection for this precocious world of put-upon hubbies at the mercy of women, children, and animals of all persuasions. Some of the motifs used in the movie were carried over from the television adaptation, but a sense of nihilistic nastiness and dyspepsia lingers over most of the movie making it not much fun to watch if, one must admit, occasionally interesting to see how it was put together.

Cartoonist Peter Wilson (Jack Lemmon) has made a comfortable living drawing squiggles that represent man at the mercy of predatory females, misbehaving children, and confrontational dogs, and he’s lived his life pretty much isolated from those irritants as much as possible as well. But, when he meets divorcee Terry Kozlenko (Barbara Harris) at his oculist’s office (where he finds he’s going blind and desperately needs an operation), their quirky chemistry together inevitably leads to marriage. She has three children (teen Lisa Eilbacher, pre-teen Lisa Gerritsen, and six-year old Moosie Drier), a pregnant dog, and a globe-trotting photojournalist ex-husband (Jason Robards) who pops into their lives during their wedding and occasionally in the months afterward while Peter desperately tries to hide the fact from Terry that he’s going blind fearful of being a burden to his new family.

Very little about the make-up of the cast of characters and the motivations behind their actions makes sense in Mel Shavelson and Danny Arnold’s screenplay: why do these two people without anything much in common and with a prickly, decidedly non-affectionate enmity toward one another decide to get married (it can’t be just compatible sex together though that seems to be the only motivation suggested)? Why would anyone who’s been told he’s going blind and needs an operation put it off until the vision is completely gone when your means of earning a living requires the ability to see? Why would a newly married couple allow an ex-husband the run of their home and a say in their vacation plans? Why would a husband who allegedly loves his wife not share with her his health problems? The movie runs almost two hours with these brain-numbing questions continually frustrating the viewer for lack of answers. Brought over from the television adaptation, however, are the main character’s breaking the fourth wall and speaking directly to the audience (it doesn’t work here at all), some fantasy segments that end abruptly with the main character always in a pickle, as well as the precious Thurber drawings depicting the hapless man at war with an aggressive world, and the film’s best moments are those which involve those cartoons, especially a husband-wife fight which Peter copes with by drawing his male-dominated retaliation toward the opposite sex on the walls of their vacation house. Also on the positive side are some tender scenes between the reluctant father (who’s far better at parenthood than he ever imagined) and his fear-ridden stepson, and the film uses a good quarter hour near its end picturing in words and drawings James Thurber’s “The Last Flower,” a parable about the inevitability of life everlasting.

Jack Lemmon seems a little too brittle and nasty and is quite often off-putting as the Thurber-like Peter Wilson, the kind of person most people would go out of their way to avoid meeting despite his celebrity, and Lemmon shares not one speck of chemistry with Barbara Harris who seems a bit zombie-fied through much of the film mumbling her lines and not really connecting with anyone apart from one priceless moment where the Tony-winning singing actress croons Marvin Hamlisch’s “You and Me” with Jason Robards. For his part, Robards tries too hard to pull off a Gig Young-kind of charm as the ex-husband, but he ends up mostly self-conscious and ineffectual. Lisa Gerritsen was also a member of the television cast of the Thurber series (though she’s playing a different character here) and emerges as the best performer of the three children. Lisa Eilbacher is stuck with a subplot about dating a boy her mother doesn’t approve of that goes nowhere, and Moosie Drier is one-note as the scared little boy who sleeps in the doorway of his parents’ room (so nearly blind Peter can stumble over him every time he tries to leave his bedroom). Herb Edelman does fine as Peter’s literary agent, and Ruth McDevitt has a couple of one line zingers during some party scenes.

The film has been framed for home video at 1.78:1 (despite the liner notes which claim 1.85:1) and is presented in 1080p using the AVC codec. Sharpness is really excellent, and color and saturation levels are all one could hope for including very appealing skin tones. But the transfer is almost ruined by a heavy spray of dust and dirt specks which are especially prominent in the opening reels and near the close. Other damage and reel change markers aren’t present, but the transfer needs some massive clean-up. The movie has been divided into 8 chapters.

The DTS-HD Master Audio 2.0 mono sound mix is exactly what one would expect for a film of this era. Dialogue has been professionally recorded and has been mixed well with atmospheric effects which occasionally capture the haphazard lifestyle of 1970s Manhattan and the pop stylings of composer Marvin Hamlisch (whose vamp used here would turn up again a few years later for “Dance Ten, Looks Three” in A Chorus Line). Engineers have done a more than adequate job cleaning up the soundtrack and eliminating any age-related problems with hiss or crackle.

There are no bonus features on this release.

The War Between Men and Women was one of Jack Lemmon’s most notorious flops of the 1970s, and it’s easy to see why it didn’t catch on with the general public with its acerbic main character and a series of prickly encounters between characters that don’t leave anyone feeling all that good. Some video clean-up to eliminate an abundance of dust specks would have been welcome for the transfer which otherwise looks very nice. 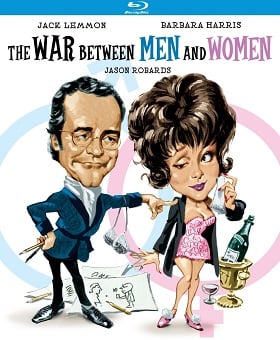