Recommended for fans of The Walking Dead 4 Stars

Millions of viewers tuned in to the premiere of season 7 of The Walking Dead on October 23, 2016, to see the resolution of the cliffhanger that ended the previous season.  Rick Grimes(Andrew Lincoln) and his allies found themselves captured by Negan(Jeffrey Dean Morgan) and the Saviors, and Negan had selected his victim to bludgeon to death as the 6th season concluded.  This 5 disc Blu-ray collection of The Walking Dead season 7 is being released in advance of the premiere of season 8 on October 22, 2017.

The first episode of season 7 resolves the cliffhanger of the identity of Negan’s victim to bludgeon to death with his bat, “Lucille”, to set an example for the prisoners. Spoiler alert follows for anyone who has not seen the episode or browsed the internet since October 23, 2016: Abraham(Michael Cudlitz) is Negan’s first victim, with Glenn (Steven Yeun) following Abraham as Negan retaliates to a blow struck by Daryl(Norman Reedus).  Daryl is quickly taken into Negan’s custody and sadly underutilized for the first half of the season.

As with other seasons of The Walking Dead, the 2016-2017 season 7 was broken into halves with part 1 consisting of 8 episodes airing in late 2016 with the last 8 episodes airing after a brief hiatus in early 2017.  The first half of the season can be difficult for fans to watch as Rick’s group is brutalized by Negan and the Saviors as they work through their grief over the losses of Abraham and Glenn.  In a sense, the fans were brutalized as much as Rick’s survivors in the first 8 episodes as the fans were grieving beloved characters just as much as the players in the drama.  Perhaps not by coincidence, the ratings dipped moderately and temporarily for the unpleasant episodes following the premiere.

Season 7 sees the introduction of King Ezekiel(Khary Payton) and the Kingdom as Carol (Melissa McBride) and Morgan (Lennie James) discover another refuge of survivors of the un-dead apocalypse in the storyline that adapts issue nos. 101 through 114 of The Walking Dead comic book series written by executive producer Robert Kirkman.

The second half of the season sees some reunions of some characters long separated from each other as Rick’s people and other enclaves of survivors debate and clash as they consider teaming up against Negan and the Saviors.  The last 8 episodes of this season make better viewing as the viewers, like the players, are not forced to continually confront the aftermath of Negan’s brutality in the first episode of the season.  As with many of the survivors, Rick takes some time in planning his next move as he and the others cope with existence in the Saviors’ world.

All 16 episodes from the seventh season are included in this 5-disc set.  The special features are relegated primarily to disc 6.  The episodes are as follows:

The Walking Dead The Complete Season 7 appears on Blu-Ray in 1080p in its original 1.78:1 aspect ratio as originally filmed.  Contrast and fine detail are terrific, with solid blacks and nice shadow detail.  Colors and skin tones tend to be subdued as a deliberate artistic choice.  As with earlier season, this set presents an excellent video presentation of the series that surpasses the quality of broadcast presentation on cable, satellite, and/or streaming.

The English Dolby TrueHD 7.1 soundtrack provides immersive and impressive directional audio.  The sound mix is low at times for dialogue but sound effects are mixed well with the spoken word to make the latter intelligible.

There is a wealth of special features divided into 2 categories, Deleted and Alternate Scenes, and Featurettes. In addition, there are audio commentaries on 6 episodes.  The special features include all of the following:

Featurettes
Inside The Walking Dead: All 16 episodes have a brief behind the scenes vignette 3 to 5 minutes in duration with crew and cast discussing events in that episode.  These vignettes aired originally on AMC and appeared on the AMC website.

The Making of The Walking Dead:  All 16 episodes have additional featurettes of 3 to 5 minute duration consisting of behind the scenes footage and interviews with cast members.

In Memoriam: Executive producers, writers, and actors talk about the characters lost in season 7.(7:19)

A Larger World: Writers and executive producers talk about the diversity of sets and settings in season 7.(10:14)

Breaking & Rebuilding: Cast and crew discuss the emotional journey by Rick and the survivors in this season.(5:07)

A New Chapter of Fear: Cast and crew talk about the plot direction for season 7.(5:04)

Top Walkers: Behind the scenes of makeup effects for the walkers.(8:29)

Warrior Women: Cast and crew talk about the female characters.(7:36)

The Writers of The Walking Dead: Writers discuss their experiences in working on the series.(4:01)

Disc 1 also includes an AMC Network trailer(0:32) for other AMC shows prior to the main menu.

Also included is a paper insert with a validation code for Ultraviolet for those consumers who enjoy watching video on a tiny screen on a mobile device. 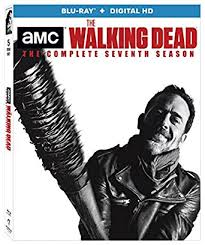