An interesting new direction for the series following the swan song of Rick Grimes. 4 Stars

Season 9 begins in relative peace following the defeat of Negan(Jeffrey Dean Morgan) and the “Saviors”.  Eighteen months have passed with Maggie(Lauren Cohen) managing the Hilltop in place of Gregory(Xander Berkeley).  Rick(Andrew Lincoln) has reluctantly spared Negan and is recovering from the death of his son, Carl(Chandler Riggs).  Since happy endings do not lend themselves to drama, the communities of survivors are divided in their loyalties between Negan and the victors of the “All Out War” of season 8.

Thematically, season 9 of The Walking Dead has a certain timeliness as a mirror to current events, with conflict arising out of divided loyalties between different community leaders.  Negan’s “Saviors” are not adjusting well to following Maggie, Rick, and Exekiel(Khary Payton), and the survivors are divided over the decision to spare Negan, especially Maggie, since she cannot forget Negan’s responsibility in the death of her love, Glenn.

The first episode of season 8 highlights Gregory’s efforts to sandbag Maggie as the new leader of Hilltop, after which the series jumps ahead one month to the second episode, and then a full 6 years elapse in a time jump before the end of episode 5, as Judith grows from toddler to young girl enforcer in the mold of father Rick and brother Carl.

As with other seasons of The Walking Dead, the 2018-2019 season 9 was broken into halves with part 1 consisting of 8 episodes airing in late 2018, and the last 8 episodes airing after a brief hiatus in early 2019.  The first half of the season represents several time jumps before settling into a narrative more than 6 years following the events of episode 1.

Season 9 introduces the “Whisperers”, a mysterious group of survivors that has taken to xo-existing with the “Walkers” even to the point of wearing ghoulish masks carved from dead bodies in their effort to blend in with the undead.  Alpha(Samantha Morton) is the leader of the Whisperers, and her group collides head on with the established characters after Alpha’s daughter Lydia(Cassady McClincy) is taken in by the community of the Hilltop.

The second half of the season sees some reunions of some characters long separated from each other as Rick’s people and other enclaves of survivors debate and clash as they consider teaming up against Negan and the Saviors.  The last 8 episodes of this season make better viewing as the viewers, like the players, are not forced to continually confront the aftermath of Negan’s brutality in the first episode of the season.  As with many of the survivors, Rick takes some time in planning his next move as he and the others cope with existence in the Saviors’ world.

The Walking Dead appears on Blu-Ray in 1080p in its original 1.78:1 aspect ratio as broadcast on AMC.  The series has traditionally been filmed on Super 16 mm film and then printed up to 35 mm, resulting in a very film-like grain structure.  This process creates a high level of contrast and detail in the final product.  Blacks are solid and shadow detail is fine, in a step above the compression issues that can plague this series on broadcast or streaming.

The Dolby TrueHD 7.1 audio offers nice directional audio for an immersive sound mix.  Suspense is generated in the subtleties of the soundtrack, with silence sometimes creepier than audible noises, as the sudden cessation of cricket song is usually a precursor to new developments.  Sound effects are employed discreetly and never obscure the dialogue.

Special features include all of the following:

What Comes After(45:19) Commentary by executive producers Angela Kang, Scott Gimple, and Matt Negrete.
Stradivarius(43:54) Commentary by actor/director Michael Cudlitz and writer/story editor Vivian Tse.
The Calm Before(57:43) Commentary by actors Khary Payton and Avi Nash, and writers Corey Reed and Geraldine Inoa.
The Storm(46:23) Commentary by executive producer Denise Huth, co-executive producer Matt Negret, and actors Melissa McBride and Seth Gilliam.
Also included in special features:
Seasons of Change(8:03):  Producers and actors discuss changes in season 9.
In Memoriam(10:36):  Characters who left this season are discussed by actors and producers.
The Whisperers: Behind The Mask(10:38):  The new antagonists are presented in this featurette.
Rick Farewell(4:14):  Andrew Lincoln’s departure of the role of Rick Grimes is highlighted.
Time Jump(3:00):  The narrative device of the time jump mid season is discussed.
Deleted Scenes(10:15)
Inside Episode…(16 featurettes offer brief insights into each season 9 episode).
Making of…(Each episode of season 9 has its own short behind the scenes featurette.
Also included is a paper insert with validation code for digital copy.

The Walking Dead Season 9 on Blu-ray is an essential for fans of the series.  The discs have a nice default feature that allows the viewer to resume the series from the previous disc rather than start all over with trailers and intellectual property disclaimers at the start of every disc.  The video and audio presentation continue to exceed broadcast quality, and the special features of commentaries and other treats offer something for everyone.  The Walking Dead Season 9 on Blu-ray is recommended to fans of this series, and is a great way to catch up before the premiers of season 10 in October 2019.

Extremely irritated that Best Buy has stopped their lenticular covers for Season 9 and Target isn't releasing a Steelbook for Season 9, although both have done so for the entire run of the series up until now.
You must log in or register to reply here. 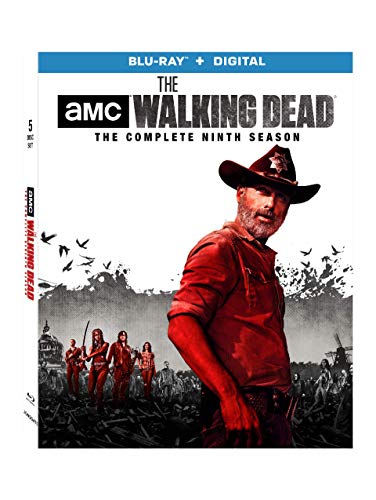