An action-filled season for viewers. 4 Stars

Viewers who believed that the storyline proceeded too slowly in earlier seasons of The Walking Dead had little to complain about in season 8.  This season delivered action and gunplay as the denizens of the Hilltop, the Kingdom, and the Scavengers finally confronted Negan and his Saviors in all out war.

Season 8 of The Walking Dead is the live screen adaptation of the “All Out War” storyline from the comic book series written by Robert Kirkman.  After suffering killings and other abuses at the hands of Negan(Jeffrey Dean Morgan) and his Saviors, Rick(Andrew Lincoln) and his survivors finally retaliate with assistance from the Hilltop which is now led by Maggie(Lauren Cohan), the Kingdom, and the Alexandrians.  Chandler Riggs has a worthwhile storyline that plays out in his swan song playing Rick’s son Carl.

Viewers who might have complained that there was not enough action in earlier seasons might feel vindication in season 8, although one might feel that it is hard sometimes to tell the players without a scorecard(which group is this again?).  The season foreshadows a future in which Rick and Negan live in peaceful coexistence, but it is difficult to see how the dots will be connected, if ever, to make that future come to pass from the unlikely antecedents of the present.  After Rick and Negan come into conflict during the events of this season, the same events lead into the finale which presents what is probably the final resolution of their conflict.  The resolution of Carl’s story plays out in a manner that resonates in interesting and unpredictable ways with his friends and family.

The episodes on this 5 disc set are as follows:

Season 8 of The Walking Dead appears on Blu-Ray in 1080p in its original 1.78:1 aspect ratio. The series appears somewhat grainier on Blu-ray than it does on broadcast or streaming. Fine detail and contrast are also more defined than their appearance in HD broadcasts.  The color scheme is deliberately muted as an artistic choice, and the Blu-ray discs present a seemingly accurate presentation of that choice.

The English Dolby TrueHD 7.1 audio is excellent as on earlier seasons on Blu-ray. Directional audio is employed selectively but with good impact.  The sound mix is an important and essential element of the suspenseful and dramatic mood of The Walking Dead.  Dialogue is usually appropriately audible with few exceptions, and music selections are used well in the mix to establish drama and context.

Most of the special features are located on Disc 5.  The only exceptions are the commentaries on Disc 1 with the following episodes:

The remaining special features include a commentary on “Wrath” by executive producer Scott Gimple and writer Angela Kang, as well as the following featurettes:

Carl Grimes:  Leaving a Legacy(8:47): Producers and cast members discuss the departure of Rick’s son during this season and its effect on the narrative arc of the series.

In Memoriam(9:57):  Featurette regarding the people and tigers(goodbye, Shiva!) that left the mortal coil during season 8.

The Price of War(10:34):  Cast and producers talk about the moral conflicts separating and defining Rick, Negan, and King Ezekiel.

Season 8 of The Walking Dead is an action filled season that provides some interesting conclusions for various people(and tigers).  The video and audio presentations are up to the high standards of previous season releases.  The special features are noticeably more limited than on earlier season sets, but what there is makes for worthwhile viewing.  The Walking Dead Season 8 on Blu-ray is an excellent way to catch up or revisit the season before the premiere of season 9 scheduled for October 7, 2018. 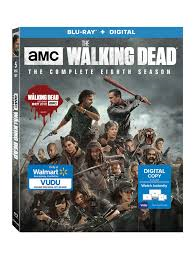