During the 1950’s, Swedish director Ingmar Bergman made the world take notice of him through his accomplishments Smiles of a Summer Night (1955), The Seventh Seal (1957), and Wild Strawberries (1957). With The Virgin Spring, his status as a master filmmaker and a key figure in world cinema was cemented with this simple yet potent retelling of a 13th Century medieval ballad of the brutal rape and murder of a farmer’s daughter and the vengeance sought upon her killers.

Set in the small Swedish village of Vange during the 14th Century, the story concerns the fate of young Karin (Birgitta Pettersson), the daughter of Per Tore (Max von Sydow) and Mareta (Birgitta Valberg), who is tasked by her father to take candles to the church per their religious custom. En route to the church, Karin crosses paths with three goat herdsmen, who repay her act of kindness of sharing her lunch with them by raping and killing her. In an ironic twist of fate, the herdsmen happen to seek shelter at Tore’s farm; when Mareta notices that they’re in possession of Karin’s clothes and Tore learns from servant girl Ingeri (Gunnel Lindblom) the truth behind why they have the clothes, they exact vengeance upon the murderers.

Remarkable in its simple – but not simplistic – ability to invoke both beauty and horror, Ingmar Bergman and screenwriter Ulla Isaksson transcended the original ballad the film was based upon and created a fantastic medieval atmosphere where the struggle between paganism and Christianity plays out before our eyes. It’s also an important transition for the director, as this would be the first film to utilize the talents of cinematographer Sven Nykvist, who would become a frequent collaborator with Bergman and further establish the visual style that would come to distinguish his later works. While it’s simple in its storytelling, the complexity of the issues buried throughout (questions of morality, shame, as well as religious beliefs) give the film something of a modern sensibility that has kept it relevant in more than half a century since its release.

Max von Sydow, continuing to add to his portfolio of impressive performances, makes for a wonderful Tore, bound by his newfound religious faith with some reluctance but all too human in terms of emotion, especially during the act of vengeance. Birgitta Valberg, as the devout Mareta, is equally impressive, making her character comprehensive while maintaining an air of humanity, especially during her scenes with Karin. Gunnel Lindblom makes for a ferocious Ingeri, the servant girl who secretly worships Odin while harboring a secret bitterness towards Karin. As Karin, Birgitta Pettersson gives her a sense of virtuousness which makes her eventual demise all the more heartbreaking. These four core performances give the film it’s heart and soul, further punctuating the central themes addressed by Isaksson’s script.

Taken from a 2K digital restoration of the original film elements by Svensk Filmindustri, the transfer of the film – presented in its original 1:37:1 aspect ratio – represents by far the best the movie has ever looked on home video. The grayscale is strong and even throughout, with a solid grain structure and fine details coming through clearly with very minimal instances of scratches, speckling, and dirt. It’s safe to say that you can retire your previous Criterion DVD and pick this one up.

The original mono soundtrack is presented in an uncompressed DTS-HD master audio track and just like the transfer, the movie has never sounded better. The original Swedish dialogue comes through clearly along with the few instances of music and the sound effects are presented strongly as well with little to no crackling or hissing present. An amazing track, given the fact that much of the sound had to be post-synchronized during post-production.

Pretty much everything from Criterion’s previous DVD release of the movie in 2006 is carried over here with one notable exception:

Commentary by Bergman scholar Birgitta Steene: This informative track goes a little deeper into the film, spotlighting on the themes as well as the context in how Bergman portrays them compared to his other films. Steene is well organized and thoughtful in her commentary and is very much worth a listen.

Interviews with actresses Gunnel Lindblom and Birgitta Pettersson (20:33): The actresses, who portrayed Ingeri and Karin respectively, reflect on the film, their memories from the set and their experiences prior to The Virgin Spring.

Introduction by filmmaker Ang Lee (7:04): The two-time Oscar winning director shares his appreciation of the movie, which he mentions as the very first art film he ever saw. He does mention some very key plot points about the movie, so you might want to watch this after you’ve seen the movie if you don’t want to have anything spoiled.

Audio from a 1975 AFI seminar by Bergman (40:27): In this amazing and insightful recording, Bergman cues us in on his methodology in filmmaking as well as sharing his thoughts on working with actors, dreams, and music among other topics. Well worth a listen if you’re a fan of the director.

Booklet featuring an essay by film scholar Peter Cowie, a piece from screenwriter Ulla Isaksson taken from original US press materials, and the original medieval ballad that served as the basis for the film

Notably missing from the booklet on the Blu-ray that was present on the DVD booklet was a statement by Ingmar Bergman on the rape sequence taken from around the time of the film’s release.

An important work in the Bergman canon, The Virgin Spring remains one of unvarnished beauty and power that hasn’t diminished one iota since its release. A film that deserves a place on any serious film lover’s shelf, Criterion’s Blu-ray upgrade surpasses its previous DVD release in terms of visual and audio quality. It will also be available as part of the upcoming Ingmar Bergman’s Cinema boxset from Criterion, but we suggest you take the time now to get acquainted with this potent masterpiece of world cinema. 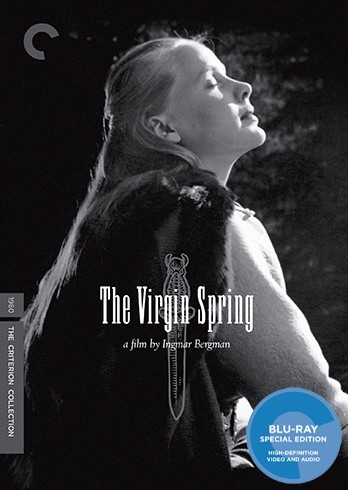