Forum List What's new Dark Style Change width
Log in Register
What's new Search
Menu
Log in
Register
Navigation
Install the app
More options
Dark Style
Close Menu
Posted on April 14, 2019 by t1g3r5fan
You are using an out of date browser. It may not display this or other websites correctly.
You should upgrade or use an alternative browser.
Loose Hammer sequel debuts on Blu-ray 3 Stars

In the late 1960’s and early 1970’s, Hammer Films made a series of films that either dealt with the prehistoric/ancient ages or had elements of them mixed in. Made to capitalize on the success of She (1965), The Vengeance of She was Hammer’s second take on the characters created by H. Rider Haggard – a loose sequel on the first. Previously released on DVD by Anchor Bay, Shout Factory – through the Scream Factory label – gives the movie it’s Blu-ray debut here.

A beautiful yet mysterious young woman named Carol (Olga Schoberova, credited here as Olinka Berova) is drawn by mysterious voices believing her that she’s the reincarnation of Ayesha, the ruler of the ancient lost city of Kuma. While being drawn towards the east, she meets Dr. Phillip Smith (Edward Judd), who not only follows her on her journey, but becomes infatuated with her. As they arrive at Kuma, the real reason for Carol’s summoning is made clear, and it not only puts her life in danger, but that of Phillip and the rest of Kuma as well…

Following on the heels of the success of She, The Vengeance of She has some value in entertainment, but really pales in comparison to the movie that came before it. A big part of that was that Ursula Andress, the actress who had memorably incarnated Ayesha (“She Who Must Be Obeyed”) in the previous film, declined to participate in this movie. When that happened, the script – by Modesty Blaise creator Peter O’Donnell – really deviated from the original H. Rider Haggard stories and resembled more of a retread of the previous film, set in modern times, than a true sequel (a point made in many of the reviews at the time). While it does boast some beautiful camerawork, decent special effects, and a solid Mario Nascimbene score (with a neat blend of jazzy saxophone solos by Tubby Hayes for Carol’s theme and some traditional orchestration), the real Achilles heel here is the sluggish direction by Cliff Owen; the film’s inconsistent pace really bogs down in the more mundane sequences for basically two-thirds of the movie. In final observation, the film is a bit silly and enjoyable, but it plods heavier than it should be.

Cast in the lead, Olga Schoberova is obviously very beautiful and gives off an Ursula Andress-like vibe throughout; it would be the most notable role in a brief sojourn in acting for the former model. John Richardson basically gives an extension of his part in She as Killikrates; Edward Judd – in what would be his last leading role of his career – is a decent, if somewhat bland, hero. Noel Willman – familiar to Hammer Horror fans as the villainous Count Ravna in The Kiss of the Vampire (1963) and as a troubled and mysterious doctor in The Reptile (1966) – makes a memorable impression as the elderly high priest of Kuma; the same can be said for Derek Godfrey, whose Men-Hari serves as the chief antagonist of the movie. Other notable appearances include Colin Blakely as the drunken millionaire friend of Phillip, Jill Melford as the millionaire’s wife, George Sewell as another friend of Phillip’s who accompanies him in his search for Carol, Hammer semi-regular Andre Morell as a mystic who becomes a victim of one of Men-Hari’s spells, and Daniele Noel as one of Killikrates’ servant girls.

This Blu-ray release preserves the original 1:66:1 aspect ratio in a new 2K scan of the original film elements, presumably from a print of the US release – as evidenced by the 20th Century Fox logo at the beginning of the movie. Film grain is organic throughout with fine details rendered faithfully along with the color palette; evidence of age related artifacts are apparent in some scenes (scratches, dirt, dust, speckling, etc.), but not truly enough to distract from viewing. Overall, it’s an improvement over the old Anchor Bay DVD and represents the best the movie has looked on home video.

The original mono soundtrack is presented on a DTS-HD Master Audio track for this release. Dialogue is clear and strong, with solid ambiance and fidelity given to Mario Nascimbene’s score (and musical effects) without being obtrusive on the sound mix. There’s very minimal instances of age related problems – distortion, hissing, crackling or popping – on this track, again making this an improvement over the old Anchor Bay DVD. Final note: at the end of the movie, there’s a brief note that says “Audio restoration done by Brett Cameron”, so kudos to him for this solid track.

Interview with clapper/loader Trevor Coop (5:42) – In this short new interview, the clapper/loader shares his memories of the project and how he survived working under focus puller Maurice Arnold.

World of Hammer – Lands Before Time (24:40) – The 1990 episode – narrated by Oliver Reed – of the retrospective series goes over Hammer’s prehistoric cycle of films.

While it largely came and went without much fanfare from both critics and audiences alike, The Vengeance of She – like much of Hammer’s catalog of titles – has survived and has attained a small cult following. Shout Factory has done a solid job with this release, with good marks for both audio and visual quality along with some decent special features. Recommended for fans of the Hammer Films catalog or fans of the movie in general.

There's a small mistake in the distributor in which it states Kino Lorber instead of Shout. Cheers.

Got it fixed. Thanks for bringing the mistake to my attention.

Aah! Olga Schoberova! I remember her on the front cover of Playboy long. long ago. A total fantasy figure for healthy young men! Once seen, never forgotten. If I can find that photo, I'll upload it into the Blondes thread in the After Hours Forum.
Last edited: Apr 15, 2019
You must log in or register to reply here. 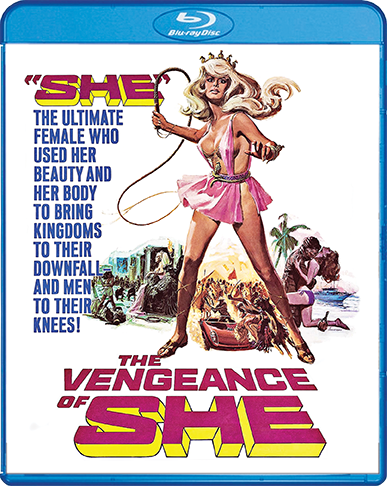