Forum List What's new Dark Style Change width
Log in Register
What's new Search
Menu
Log in
Register
Navigation
Install the app
More options
Dark Style
Close Menu
Posted on January 6, 2021 by Matt Hough
You are using an out of date browser. It may not display this or other websites correctly.
You should upgrade or use an alternative browser.
Up and down second season of macabre stories 3 Stars

As with season one, the second season of the revamped The Twilight Zone offers decent but often less than extraordinary storytelling.

CBS All Access had a reasonable enough amount of success with the first season of the rebooted The Twilight Zone to order a second season of ten additional episodes. While the new season offered an impressive guest star line-up, many of the season’s installments were no more satisfying than the first season’s efforts. One positive benefit from the first season was shorter run times for the episodes (none run longer than forty-three minutes and several are barely a half-hour long) meaning that most of the stories didn’t overstay their welcomes, but there was too much emphasis on alien takeover stories this season, and stories that owed too much of their narratives to various movie hits like The Thing, Groundhog’s Day, and Invasion of the Body Snatchers meant that the tales were often too familiar for total satisfaction.

The season began with what amounted to its best installment “Meet in the Middle.” A tragic story of psychic romance gone wrong, “Meet in the Middle” found two lonely souls (Jimmi Simpson, Gillian Jacobs) in separate towns somehow connecting with their minds and striking up such a depth of feeling between them that they decide to meet in the flesh and try to make a life for themselves. True to The Twilight Zone, things don’t go as planned. Another of the season’s best episodes was “The Who of You,” a clever and surprising tale of identity transference as a desperate actor (Ethan Embry) down on his luck decides to rob a bank and finds he can escape by transferring his identity from one person to another by making direct eye contact with another person. It’s a neat, twisty tale featuring wonderful supporting performances by Danial Sunjata and Billy Porter.

But the various alien takeover narratives in “Downtime,” “8,” “A Human Face,” and the season finale “You Might Also Like” (which harks back to “To Serve Man” from the original series) are predictable, overlong, and mostly uninteresting dragged down by spotty writing (“A Human Face” is the nadir of the season) and thwarting the best efforts of guest stars like Morena Baccarin, Colman Domingo, Tony Hale, Christopher Meloni, Jenna Elfman, Joel McHale, and Gretchen Mol.

Magical objects which cause havoc in the lives of ordinary people were very popular in the original series (“The Mirror,” “A Most Unusual Camera,” “A Penny for Your Thoughts,” “The Dummy,” “Living Doll”), but “Ovation” with its magical coin which brings instant music success to its owner doesn’t belong in the same league with these memorable episodes from the original series. Likewise, “Try, Try” with its tired time loop scenario also goes nowhere despite excellent performances by Topher Grace and Kylie Bunbury. Better is “A Small Town” where a scale model of a town serves its owner (Damon Wayans, Jr.) well as he tries to resuscitate his dying village crumbling in the hands of its corrupt mayor (David Krumholtz).

Oscar and Emmy-winner Jordan Peele continues to serve as producer and host of the series (and writes occasional episodes), and his narrations attempt to set the menacing tone for The Twilight Zone, but Rod Serling’s remain large shoes to fill in that capacity, and Peele doesn’t quite manage it. The show’s producers, however, as they did during the first season, pay loving homage to the original show and its creator with a few Easter eggs planted in some of the ten shows (admittedly, fewer of these are noticeable in the second season). We are back once again in the Busy Bee Diner, and we also observe the Kanamits from “To Serve Man” and the name Dingle above a flexed muscle on the logo for a moving van.

Here are the ten episodes which are present on the three DVDs which make up the second season set of this series:

The program’s 1.78:1 widescreen television aspect ratio is presented faithfully with anamorphic enhancement. Overall, for standard definition transfers, the images are sharp and clear with strong color and good black levels. While one usually expects slight aliasing or moiré patterns in standard definition transfers, none of these anomalies were glimpsed here. The episodes have been divided into 6 chapters.

The disc offers Dolby Digital 5.1 (the default and by far the stronger of the two tracks) and 2.0 stereo surround tracks with each episode. The 5.1 track offers outstanding fidelity especially for a television series with lots of activity in the surround channels and bold use of music and sound effects to keep things lively and interesting, even when things on the screen are silly or infuriating. Dialogue has been masterfully recorded and is usually placed in the center channel though there is occasional directional dialogue.

Deleted/Extended Scenes: spread over the three DVDs are eight sequences either cut from the shows or are extensions of clipped scenes from the episodes. These are attached to the shows for which they are associated.

As with season one, the second season of the revamped The Twilight Zone offers decent but often less than extraordinary storytelling. The ratio of good to ineffectual tales is about the same as season one, but the run times are shorter making the less than entertaining stories less painful to endure. For fans of the show, I would suggest waiting for the Blu-ray MOD release which is said to be forthcoming.

I'm bumping this review up for those who might have missed it earlier in the week when I posted it. There were some questions about it in another thread.

Excellent review, Matt. I think it was a very fair assessment of what works and what doesn’t work in this latest season. I’m glad the show exists but wish it had a little more to it. But I definitely found this season easier to watch than the first, even if the payoffs still weren’t quite there.
You must log in or register to reply here. 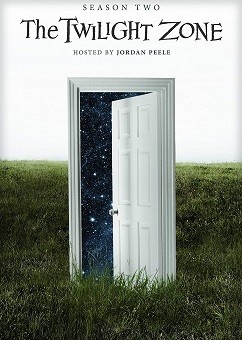