Forum List What's new Dark Style Change width
Log in Register
What's new Search
Menu
Log in
Register
Navigation
Install the app
More options
Dark Style
Close Menu
Posted on February 13, 2020 by Matt Hough
You are using an out of date browser. It may not display this or other websites correctly.
You should upgrade or use an alternative browser.
Can't match the original but a game attempt. 3.5 Stars

While the newest incarnation of The Twilight Zone can’t hold a candle to the original series, the 2019 reboot of the show offers some intriguing scenarios even if their resolutions sometimes come up lacking and their morals often seem shallow or obvious.

“The Twilight Zone” is one of the most recognized phrases in the English language. Forget the series itself for a moment; the phrase itself has now come to represent anything strange, other-worldly, unexplainable. Is it any wonder, then, that CBS/Paramount has been desperate to relaunch the series time and again after its successful, award-winning run from 1959-1964. The 1985 and 2002 reboots had their moments but didn’t have anything like the lasting impact of the original, and now CBS/Paramount has tried for the third time to reimagine the series with writer-producer Jordan Peele at the helm. What has emerged is a series true to the spirit and intention of Rod Serling’s original show but without the genius storytelling abilities that the original series displayed in its finest moments. With only ten episodes to produce for CBS All Access, the producers of this new take had every chance to get it right, but the resultant episodes suffer from bloat and an uncanny inability to consistently deliver power-packed resolutions to often intriguing bizarre frameworks.

As with the original work, The Twilight Zone takes everyday individuals and places them in situations dealing with something decidedly not everyday: a depressed husband who comes into possession of a gun with a mind of its own, a youngster who catches the zeitgeist and rides it to the Presidency, a well-to-do mother who finds herself being herded into an immigrant internment camp, astronauts on their way to Mars having possibly left behind an annihilated Earth, a mother and son who are at the mercy of an unrelenting highway patrolman, a meteor shower which has a derogatory effect on all of the men in a small town: all set-ups for The Twilight Zone’s unmatched ability to create parables combining unusual storytelling with sociological implications. But for all of the clever expository situations and all of the current headline themes the stories touch on (facial profiling, immigration insensitivity, firearm restrictions, combative men in the MeToo movement), most of these ten tales don’t manage to bring their narratives to a close in a satisfactory way.

There are a couple of exceptions: “Replay,” the best of the season’s episodes by far, makes vivid points about heinous racial profiling with its Groundhog Day-like scenario featuring a mother who can rewind time backward through a supernatural camcorder in order to keep herself and her son safe from a vicious patrol officer who has it in for them. “The Wunderkind” likewise makes salient points about our dangerous current day political climate by having an eight-year old rise to the nation’s highest office without being fully equipped for the job. On the other hand, a couple of episodes completely spin off the rails without providing satisfactory conclusions including “A Traveler” about an alien among us here to scout out the territory for future takeover, “Six Degrees of Freedom” which is a long voyage to Mars for a group of astronauts with a very small twist not worth the trip, and, most disappointingly, the season finale “Blurryman” with a writer for The Twilight Zone being harassed by a stalker that tries to be eerie and terrifying and succeeds at being neither. Throughout, you’ll be reminded of episodes from the original series like “The After Hours,” “A Thing About Machines,” “It’s a Good Life,” “The Monsters Are Due on Maple Street,” and “Time Enough at Last” which share themes with some of the episodes but which made their points more distinctly and in a lot less time (25 minutes as opposed to the 37-56 minutes that these episodes run) and with no profanity (the F-bomb is dropped in every one of these episodes and usually more than once, almost always unnecessarily).

Excellent actors adorn the casts of these shows, among them Ike Barinholtz, Zazie Beetz, John Cho, Chris Diamantopoulos, Taissa Farmiga, James Frain, Betty Gabriel, Ginnifer Goodwin, Greg Kinnear, Luke Kirby, John Larroquette, Sanaa Lathan, Tracy Morgan, Kumail Nanjiani, Seth Rogen, Adam Scott, Erica Tremblay, Jacob Tremblay, DeWanda Wise, and Steven Yeun. Oscar and Emmy-winner Jordan Peele serves as producer and host of the series, and his narrations attempt to set the menacing tone for The Twilight Zone, but Rod Serling’s are large shoes to fill in that capacity, and Peele doesn’t quite manage it. The show’s producers, however, pay loving homage to the original show and its creator with a series of Easter eggs planted throughout these ten shows. Observant fans of the original will see brief glimpses of some familiar objects, names, and places in the first season: the Talky Tina from “Living Doll,” the Busy Bee diner and devil’s talisman from “Nick of Time,” a stuffed animal resembling the gremlin from “Nightmare at 20,000 Feet,” the ventriloquist’s mannequin from “The Dummy,” a mask resembling the visages of the people from “Eye of the Beholder,” the broken glasses from “Time Enough at Last,” and the names Dingle and Whipple from famous episodes of the show. Even Rod Serling’s visage adorns the back of one of the writer’s laptops in “Blurryman.”

Here are the ten episodes present on three DVDs in this four-disc set. The episodes with an asterisk (*) indicate an audio commentary accompanying the episode with the participants in parentheses).

The program’s 1.78:1 widescreen television aspect ratio is presented faithfully with anamorphic enhancement. Overall, for standard definition transfers, the images are sharp and clear with strong color and good black levels. Naturally, with the lower resolution come moiré patterns in several of the episodes and the lack of that extra dimension of crisp clarity that comes from a 1080p transfer. (The Blu-ray release also allegedly offers the episodes in black and white alternate versions.) The episodes have been divided into 6 chapters.

The disc offers Dolby Digital 5.1 (the default) and 2.0 stereo surround tracks with each episode. The 5.1 track offers outstanding fidelity especially for a television series with lots of activity in the surround channels and bold use of music and sound effects to keep things lively and interesting, even when things on the screen are silly or infuriating. Dialogue has been masterfully recorded and is usually placed in the center channel though there is occasional directional dialogue.

Each episode features in the menu an Episode Promo (usually a minute or so in length) and follows with an Opening the Door analysis featurette (1 ½ to 2 ½ minutes in length) where writers, director, and actors of the episode discuss the show’s themes and their impressions of the work.

Audio Commentaries: three are available (see episode listing above for participants) though none are truly revelatory. The one with “”Replay” is the liveliest, the one with “Not All Men” the dullest, and “Blurryman”’s attempts in vain to make sense of a messy, not fully realized thesis.

Deleted/Extended Scenes: nine scenes spread across the three episode discs attached to the episodes from which they have been extracted.

Crossing Over: Living in The Twilight Zone (28:30, 38:01): a two-part documentary on the making of the series with writer-producers Jordan Peele, Simon Kinberg, Win Rosenfeld, Audrey Chon, and Glen Morgan discussing their aims for the show and what they did to bring the work to the 21st century. Also commenting are actors from the various episodes as well as the show’s production designer, art director, cinematographer, costume designer, and composers discussing their roles in making the show timely and hopefully timeless.

Easter Eggs Revealed (2:30): does reveal some of the Easter eggs planted in the series but doesn’t catch them all.

Remembering Rod Serling (36:50): poignant recollections of the man and his influence on television history and on his family and friends. Excerpts from The Twilight Zone as well as from his lecture series as a college professor are shown.

While the newest incarnation of The Twilight Zone can’t hold a candle to the original series (a truly impossible feat anyway), the 2019 reboot of the show offers some intriguing scenarios even if their resolutions sometimes come up lacking and their morals often seem shallow or obvious.

Great review, Matt. I feel like you did a very accurate job at capturing what works and what were missed opportunities.

To me, the biggest problem is that they don’t use Peele as a writer. He shares a story credit with a few others on one episode and that’s it. Between his two theatrical films and his Key & Peele show, he’s one of the most distinctive voices working today, and whatever the reasons were, it’s a shame that the show is only using him as window dressing. Had he taken a stronger authorial role in the process, like Serling with the original, I think we could have had something truly special here.

Josh Steinberg said:
Great review, Matt. I feel like you did a very accurate job at capturing what works and what were missed opportunities.

To me, the biggest problem is that they don’t use Peele as a writer. He shares a story credit with a few others on one episode and that’s it. Between his two theatrical films and his Key & Peele show, he’s one of the most distinctive voices working today, and whatever the reasons were, it’s a shame that the show is only using him as window dressing. Had he taken a stronger authorial role in the process, like Serling with the original, I think we could have had something truly special here.
Click to expand... 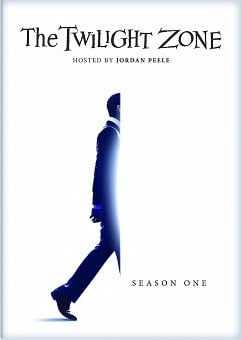